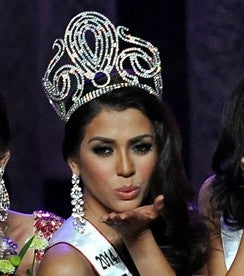 MANILA, Philippines—She hopes her win will serve as a respite for her townmates in North Cotabato province from the armed conflicts in Mindanao, Mary Jean Lastimosa told the media after her proclamation as Miss Universe Philippines 2014 in a glittery four-hour show on Sunday night.

“I hope [my title] can give inspiration to everyone, especially those in North Cotabato,” said the Filipino-Arabian beauty, who bested 39 other aspirants in pageant ceremonies at Smart Araneta Coliseum in Quezon City.

Lastimosa, 26, almost failed to join this year’s pageant because the previous age limit was 25 years old. But organizers decided to raise the age limit to 26 this year to accommodate those still qualified under the age requirement for other global competitions. Except for the Miss International contest that accepts only representatives aged 17 to 24, other beauty tilts allow women up to 27 years old to participate.

Lastimosa first stepped on the Binibining Pilipinas stage in 2011 when she was proclaimed second runner-up. On her second attempt in 2012, she failed to crack the Top 5 but took home the special awards Bb. Avon and Bb. Philippine Airlines.

“It’s my third time! I want to show everyone [to] ‘never say never.’ A dream is a dream. If you have a dream, work on it. If it’s in your heart, then never give up,” Lastimosa told the Inquirer in an interview immediately after her coronation.

This year, Lastimosa bagged the best in swimsuit award on top of earning the right to represent the Philippines in the Miss Universe pageant.

The only other woman to achieve the same feat was 2004 Bb. Pilipinas-Universe Maricar Balagtas, who was a nonfinalist on her first try in the Binibining Pilipinas pageant in 2000 and second runner-up on her second attempt in 2001.

Lastimosa’s previous titles include 2008 Mutya ng Dabaw and 2008 Reyna ng Aliwan. She also represented the Philippines in the 2012 Miss Asean pageant in which she placed in the Top 10.

Lastimosa hopes to continue the country’s four-year winning streak in the Miss Universe pageant, which started in 2010 when Venus Raj placed fifth. Shamcey Supsup finished fourth in 2011 while Janine Tugonon was a spot shy of the crown in 2012.  Ariella Arida finished third runner-up last year.

Four decades have passed since the country last held the title when Margie Moran won in 1973. Gloria Diaz was the first Filipino to wear the Miss Universe sash in 1969.

“She said she’ll help me out,” Guidotti said.

“I’m really going to work hard to win the crown back-to-back, for the Philippines,” she added.

The 24-year-old European Studies graduate of Ateneo de Manila University works as a technical assistant at Community and Family Services International. She was also proclaimed best in long gown in this year’s pageant, the same award Santiago won last year.

Also facing the challenge of giving the country a back-to-back victory is 2014 Bb. Pilipinas-Supranational Yvethe Marie Santiago from Albay province, who is also this year’s Bb. Avon and Miss Cream Silk.

Santiago, a certified public accountant who earned her degree from Bicol University, received her crown from Mutya Johanna Datul, the first Filipino and first Asian to wear the Miss Supranational crown.

Asked during the final round what inherent quality of a Filipino makes her stand out in beauty pageants, Santiago replied: “Confidence. Confidence in our own skin makes us feel very beautiful. Because of that, we shine and we show the best that we have.”

Santiago, who was crowned 2012 Miss Bicolandia, previously represented the Philippines in the 2009 Miss World University contest in South Korea when she was 17 years old. She took home the best in national costume award.

Rounding up the crop of winners is Kris Tiffany Janson, who was proclaimed Bb. Pilipinas-Intercontinental. She also was Miss Photogenic and won the best in national costume award. The 2009 Miss Cebu titleholder hopes to become the first Filipino to win the Miss Intercontinental pageant.

The Philippine Daily Inquirer is a media partner of the 2014 Bb. Pilipinas pageant.