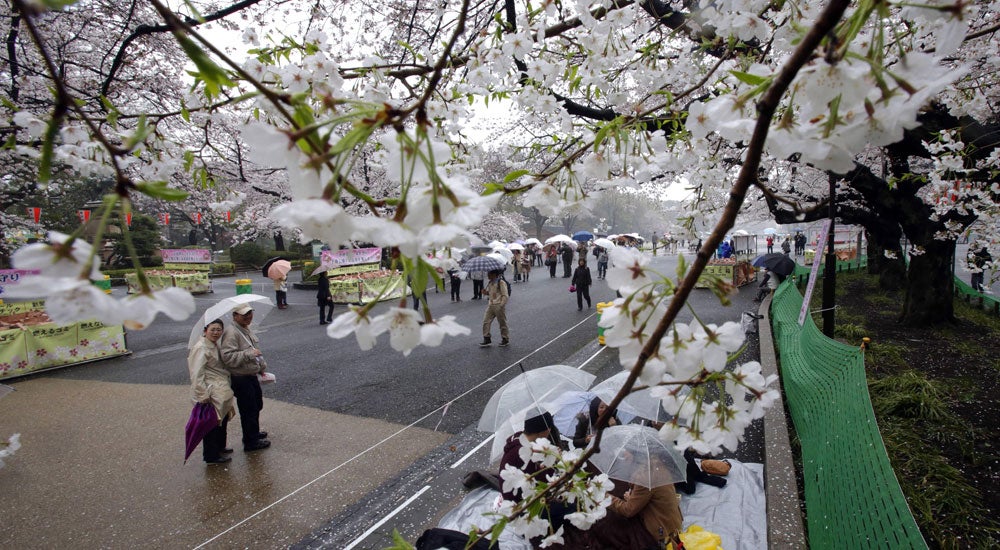 A group of people have a picnic under cherry blossom trees at Ueno Park in Tokyo, Sunday, March 30, 2014. AP

TOKYO — Spring in Japan brings explosions of pink and white cherry blossoms that provide a beautiful backdrop for picnics across this nature-loving country.

But it also heralds a mass outbreak of facemasks and speciality goggles intended to fend off clouds of pollen that make noses stream and eyes itch.

“I want to take my eyeballs out and wash them,” websites blare as they advertise eye clinics and remedies for hayfever sufferers.

For many, the runny nose and sneezing are a minor inconvenience, but for some, the allergy to pollen causes nasty congestion, headaches and a racking coughing. For the unlucky few, asthma and bronchitis can follow.

According to surveys, up to one out of every four people among Japan’s 128-million-strong population suffers from “kafun-sho” — literally “pollen illness”.

Pharmacies are stacked with surgical masks to meet demand that has swelled five-fold over the last decade, alongside glasses, tissues and a bevvy of medicines.

Air purifiers, bed cleaners, pollen-absorbing sprays and trench coats that repel pollen and water are also among “kafun-sho” goods, a market worth an estimated $1.5 billion annually, according to the Nikkei business daily.

The latest hit is the battery-powered “Kafun Blocker” a beekeeper-like nylon hood, that its maker claims “shuts out 99.99 percent of pollen” by taking air through a fan and a filter on its top.

Tokyo novelty electronics shop Thanko has sold the $40 gear “by the thousands” this year, manager Takahiro Sasaki said. “It is really popular among people who work outdoors, such as farmers.”

Weather presenters commiserate with viewers as they show special pollen maps, warning of the density of airborne particles at different locations, before they move on to graphics showing the spread of the celebrated cherry blossoms.

While these delicate blooms might appear to be at the root of hayfever-sufferers’ misery, they are relatively benign compared with pollen from ragweed, birch, grasses or other wild plants.

But by far the largest source of the irritant is the swathes of man-made woodland that sprang from the nationwide program of tree planting as Japan rebuilt after World War II.

Pollen from “sugi” — Cryptomeria japonica — an indigenous cedar-like Japanese evergreen, is held responsible for 70 percent of pollen allergies, and is at its most rampant in March and April.

A month later, “hinoki” — Japanese cypress — adds to the suffering, releasing clouds of pollen across the country.

Sugi — light, soft, fragrant and with a delicate patina — has been systematically planted as building material for centuries in Japan.

In the aftermath of WWII, the government led a drive to plant sugi and hinoki trees to meet surging demand for fast-growing, high-quality timber.

But the 1964 liberalization of timber imports started to squeeze domestic sugi products out of the market.

Many sugi forests were abandoned over the following decades without being logged or replanted, and, says Kimihiro Okubo of Nippon Medical School, that has led to a rise in pollen, which can travel 300 kilometers (190 miles).

Pollen production peaks when trees reach maturity at 30 years old, he said, with around 70 percent of sugi trees planted after the war now that age or older.

According to the Forestry Agency, planted sugi trees — both state and privately owned — account for 18 percent of all man-made and natural forests in Japan. Hinoki accounts for 10 percent.

Methods of treating sugi pollen allergy have improved since the first case was reported in 1963, said Okubo, an ear, nose and throat specialist.

Leading the way is “sublingual immunotherapy”, in which drops of allergen extracts are put under the tongue to be absorbed. Around a third of patients get rid of almost all symptoms through this method and 50 percent see their problems ease.

The government for its part has been reluctant to help stop planting sugi trees or cut them down.

But it has led projects since 1999 to plant saplings of sugi varieties which produce little pollen — as little as one percent of that produced by ordinary trees.

Sugi forests “serve a variety of public purposes such as national land conservation, prevention of global warming and cultivation of water sources,” said a Forestry Agency publication. “It is not desirable to log them at once.”

“Air pollutants, stress and the westernization of lifestyle including eating habits have combined to worsen symptoms of pollen allergy,” the ministry said in a 2009 report, a view shared by many experts.

Forestry Agency official Kiyohito Onuma said the ratio of sugi saplings of varieties which produce little pollen had constantly risen to reach 10.4 percent in 2012. About 15.2 million sugi saplings were planted in that year.

He added that experiments are under way at laboratories to develop saplings that produce no pollen at all, partly by genetic engineering.

“Sugi grows fast and it is so straight that it can be easily utilized as building material,” said Onuma, himself a hayfever-sufferer. “I don’t think production of sugi will ever be stopped.”

Airborne sugi pollen is now several times higher than in 1965, the Sagamihara National Hospital has estimated.

“The amount of airborne sugi pollen may probably peak in 2050” along with the number of patients, said Okubo. “I believe sugi pollen allergy will be definitely eliminated in 100 to 200 years.”