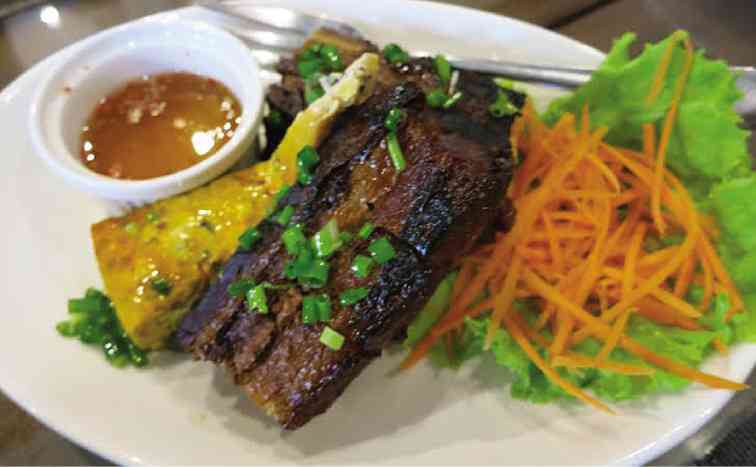 Recently I have been visiting places. Here’s a list of where I’ve been and what I found delicious and worth raving about.

When I asked him why he put up an Argentine restaurant in Manila, he said it was because of the many similarities between the Philippines and Argentina—the religion, culture, Evita Peron and Imelda Marcos.

The Argentine and Filipino dishes, which, though completely different from each other, are tasty, hearty, well-seasoned, and served family-style.

The chef also noted the growing popularity of wine in the country and is proud to serve Malbec at Gaucho. Argentina is fast becoming popular for its New World wines.

For lunch, I had an unforgettable Fugazetta, Argentina’s thin-crust pizza made with chickpea flour and topped with sweet onion, oregano and provolone cheese. It was delicious. Nothing complicated or fancy, just something light yet highly addicting. Imagine lightly crisp sweet onions spiked with herbs over a generous slathering of rich and creamy provolone on a beautifully textured thin crust.

Another favorite of mine was the stew called Locro, tasty white beans with hominy and slivers of tender beef, seasoned and spiced just right. This traditional stew served with homemade bread (brick-oven-baked that’s crisp on the outside and soft on the inside, to mop the stew with) is something I would go back to Gaucho for. Again, nothing fancy, just tasty.

I also found the cured ox tongue salad with fried garbanzos quite refreshing—perfect to start your meal, especially on a warm day.

Unfortunately I missed out on the roast, which the resto cooks fresh and before your very eyes at dinner. Markus describes it as the highlight, using “a unique roasting process called ‘a la cruz,’ with the meat supported on metal crosses and slow-roasted over low temperatures.”

This is how the gauchos or Argentine cowboys (who work in the country’s vast plains) roast their meat. The result: meat that is tender, charred and full of flavor.

The roasts are served with Argentine-style Chimichurri sauce and an array of pickled vegetables. Gaucho offers organic pork, US beef and Australian lamb (tel. 6543148).

I love pork, especially liempo. Last Saturday, I had Com Suong Cha, a delicious, thickly sliced piece of prime liempo that has been grilled to perfection, but tender, juicy and flavorful on the inside.

Bawais’ inihaw na liempo was one of the most delectable I’ve had, considering how thick it was. It tasted just as it should— totally flavorful, enhanced by nuoc cham (a traditional dipping sauce) served with interesting mushroom egg pie.

The original Bawais (the Vietnamese word for “grandmother”) can be found in Tagaytay and is owned by Virgilio Tatlonghari, who is married to a Vietnamese lady, My Duyen.

Their restaurant came to be after the couple built their retirement home, which soon became famous for Mrs. Tatlonghari’s home-cooked Vietnamese specialties.

As their guests started to rave about their dining experience in the Tatlonghari residence, the couple figured it might be a good idea to turn home cooking into a business. Which they did, immediately after Mrs. Tatlonghari, their eldest son Victor and youngest child Paul Anthony got back from culinary school in Saigon.

The Tatlongharis now welcome diners to their Tagaytay home on weekends, and are part-owners as well of the new Bawais in Katipunan, QC.

While visiting my friends Myleen and Colleen Huenefeld, who are artisanal sausage makers, I had a delectable morcilla (a traditional blood sausage from Spain) de cebolla sliced, pan-fried in olive oil and served with onion confit. Yummy!

I used the same morcilla in my Fabada and I was not at all disappointed. It was perfectly balanced and well-rounded, with no piercing flavors or aftertaste. It enhanced my bean stew. It was magical.

“After a few unsuccessful attempts to make a good morcilla, we decided to import our blood ingredient from Spain as local blood tends to coagulate. Our morcilla is seasoned with smoked pimentón (paprika), garlic, salt, pepper and spices.”

Morcilla de Arroz is great served as a tapa: simply slice it, dip in flour, and pan-fry in olive oil.

Morcilla de Cebolla can flavor any stew, but is also wonderful sautéed with some raisins and pine nuts, or simply stir-fried into some scrambled eggs.