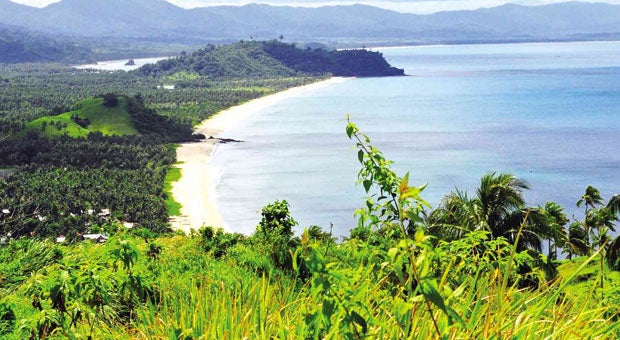 LONG BEACH This 14-kilometer stretch of shore covered with powdery white sand in San Vicente town, in the island province of Palawan, promises to become one of the Philippines’ top tourist destinations, as development continues involving the tourism industry’s big investors. PALAFOX ASSOCIATES/CONTRIBUTOR

SAN VICENTE, Palawan—Imagine trekking along 14 kilometers of unspoiled powdery white sand with nothing but the vast expanse of the West Philippine Sea and endless rows of lush forests and old coconut trees on both sides.

If you insist on been-there-done-that bragging rights, Palawan province’s Long Beach should top your list even before the first hotel hove into view and upbeat party music supplanted poignant evenings.

It’s easy to tell this place is going to transform in a big way. A

2-km-runway airport nearby is due for completion this year and promises to dramatically boost tourist traffic. The cementing of the access road from the capital of Puerto Princesa City, or what used to be a decrepit logging road through old growth forest, is just about finished and will effortlessly link the place to the urban hub.

Most notably, the tourism industry’s big guys are already on board. They have figured this place out long before the first backpackers wandered into it. Among them was Anscor, which is into high-end island-resort development. They have locked in the prime locations along Long Beach, pouring in an estimated P1 billion in acquisitions in the last five years, according to local officials.

“There is no doubt that Long Beach is destined to become a world-class tourist destination. With its 14.7-km-long pristine stretch of beach, it is one of the longest, if not the longest, white-sand beach in the Philippines,” San Vicente Mayor Pie Alvarez told the Inquirer.

Alvarez is presiding over a meticulous planning process, which she hopes will ensure that tourism development can take place in Long Beach with optimum benefits to the local economy, “without sacrificing the environment.”

“We wish to learn from the best practices of tourism destinations around the world and create our own unique destination,” Alvarez said.

Long Beach is a seemingly endless stretch of sand that arches along the western coastline of Palawan. From one’s seat as the plane descends, one can’t miss the glistening strip of sand at the edge of the lush forests of central Palawan. As one stands from one end of the beach, it is hard to see where it ends even on a clear day.

San Vicente’s planners can’t resist the comparison to Boracay Island in Panay that currently draws the bulk of beach hounds in the country. By its sheer size, Long Beach is Boracay magnified four times.

“One of our advantages is we have the opportunity to plan first before we build,” said municipal tourism officer Lucy Panagsagan.

The local government has a good reason to be cautious on how they should go about exploiting the area. Despite being the main hub of a logging operation in the late ’70s, San Vicente remains the most densely forested area of Palawan, with 86 percent of its total land area still covered by trees.

Its marine environment is host to an abundant fisheries resource. The town wants to make sure the fish remain, so they have designated at least six sites as fish sanctuaries or no-take zones.

A large chunk of the forest has been classified as a protected area under the National Integrated Area Protected Program. Nearly all wildlife species in the province can be found in San Vicente, including those considered to be at the brink of extinction such as the Philippine forest turtle (Heosemis leytensis), which can’t be found anywhere else in the world.

Long-term investors from Manila and Cebu started the ball rolling for choice slices of real estate along Long Beach just over five years ago. Locals sold their land for as low as P70 per square meter, recalled Francis Picardal, a local entrepreneur.

Vice Mayor Antonio V. Gonzales recalled that at one time in 2007, he facilitated the acquisition of prime Long Beach properties for five prominent businessmen from Cebu province who shelled out P5 million each.

Except for a handful of families, most of the original owners of the land, including the Agutaynen natives of San Vicente, have sold out to developers from out of town.

“It’s a sad reality that the original landowners were not able to hold on a bit longer to their properties,” Picardal said.

Getting to San Vicente these days still requires an attitude most often alien to the soft-heeled. The interior roads from Puerto Princesa City are rough and travel can take as long as four hours.

San Vicente, at the moment, is still a backpacker’s delight. One can hop into an iconic rural bus usually packed to the roof, take a more comfortable shuttle service at P300 per passenger, or hire a van from Puerto Princesa City for somewhere between P6,000 and P7,000 per day.

The town proper is dusty to rustic and the only way to get around if one doesn’t have one’s own vehicle is to ride a habal-habal, a motorcycle with a slightly extended backseat for another passenger (or more, as is often the case).

The municipal tourism office lists just about 48 bed accommodations available in the town proper, mostly family-run lodging facilities made of light materials. One German entrepreneur with a Filipino wife built a hotel at the edge of town toward Long Beach that offers more familiar amenities, including a Wi-Fi connection and an infinity pool looking out into the ocean. Lodging rates range from P1,500 to P3,500 per day.

Last week, Palafox planners submitted to the municipality of San Vicente a draft tourism master plan. Among their major recommendations was to set a 50-meter exclusion zone from the high tide line of Long Beach, a distance twice the usually prescribed 25-meter no-build zone for coastal development.

The potential as a nature attraction is huge, according to the planners. Among the activities that could attract investors and visitors are windsurfing, surfboard riding, scuba diving and snorkeling, mangrove tours, rainforest treks, bird watching, island hopping, camping and sightseeing.

Gonzales said they would institutionalize their master plan by legislating their tourism master plan through an ordinance. It is the bible that property developers like Anscor, Big Foot Inc., Discovery Shores and other key tourism players have been waiting for so they can make their move.

For starters, Gonzales said, Tieza, the government’s tourism infrastructure arm, “is helping us in a major way”and has committed to help fund the completion of the town’s drainage plan and other turnkey infrastructure requirements targeting Long Beach.

“That’s what developers are waiting for. Once we have these things in place, development will naturally follow, Francis Picardal, a local lodge owner, said.

San Vicente had also enlisted in the Climate Change Commission’s “Ecotown” program to develop its own preparedness to confront nature-induced calamities brought about by changing weather conditions.

Ecotown consultant Dr. Antonio Carandang said the approach being taken by the municipality should help avoid the problems faced by other places that cater to large volumes of tourists.

“If carefully planned, Long Beach could be less commercial but more orderly and may surpass Boracay in terms of attracting high-end but environmentally aware tourists,”he said.

Mayor Alvarez insists they are not particularly intent on following Boracay’s development model, stating that it is more important for them to brand Long Beach as a unique destination that is world-class.

“Boracay is an already established world-class destination. We do not wish to compete but instead take the best practices and lessons learned from their tourism development methods. We hope we can create a destination that the Philippines can be proud of, always keeping in mind a holistic approach that balances community, development and the environment,”she said.

Accessibility: 3 to 4 hours land travel time from Puerto Princesa City; private van rentals from the city at P5,000 to 6,000 one-way