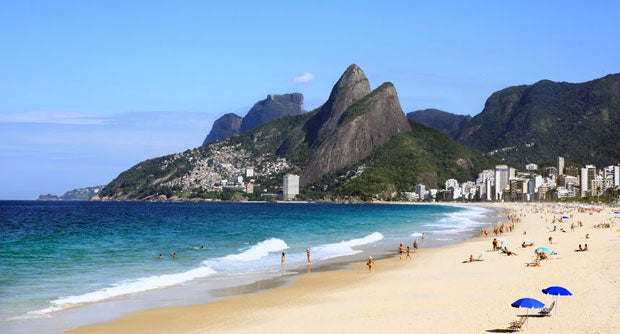 SAO PAULO — Calling all football lovers …and lovers. June 12, Brazil. Put it in your diary.

The date isn’t just the big kick-off as Brazil get the World Cup underway against Croatia; it’s also Lovers’ Day in the host nation.

The coincidence of dates heralds a boon for entrepreneurs plying their wares in Brazil’s expanding sex toy market.

Manufacturers see a host of opportunities on what they have already dubbed “green and yellow sex day” in honor of the national colors.

“We propose that on this day there is a lot of love and sex. Everyone will be glued to the TV watching the football and will rather forget about everything else.

Aguiar said 52 of her colleagues will next month kick off a campaign of their own to ensure that the football does not kick sex into touch but keeps passions running high — and sales of sex aids with them.

In Brazil, June 12 is the equivalent of Valentines Day, February 14, in other countries and this year the sex industry is intent on making it one to remember.

And Brazil’s health ministry will do its bid by overseeing the distribution of millions of condoms as part of an anti-AIDS campaign.

Wholesalers hope the fair will boost their coffers by some 10 million dollars as they offer consumers a kaleidoscope of products from the cheap and cheerful to the latest silicone vibrators.

Some of the latter are kitted out with mini cameras to send images to computer screens, fetching around $250 as technology is placed at lustful lovers’ disposal.

Businesses hope the World Cup does not prove a distraction and some whose livelihoods depend on amorous activities are taking steps to make the most of the event.

“Just as offices empty out when Brazil are playing, so the motels fill up,” he told AFP.

He reflects that four years ago, during the World Cup in South Africa, his establishment was a victim of its own success.

“Our motel staff didn’t get to see a single match in peace during the South African World Cup in 2010 as it was brimful of clients,” he reminisced.

It has come to the Fair to market an edible massage gel which tastes of ‘caipirinha,’ Brazil’s famed concoction of cachaca liquor, sugarcane and lime.

Naturally, the gel is colored green and yellow and is being marketed as “Hexa Brasil”, as the national soccer squad chase what would be a Hexacampeao or sixth World Cup title.

INTT are testing the market with a first batch of 20,000 units of the gel.

The Fair’s overall slogan meanwhile gives a nod to the football.

“Today is match day — and there will be a third half,” when lovers snuggle up for some post-play after the final whistle.

US fans buy most World Cup tickets outside Brazil