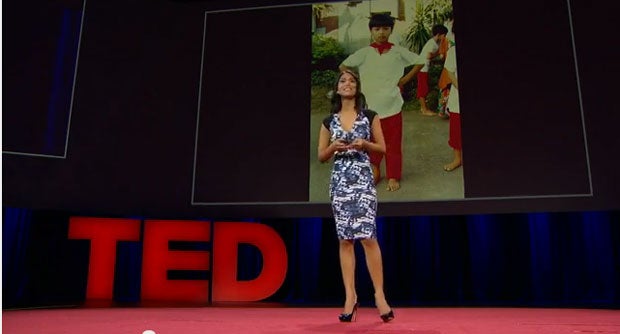 Filipino-American transgender Geena Rocero shows a picture of her as a little boy wearing a “Katipunero” attire. Screengrab from TED Talks Youtube account.

MANILA, Philippines – She used to wear a shirt on her head and pretend she had long hair as a boy in the Philippines. Now, the model in the United States is proud to tell the world she is a transgender.

Filipino-American model Geena Rocero came out as a transgender model during a prestigious TED Conference on March 31.

Clad in sleek dress and high heels, Rocero shared to the audience her experience growing up as a Filipino boy with a girl’s heart.

“I remember when I was eight years old in the Philippines I was walking around the house and I would always wear a t-shirt in my head,” Rocero said, as she showed the audience a picture of her as a little boy, wearing the distinct “Katipunero” attire.

At the age of 15, Rocero was approached by a gay beauty pageant manager who gave the transgender the first break.

“I won best in swim suit and best in long gown, and placed second runner-up among the 40 plus candidates. That moment changed my life,” Rocero said.

Rocero gave the audience a mental picture of her tropical country – she said she would attend beauty pageants staged at the back of the truck  next to a rice field, and that the event would be moved inside a house in case the rain pours.

It was in 2001 when her mother, who has moved to California, called her to say her green card to the US is ready.

Rocero at first resisted, she shared, noting that she is enjoying touring the Philippines as a pageant queen.

“Two weeks later, she called me and she said, ‘Did you know that if you moved to the US, you could change your name and gender marker?’” Rocero said.

“That was all I needed to hear,” she added.

She had her operation in Thailand when she was 19 years old, and moved to San Francisco, California in 2011.

Rocero recounted the time she received her driver’s license in California that classifies her as a female.

“Some people, their IDs were a license to drive or even to drink,” Rocero said.

“But for me, that was my license to live,” she added.

Rocero launched her petition “Gender Proud,” which, according to its website, “envisions a world where all transgender people are able to self-identify with the fewest possible barriers.”

She has also partnered with “All Out,” a global campaign that challenges anti-gay laws in different countries.

“Gender identity is in the core of our being. We’re all assigned a gender at birth, so what I’m trying to do is to have this conversation that sometimes, gender assignment doesn’t match, and there should be a space that would allow people to self-identify,” Rocero said.

The Filipino model then dared the audience to join her in her cause.

“I want to do my best to help others live their truth without shame and terror,” Rocero said.

“My deepest truth allowed me to accept who I am. Will you?” she added.