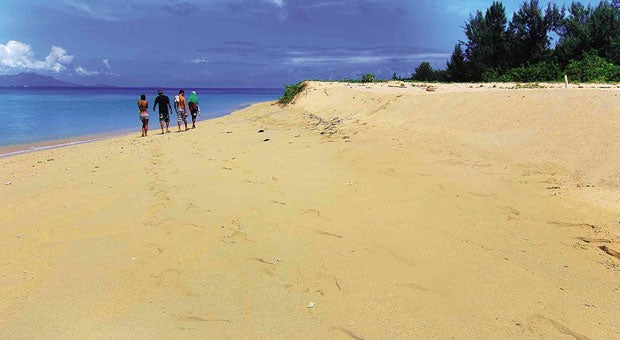 NAGA CITY, Philippines—Magical may not be the right word to describe the seven wonders surrounded by white sand scattered just off the coast of Mercedes town in Camarines Norte, but it sure comes close to it.

Located at the east of Camarines Norte, the Mercedes Group of Islands is a wonderland of white sand with a surprising abundance of pine trees and protected fish and coral sanctuaries, just a one-hour boat ride away from the mainland.

It is now being touted by locals and its municipal government as the next big attraction in Northern Bicol, Coleen Ibasco, Mercedes Tourism Officer, said.

The islands of Caringo, Canimog, Apuao Grande, Apuao Pequeña, Canton, Quinapaguian and Malasugui are offered as an adventure package that would include excursions to its white-sand beaches, mountain hiking and trekking, boating and kayaking and snorkeling, she added.

Although it has not yet attracted enough publicity, Mercedes’ seven-island paradise is a favorite of backpackers, campers and tourists who seek to experience a different travel adventure apart from beachcombing and indulging in extreme sports like kite-surfing that Camarines Norte has in store in Bagasbas Beach and Calaguas Island.

Ibasco said the Mercedes Tourism Office is working with other local government units (LGUs) in the Bicol region to promote the potentials of the Mercedes Group of Islands.

In Naga City, Alec Francis Santos, head of the Naga Arts Culture and Tourism Office, said united LGUs under Naga Excursions (Naga X) are planning on creating a tour package that would involve a trip to the Mercedes islands.

The main attractions of the Mercedes tour are the four largest islands of Caringo, Canimog, Apuao Grande and Apuao Pequeña, Ibasco said.

Only two of the islands, Caringo and Apuao Grande, are inhabited by residents.

Despite the rising influx of visitors, the LGUs and residents themselves were able to preserve the islands’ diverse ecosystem, lush mini forests and pine tree groves, Ibasco said.

If you take the route from Mercedes Port, your tour will start with Canimog Island. The route via Palms Farm Resort in Cayucyucan starts at Caringo.

Canimog, the largest among the seven islands, is shaped like a crocodile, thus, the nickname “Crocodile Island.” It has a bat sanctuary and a lush green forest of pine trees and fruit-bearing trees that are home to teeming wildlife.

On top of its highest peak is a lighthouse built in 1927 with a 104-step stone staircase leading to it from the white sand and pebble beach below. The lighthouse was operated by locals since June 26, 1927, until the early 90s, to guide fishermen entering the craggy Mercedes coastline.

It used to run on petrol but now operates on solar power.

On the opposite side of the island is a 500-meter white beach. No other manmade structure has been put up there except for the lighthouse.

In Caringo, some 288 households, or about 1,000 residents, maintain the pristine state of the white-sand beaches that surround the island, Caringo village captain Fernando Navales said.

It is the only other island where visitors can avail of homestay accommodations, apart from Apuao Grande, he said.

One of the women fish sanctuary guardians, Susan Aseron, won for herself and her group the second place in the Outstanding Rural Women of the Philippines competition held in 2012 for their work in keeping the sanctuary safe from illegal fishermen since 2007.

Aseron said she received as prize a fiberglass boat from the Philippine Commission on Women.

The women also make delicious jelly (gulaman) made from seaweeds they culture themselves, Navales said. Despite being a healthy delicacy, they do not sell it in the market or mass-produce it since it is purely for home consumption.

Ibasco said they plan to incorporate the making of gulaman from wild seaweed a part of the Mercedes islands experience in a culinary tour that they are developing with the women of neighboring island Apuao Grande.

The oldest house in Mercedes, built in 1920, is in Caringo. It is known as “Dakulang Harong,” or “big house,” and is owned by the heirs of Fortunato and Eufemia Ibasco.

The presence of a healthy marine ecosystem gives the seas around the Mercedes islands its turquoise and teal color that remains the same regardless of how deep the water is.

In Apuao Grande, home to more or less 1,000 residents, crabs, fish and livestock are sources of livelihood in the quiet cove that connects the island to Apuao Pequeña.

Pine trees line some 40 hectares of silky white-sand beaches on the part of the island away from the Pacific Ocean perfect for camping and bonfires.

In Apuao Pequeña, a mini-rain forest covers a mountain that is the refuge of fruit bats and wild boar. Pine trees provide cover to the entrance to the forest.

Ibasco said the fruit bats, which can grow to as tall as two feet from tip to tip of its wings, moved in from Canimog after residents began hunting them down.

An hour of hiking to the top of the mountain ends at a stone bench, right in the middle of the island.

The Canton Island is called “The Rock” because of its massive rock formations, caves and craggy shores.

Ibasco said it is a favorite of visitors who love spelunking and outdoor rock climbing.

Quinapaguian Island, on the other hand, is a tiny uninhabited island surrounded by white-sand beaches. It is also perfect for camping as well as swimming and hiking.

Malasugui is the smallest among the Mercedes Group of Islands and is situated at the middle of the six others. Most of the trees that grow on its flat surface are pine trees that end on its white-sand shores. From Malasugui, you can view the entire island cluster and the mainland of Mercedes.

Ibasco said they are planning to launch the complete tour package to the Mercedes islands at the end of April.

She added that they plan to make it a one-of-a-kind experience that would involve a culinary tour, with the tourists learning how to harvest and cook seaweed to make gulaman and other delicacies, along with the usual hiking, trekking, camping and swimming in the islands.

Navales said they are in the process of identifying houses in Caringo which could be used for homestay visits for those who want to stay the night.

The package is estimated to cost around P3,000-P3,500, to include boat rental and a tour guide’s fee for a one-day island hopping trip for a group of 10 .

With Naga City as the starting point, one can take a two-hour van ride or an 87-kilometer journey to Camarines Norte’s Daet before embarking on an 8.4-km journey by jeepney or car to Mercedes.

There are two points from where to start island-hopping: One is via the Mercedes Port and the other is from the beach at Palms Farm Resort in Cayucyucan, Mercedes. The journey to the island by boat can span from 45 minutes to an hour on both routes, depending on the roughness of the waves. Basco said the waves are rougher during the route via Mercedes Port because it is directly facing the Pacific Ocean.

Boat rentals can be arranged with the tourism office of Mercedes, travel agencies and tour operators accredited by the Department of Tourism Office in the Bicol region.

The Doña Mercedes motorized boat that is regularly used by the Tourism Office of Mercedes for tours can accommodate a maximum of 15 people.