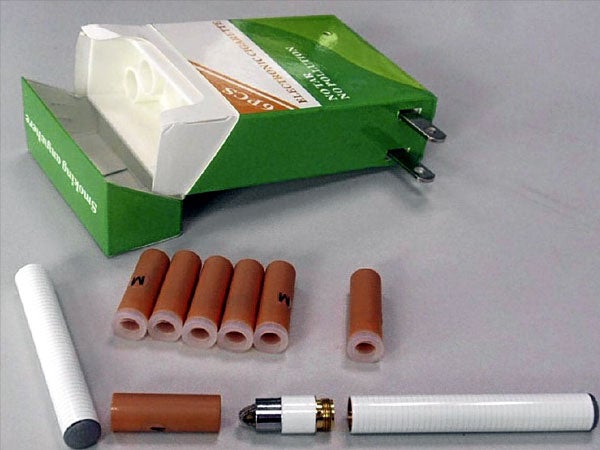 The joy of puffing: An electronic cigarette pack comes with a charger, flavor cartridges and other accessories. photo: diytrade.com

Spike in US poison calls from e-cigarettes

WASHINGTON – Accidents involving kids and bottles of flavored liquid nicotine for e-cigarettes have led to a spike in calls to US poison control centers in recent years, health authorities said Thursday.

The number of monthly calls went from one in September 2010 to 214 in February 2014, said the Centers for Disease Control and Prevention.

More than half of the calls involved children under age five who had swallowed, inhaled or spilled the liquid on their skin or in their eyes.

The most common concerns were vomiting, nausea and eye irritation.

One death was reported, involving a person who committed suicide by injecting the liquid.

“This report raises another red flag about e-cigarettes – the liquid nicotine used in e-cigarettes can be hazardous,” said CDC director Tom Frieden.

“Use of these products is skyrocketing and these poisonings will continue.”

The total number of calls to poison centers for e-cigarette exposures alone (those combined with any other exposure were not counted) was 2,405 from September 2010 to February 2014.

In comparison, there were 16,248 conventional cigarette exposure calls to poison centers in that period, mostly due to young children eating tobacco cigarettes.

Frieden said the nicotine liquids that are heated and inhaled through the battery powered device can be particularly dangerous because they are not required to be packaged in childproof containers.

“And they come in candy and fruit flavors that are appealing to children,” said Frieden.

E-cigarettes are not subject to the same regulations as conventional cigarettes, although the US Food and Drug administration is currently deciding what, if any, measures it might take.

There are also no restrictions on sale to minors, among whom use of the devices, often called vaping, is on the rise.

The CDC has reported that e-cigarette experimentation and recent use doubled among US middle and high school students during 2011-2012.

An estimated 1.78 million US students have tried e-cigarettes as of 2012.

“It is my belief that the liquid contents of e-cigarettes should be considered a toxic substance,” said Andrew Ting, assistant professor of pediatrics at the Icahn School of Medicine at Mount Sinai in New York.

“Accidental ingestion by children can be as dangerous as any medication in their parents’ medicine cabinet,” added Ting, who was not involved in the study.

“Liquid nicotine should be stored by adults the same way they store drain cleaner or Grandma’s blood pressure pills.”