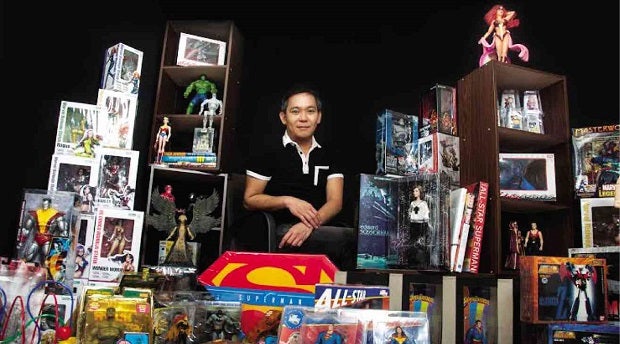 THE COLLECTION began in 2004 with an Incredible Hulk action figure. Now Tuxqs Rutaquio has over a hundred toys in his shelf, most of them in mint condition

‘I have over a hundred toys in my shelf, most of them in mint condition, never taken out of the boxes. Some are loose for display,” says Tuxqs Rutaquio.

The collection began in 2004 with an Incredible Hulk action figure.

“I didn’t know why I bought it in the first place, but I remember that it reminded me of my childhood and that I noticed how great the craftsmanship is on the details of the figure,” he explains. “At that time, the only things I collected were the comic books that I’d gathered since the 1980s, ‘Uncanny X-Men’ and ‘Mighty Avengers.’ I still have them in near mint condition.

The second piece for his collection was a no-brainer. “I never had a Voltes V toy as a child so that was the first hunt,” he recalls.

From there, Rutaquio expanded to other robots from ’70s and ’80s anime such as Daimos, Mazinger Z and Transformers.

He’s already transitioned to bishojo figurines. “It means ‘pretty girls’ in Japanese,” he notes. “I discovered and fell in love with the pieces of a toy line called Kotobukiya. Shunya Yamashita, a popular manga/anime illustrator famous for his Final Fantasy illustrations, had created Marvel and DC women characters for Kotobukiya in manga style.”

He says he has never seen characters like Wonder Woman, Bat Girl, Jean Grey/Phoenix or even Storm in manga style. “I was so fascinated. I got hooked because of their delicate aesthetics and detailed anatomy, showcasing the power and strength of women characters with a touch of sexuality.”

He usually gets two different design versions of a character. “I have two versions of Darth Vader, Galactus, Superman (All-Star, being a fan of the Grant Morrison revamp of the story), Batman, Flash Gordon, The Iron Giant, Edward Scissorhands and many more.”

All these characters, he says, “have a profound connection in my life … I buy toys that have a history for me, a sentimentality … When you see my collection, it’s a summation of who I am because I grew up within the fantasy worlds of robots and superheroes.”

It’s little wonder that he fits right in the world of theater. During his freshman year as a Fine Arts student at the University of the Philippines, Rutaquio was recruited by lighting designer Shakira Villa to help make props for Dulaang Unibersidad ng Pilipinas’ (DUP) “Ang Pagbabalik ng Madame.”

“I was hooked,” he says. “After that night, as much as I could, I joined every production of DUP. In my third year, I shifted to Theater Arts as a Technical Theater major focusing on Set and Costume Design, realizing that I could still apply what I’d learned in Fine Arts.”

He focused his energies into learning design, watching plays from other theater companies, specifically works by National Artist for Theater Design Salvador Bernal, who later on became one of his teachers in the masters classes offered by the Cultural Center of the Philippines.

He also dabbled in acting and had Anton Juan as a mentor, appearing in plays such as “Sakurahime,” “Drunkenness of Noah” and “Antigone.” He was cast in several of Chris Martinez’s plays such as “Last Full Show,” “Baclofen” and “Last Order sa Penguin.” He also did a turn in Madiraka Productions’ staging of “Temptation Island … Live!”, and was Ada in TP’s long-running hit musical “Zsazsa Zaturnnah Ze Muzikal,” which also showcased his singing voice.

His more recent acting include the titular role in DUP’s “Lulu” and last year’s “Der Kaufmann” by TP.

“I was a late bloomer as a director,” admits Rutaquio. “To prepare myself, I started as a stage manager in Jose Estrella’s all-women staging of ‘Waiting for Godot’ starring Eugene Domingo, Candy Pangilinan, Lanie Sumalinog, Dolly de Leon and Frances Makil-Ignacio.”

Nearing his last year as an undergraduate student, Rutaquio took up directing under Mabesa. His thesis production was Edward Albee’s “Who’s Afraid of Virginia Woolf?”

He credits directing for the Virgin Labfest (VL), the annual festival of new plays, for helping him hone his skills and find his directing voice. He’s done several of Layeta Bucoy’s plays for VL such as “Ellas Innocentes” and “Doc Resureccion: Gagamutin ang Bayan.”

After finishing his Masters in Theater Arts in UP, he did design work for Repertory Philippines, Atlantis Productions, Philippine Educational Theater Association and TP.

His involvement with TP mirrors his college experience, as he started out with design (set and costume designer for “Ang Pokpok ng Ohio”), then acting (in “Zsazsa Zaturnnah”) and assisting TP artistic director Nanding Josef in “Eyeball: New Visions of Philippine Theater.” Soon came an invitation to be TP’s associate artistic director.

“What I enjoy most about doing theater is that I can dabble in different aspects of production—not because I get bored easily but because I like learning more and more. It has become my panata to do  all these things in a year,” he says.

With TP now carrying out its annual summer theater workshops, Rutaquio is preparing for the company’s new season which will open a few months from now with Layeta Bucoy’s “Kleptomaniacs.”

“Being a great friend, Zsazsa creator Carlo Vergara agreed to have me produce this based on his design, he says. “I enjoyed the process with the Lodrigas. Every week or so, they would consistently send photos on the development of the sculpture. I admired how they took the time to carefully create the statue with love and passion! There are only three statues of this character made—my copy, one with Carlo, and the third with the Lodrigas.”

“When I have time, I plan to have it reproduced for distribution to those who want a copy. I would love to produce other characters from the graphic novel with the same team,” he adds.