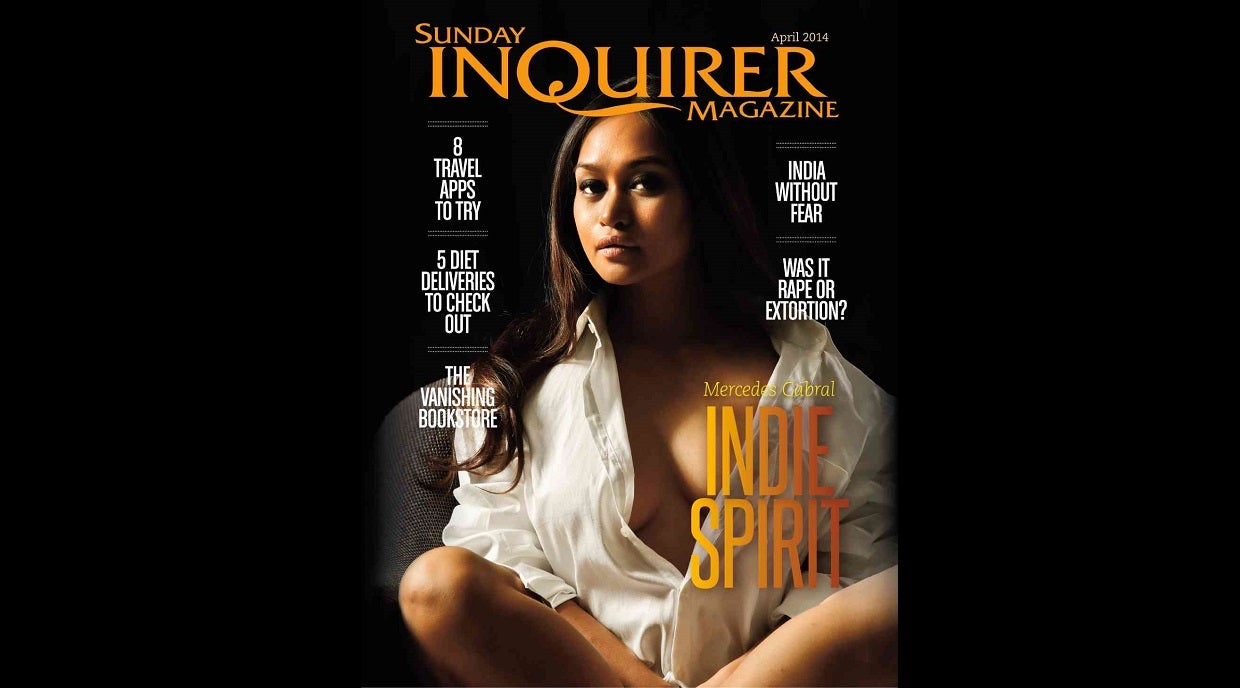 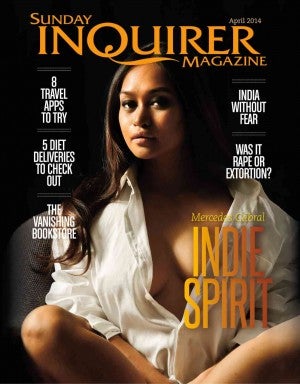 If I were a painter, that is the title I would choose for a nude portrait of Mercedes Cabral.

It is not just the dusky, sensual features, the full and lush figure that seems to revel in its own physicality, and the confident stance that says “I’m at home in my nakedness.”

One look into Cabral’s deep dark lustrous eyes and it is not hard to fathom why she has become Anna Karina to director Brillante Mendoza’s Jean-Luc Godard: part muse and part clay from which the auteur could mold his vision of The Eternal Female.

Barely six years since her groundbreaking (and controversial) debut in Mendoza’s critically-acclaimed “Serbis,” Cabral has become the go-to girl for independent filmmakers both Filipino and foreign.  She has racked up an impressive filmography that includes Mendoza’s “Kinatay” and “Thy Womb,” and acclaimed Korean director Park Chan-wook’s “Thirst.”

She has been feted at Cannes (where she was voted “the most beautiful” in a 2009 online poll) and lionized in Venice.

Last December her face loomed over New York City’s Times Square when British filmmaker Isaac Julien’s installation film “Playtime,” where she shared the bill with the likes of James Franco and Maggie Cheung, was shown on the electronic billboard on New Year’s Eve.

And yet, back home, all that people seem to want to know—even six years after the fact—is, did she do it for real with Coco Martin in “Serbis”?

Part of Cabral’s peculiar dilemma is the dual nature of her celebrity.

On one hand, she is seen as a serious actress willing to undertake the most challenging roles, even for the most measly-budgeted art house film, if she believes in the script and the director.

“It’s annoying,” admits the 27-year-old actress, of being stuck with the “bold star” tag even after having proven herself internationally.

“But I always tell myself that everything that happens, whether good or bad, happens for a reason.  I’ve learned to look for the positive side of even the negative things that happen to me.  It’s best to have a positive outlook, so your problems don’t eat you up.  First thing in the morning, I try to think of something positive, and it lifts my day.”

There is a lot to feel positive about.

In fact, when Sunday Inquirer Magazine (SIM) caught up with Cabral for our very first nude photo shoot, she had just returned from Denmark where she had completed principal cinematography for an upcoming Danish film for the august Nordisk Film studio, the oldest continuously-operating film studio in the world.

“Sobrang sarap (It was so good!),” is how she describes working with the Danish cast and film crew.  “These were some of the most intense actors I’ve worked with.  I learned a lot from them.  They knew that I’m not a formally-trained actor so they were very patient with me.”

She got the part upon the recommendation of Mendoza, who has been an exceptionally generous mentor in sharing Cabral’s talents with the world.

Clearly, after she took off her clothes for the photo shoot, Cabral was the most comfortable person in the room.  Draped only in an assortment of shawls, she was completely relaxed, which was more than I could say for the SIM staff hovering around her.

“Because I was a Fine Arts major, I have a healthy attitude about the human body and I’m open-minded about nudity,” she says.  “As long as it’s artistic and not smutty, okay lang.  When it comes to films, as long as the sex scenes serve the script, okay din.  After ‘Serbis,’ I turned down a lot of offers where it was clear the sex scenes were just there to entice the audience and titillate the viewer.”

The middle child of three siblings, Cabral describes her growing-up years as “normal”—she was neither a tomboy nor super-girlish, neither loud nor quiet.

One thing she always had was a penchant for drawing.  This led her to enroll in the UP College of Fine Arts as a sculpture major, following in the footsteps of her older brother.

After going to strict Catholic schools, the relatively loose and free-wheeling ways of art school proved an eye-opener for Cabral.

“I feel that my identity was really formed after I went to UP,” she says.  “I had fun in high school, but it didn’t really prepare me for real life, and I didn’t really know myself until college.”

In the bohemian atmosphere of art school, in the company of fellow artists and free-thinkers, Cabral felt she was at last ready to embrace life in all its fullness.

And then it all came crashing down.  On her second year in college, Cabral’s family had a reversal of fortune. She had to quit school and find work.

She managed to keep her connection to the art world by finding work as a nude model for muralist Alfred Galvez.  (In one installation piece she found herself covered in body paint and little else as part of the exhibit.)

She also started posing for pictorial spreads for men’s magazines. As her profile gained prominence, she met filmmaker Francis Villacorta, who encouraged her to audition for film roles.

“I didn’t have any acting experience, not even theater,” she recalls.  “I couldn’t really see myself acting, but he got me into an acting workshop, and I discovered that I like it.”

Eventually, she came to the attention of Brillante Mendoza, who was looking for an actress to play opposite Coco Martin in “Serbis,” a gritty slice of life in a sleazy, run-down movie theater.

Much to her surprise, Cabral got the part.

“I thought I wouldn’t pass the screen test because I didn’t really know anything about acting,” she recalls.  “It turned out that Direk Dante’s style was real-time acting, with a lot of improvisation.  He didn’t like ‘acting,’ he would give you a character and a situation and you reacted based on your character.”

What she may have lacked in acting experience Cabral more than made up for in screen presence, and in fact her very inexperience might have contributed to the freshness and directness of her performance in “Serbis.”

As it was, the graphic sex scenes she did for the film helped the word-of-mouth groundswell that eventually made it a hit, but real cinephiles recognized the debut of a major new talent.

The following year alone, Cabral appeared in 14 films.  True, most of these were no-budget independent projects, but still, her movie career was off and running.

After “Kinatay” and her international debut in “Thirst,” however, even the mainstream could no longer ignore Mercedes Cabral.

Today, Cabral has also become a much sought-after character actress in network telenovelas, bread-and-butter acting jobs that, frankly, pay the bills while she undertakes indie projects for love and not much else.

To her credit, Cabral remains ambivalent about being sucked in by “showbiz.”

“I started doing television two years ago, and that’s where I learned the difference between mainstream television and indie films,” she says.  “Before, I just acted the way I learned how, but acting for television is very technical.  You have to be conscious of every move, where the lights are, where the camera is.”

She’s had to adapt to the shifting nature of the telenovela, where characters can change from day to day, or even be killed off entirely, depending on audience ratings.

Television really caters to the mass audience, she says, and its makers seldom depart from the tried and true formulas for fear of losing audience ratings, because above everything else, it is a business.

She is also acutely aware of being something of a fish out of water in mainstream showbiz.

“They treat me a little differently because I’m not a Marian Rivera, or a Bea Alonzo, or an Anne Curtis,” she says.  “They never let me forget it.  I can’t really do anything about it except to fulfill my responsibility as an actor because that’s my work, and I love my work.”

Despite her increased profile in the business, Cabral says she still prefers to work on the passion projects of independent filmmakers who have vision and great stories to tell.

“I never really thought I’d end up in this industry,” she says.

In fact, she guesses, if she was not forced to drop out of art school, she would probably be a struggling sculptor now trying to break into the local art scene.  But sculpture’s loss has turned out to be our gain.

“Like I’ve said, things happen for a reason, that’s why I’ve learned to embrace everything.  Ang lahat ng bagay, may kapalit (There’s always a trade-off).” •