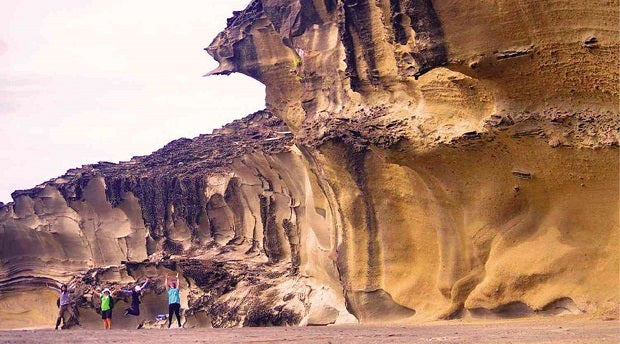 ROCK STAR Carved to perfection for thousands of years by crashing waves, whipping winds, fierce storms and tectonic movements, orchestrated no doubt by the Hand of God, rock formations of Biri Island in Northern Samar dwarf the visitors who can only stare at its stunning beauty. VICKY ARNAIZ/INQUIRER VISAYAS

BIRI, Northern Samar—From afar, the rocks resemble walls protecting this island-municipality from the ferocious waves of the Pacific Ocean and the San Bernardino Strait.

But up close, the unique Biri Island Rock Formation, composed of seven gigantic limestone rocks, reveals itself as an amazing natural wonder with perfectly carved forms that remind one of a towering tiger and honeycombs, among other shapes.

The rock formation has been described as a result of the “battle of the gods” since whipping winds, the movement from tectonic plates, fierce storms, the heat wave and huge waves crashing against the rocks created its magnificent beauty.

Adding to its natural attraction are the surrounding white-sand beach, a lush mangrove forest with dwarf mangroves and crystal-clear waters through which one can see live corals and a healthy sea-grass bed.

The only tourist destination in Eastern Visayas to make it to the list, Biri is located on the northwest tip of Northern Samar and has become home to many retirees, including foreigners like Canadian John Ryan.

Ryan and Filipino wife Glenda have set up a bed and breakfast business in response to the influx of tourists here.

The Canadian recalled how his wife first took him to her hometown about five years ago.

“It was love at first sight,” Ryan said of his initial encounter with Biri. “I decided to settle here after working as consultant for a top accounting firm,” he added.

“A laid-back lifestyle, wonderful people, and an island with awesome rock formations, blue seas and a rich marine life. How can you not love that? This is paradise,” Ryan said of his adopted land.

Biri is an hour’s boat ride over rough waves from the fish port in Lavezares town in Northern Samar.

In fact, Biri Mayor Antonio B. de los Reyes Jr. said he sculpted an image of the Nuestra Señora de Salvacion in 2005 to guide travelers across the choppy waves.

The all-white life-size sculpture has “a powerful solar light on its forehead to guide night travelers,” the mayor said. Installed 3 kilometers from the shoreline, the image is shown reaching out and saving a seaman from a sunken ship.

On this particular boat ride, everyone onboard grew quiet:  They could either be praying or holding their breath.

But the anxiety quickly disappeared as soon as tourists set sight on clear blue waters, the white-sand beach and the awesome rock formations.

As passengers step on the beach, they are greeted by habal-habal drivers offering their motorcycles for hire at P40 for three passengers.  For additional tourist guide services, be prepared to pay at least P300.

Locals advise visitors to check out the rock formations during low tide to avoid stepping on the corals, and on early mornings to have more time to explore the seven rock formations identified as Magasang, Magsapad, Macadlaw, Puhunan, Bel-at, Caranas and Pinanahawan.

Tourists wishing to view them can use the two entrances in Barangay Progress after paying P50 which is used to maintain the area and pay the watchmen.

Through one entrance, one can get a full view of the Magasang formations and Magsapad, which is believed to be the resting place of a goddess. Visitors are thus cautioned against making noises lest they incur her ire and provoke her into unleashing strong winds and gigantic waves.

Local legends also tell of a lovely woman named Berbinota who once ruled the place, a story probably inspired by the close resemblance of Magsapad’s left side to the silhouette of a beautiful woman with long flowing hair.  It is from this legendary woman that the town got its name, the old folk say.

The other entrance is about 8 km away on an elevated area, from where one can view all seven rock formations.

To get there, tourists can either ride a motorcyle, walk or jog, a popular option among the more active set.  To get to the summit, visitors have to cross a wooden bridge painted green to match the mangrove forests and coconut trees that abound in the area.

Midway, one can see the Macadlaw and Puhunan rock formations in the distance, both of them covered with lush vegetation.

As tourists descend the stairs after crossing the kilometer-long walkway, they are greeted with smaller rock formations resembling waves frozen in time.

Farther down is the Bel-at natural pool where guests can take a dip. After another 10 minutes’ walk, the breathtaking beauty of Bel-at and Caranas is revealed, with brown-orange boulders huge as a cathedral, their smooth edges and rugged lines seamlessly twined.

But there’s more to Biri than just its magnificent rock formations. Tourists can also go bird watching, camping, rock climbing and boating, as well as snorkeling, scuba diving or swimming in the clear waters.  The best surfing, however, is at the white beach in nearby MacArthur village.

Biri is a fifth class municipality, with a yearly income of P15 million to P25 million.

Best time to go:  April to June, when waters are calmer

How to get there:

Travel six hours by land from Tacloban City to Allen, Northern Samar, then from Allen to Lavezares (20 minutes via jeepney). From Lavezares, take a pumpboat to Biri (one hour)

If coming from Manila, take a 15-hour bus ride to Matnog, Sorsogon, then a ferry to Allen town, then Lavezares.

Or take a plane to Catarman, Northern Samar, which is just 20 minutes away to Lavezares.

From the Bicol region, take a three-hour boat ride from Sorsogon to Biri.

For tourists from Cebu City, take a passenger vessel to Calbayog City, Samar, which is about three hours away by land to Lavezares.

Use appropriate footwear like aqua shoes and nonskid shoes

Bring an extra bottle of water

Bring a camera with extra battery

Ziploc your camera and cell phones

Search is on for new PH tourism sites