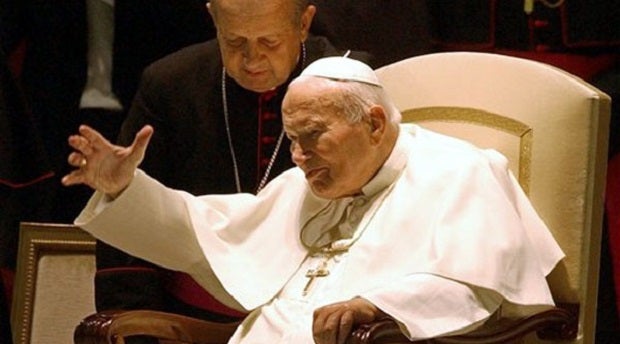 Pope John Paul II with Archbishop Stanislaw Dziwisz as he arrives in the Paul VI hall to hear a “Message from the College of Cardinals to the Holy Father” at the Vatican. AP FILE PHOTO

Writing to John Paul II: ‘Like talking to God’ in shopping mall

Kneeling in a pew flanked by relics and memorabilia of the late Pope John Paul II, a young mother scribbled a prayer on a small envelope, pleading that her child grow up to be smart and be accepted by its estranged father.

Christina Bisana, 28, had been praying for this for years and when she saw the relics of the soon-to-be-canonized Pontiff displayed in the middle of a bustling shopping mall in Quezon City on Thursday, she felt a fresh surge of hope that her prayers would finally be heard.

“That’s our Pope. It’s like talking to God himself,” Bisana, a single mother, told the Inquirer.

She was just passing by Gateway Mall at Araneta Center on her way to Makati City on an errand when she saw the exhibit, part of the two-month “Totus Tuus” tour of the relics in the Philippines.

The 50-piece exhibit included Pope John Paul II’s blood stain and hair strands, his skullcap, a cassock, a purificator, a piece of a chasuble that he used, a rosary and a strip of the sheet from his deathbed.

Some of the relics came from Rome and some from Poland. The others were borrowed from the personal collections of nuns, priests and lay people who met the Polish-born Pope during his two visits to the Philippines.

Born Karol Wojtyla, Pope John Paul II reigned from 1978 to 2005. He first visited the Philippines in February 1985 during which time he beatified the first Filipino Church martyr, Lorenzo Ruiz, along with 15 other Christian martyrs.

John Paul stayed six days in the country, visiting and celebrating Masses in Manila and the cities of Baguio, Cebu and Davao.

He visited the Philippines a second time in January 1995 for the World Youth Day in Manila. More than 4 million Filipino Catholics attended the closing Mass of the celebration at Rizal Park, making it one of the largest-crowd papal events in history.

According to the organizers, all of the relics and other items in the exhibit have been authenticated and recognized by Church pastors, especially by the Archbishop of Krakow, Stanislaw Dziwisz, the former secretary and trusted aide of John Paul.

Bisana said being there to write down her prayer was like talking personally about it to John Paul, who will be canonized at the Vatican on April 27.

She did not know that the prayer intention that she had put in the wooden drop box, along with thousands more from others who had gone to the exhibit, would get closer to the late Pope.

The letters pleading for miracles and seeking physical and spiritual redemption will be recorded in a book and placed in John Paul’s tomb in Rome after the tour, which will end on June 1, according to tour chair Dave de la Cruz.

The Totus Tuus tour will have 11 stopovers, including churches, schools and shopping malls in Metro Manila and Davao, Batangas and Capiz provinces.

In the Gateway exhibit, at least 12 of John Paul’s relics are on display for public veneration until April 24. After that, the relics will be transferred to a parish named after him in Eastwood, Quezon City.

On the first day of the exhibit on Thursday, the relics captivated hundreds of John Paul’s Filipino admirers, including the likes of Bisana who had no idea that the shopping mall had a special visitor.

Shoppers and passersby took out their mobile phones and digital cameras to snap photos of the relics. Some took time to examine the relics, most of which were placed in glass boxes. Children who were not even born yet at the time of John Paul’s death in 2005 curiously eyed the relics, as if wondering what the fuss was all about.

Others slid into the pews to pray and many wrote down prayer intentions and placed them in envelopes with money as donations.

“I offered a prayer for the healing of my sick father and for the fast processing of a job waiting for me abroad,” said Harry Farre, 34, who was on his way to work at a restaurant in Makati City.

Farre said his father was struggling with a lung disease and he was applying for a job as a cook in Jeddah, Saudi Arabia.

He said he hoped his prayers would be answered through the intercession of Pope John Paul II.

Marvie Magsumbong, 39, said she prayed for good health for all the members of her family. “I also prayed for world peace,” she added.

Larne Gayatgay, a teacher, came to the exhibit with six of her nephews and nieces. “We came here to see the display,” said Gayatgay, who had learned about the exhibit on Church-run Radio Veritas.

She said she brought along her nephews and nieces, aged 9 to 15, for them to get acquainted with John Paul, who died when they were still too small to remember.

Gayatgay, who was involved in the World Youth Day preparations nearly two decades ago, whispered a prayer to the Pope before leaving the exhibit, asking that God keep her siblings safe and give them good health.

The first three days of the tour, which began at the Radio Veritas chapel in Quezon City, drew more than 3,000 prayer intentions from people seeking deliverance from sickness and financial and other problems. More will come in the next two months, De la Cruz said.

“People are really engaged in their faith, trusting in God’s providence and love, which becomes stronger and more relevant through the intercession of Pope John Paul II,” he said.

De la Cruz said the drop box brimming with prayer intentions was an indication that many felt there was a friend or a father listening in heaven and relaying their pleas to God.

“This is one reason why he will be canonized very fast because many people experience his presence,” he said.

John Paul II’s canonization will take place less than three years after he was beatified on May 1, 2011.

De la Cruz said his office decided to open the exposition and veneration of the Pope’s relics to the public to deepen the Filipinos’ love and devotion to the newest saint.

The exhibit had been originally planned as a private occasion for thanksgiving for the beatification of Ivan Merz, he said.

“We want to thank God for the gift of a new saint and we hope that through this tour, the people will have a deeper relationship with God, inspired by the life and works of Pope John Paul II,” he said. Inquirer Archives