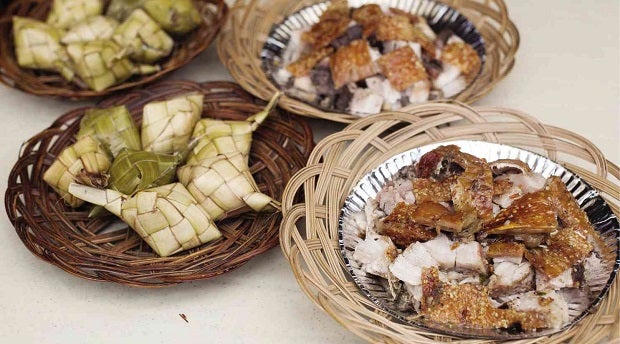 Good ideas can emerge from a garage. Think of the first Apple computer. And then there is The Chocolate Chamber (TCC) in Cebu City, which has moved from its humble origins into a new, café society-type of location.

The first thing we noticed were the shawls slung on each chair to keep the customers warm, because chocolates need cold temperature. That observation was confirmed by Edu Pantino, a business partner of the Choa family.

Pantino gave us the lowdown on chocolates, having had his training with the Mars company, which conducts seminars in Davao. It is Racquel Choa who transforms the tablea (choco discs) into many forms, with the help of her children who serve and help cook some items in the menu. Husband Alfred, meanwhile, customizes the machinery needed for their chocolate business.

At TCC, you can choose your chocolate flavor (try the hibiscus, we were told, or why not the salty caramel) and pick your cup. A party can end up with mix-and-match cups and everyone’s choice of cakes, pastries and truffles.

A high-tea atmosphere applies to this chocolate place; the tea tray, named “chocolate haiku,” contains scones with marmalade, a salad with chocolate nibs (roasted dried cacao beans) and pastry. You expect a tsokolatera (pot), and it appears containing tsokolate-e (espresso).

And, would you believe, there’s a vegan chocolate cake that has no eggs or butter but contains olive oil.

This place is for a chocolate junkie who will appreciate breads and pizza dough infused with cacao, the latter a perfect foil for the toppings of salty cold cuts and olives.

Also in Cebu, you can still get your choice of ngohiong (also ngo yong)—a favorite breakfast, merienda, lunch, dinner or midnight snack—in the garage of a house.

We were at Doming’s, a place with no trimmings, where you wrote down your orders on a piece of paper and one woman took charge of serving the food and cleaning up the plastic tables when she had the time.

Ngohiong is a lumpia (spring roll) version with its filling of ubod (coconut pith), though some say it can contain singkamas (jicama) or bamboo shoots. The flavoring is five-spice powder, and the texture is really in the fried wrapper that apparently has breadcrumbs bound together by eggs.

When our order came, the ngohiong pieces were on a plastic plate with puso, the wrapped rice, with the sauce and container.

Cebu guide and journalist Jude Bacalso believes the flavor Cebuanos look for is really in the sauce, a mix of soy and vinegar. Which is apparently found in the garage-turned-restaurant that is Doming’s, judging from the number of people who dined that day.

I suppose that particular flavor is what Cebuanos grew up with, and they associate it with having a ngohiong sortie with the barkada (gangmates) and family.

A tip from my friend, Maricris Encarnacion, who resides in the area: Go early because sometimes, by 10 a.m., the ngohiong runs out.

Tatang’s Extra Crispy Boneless Lechon is not really in a garage but located near one. It does feel like being in a garage, with plastic tables and chairs under what looks like a makeshift roof.

At Tatang’s, lechon is served with just the pig’s midsection—without the head, feet and bones, and rolled around a stuffing of chopped aromatics (such as lemongrass), with some chili for the hot version.

The skin ends up blistered, which makes it look more like lechon kawali. But it’s really roasted on charcoal, the rolled pork speared into a rotisserie. If you want really crispy lechon skin, this should be it.

Tatang’s boneless lechon is not exactly original since other cooks have been doing this. Lorenz Florendo, the owner, once saw a long line of people at one booth of a food fair, and discovered that it led to boneless lechon.

He made his own and now serves orders with puso (Cebuano hanging rice), with a choice of vinegar dip.

Diners can use plastic gloves to keep their hands grease-free. That’s more upscale than the ordinary plastic bags I’ve seen customers use at the old Larsian barbecue stalls and at the Carbon market.

Feria, on the other hand, is not anyone’s garage, but the buffet restaurant of Radisson Blu Hotel Cebu. You can go there at any time of the day. As with all buffets, when there are too many choices, it becomes difficult to decide where to start.

Our party of eight all had different suggestions. Roast duck, said one, with a Chinese chef who will personally attend to you and answer your questions (that’s what interactive buffet means). The salads, said another, especially the roasted pineapple.

Have the Chinese soup, for which the noodle is handmade, but be careful not to use too much of the good chili sauce. Or try the Italian section, because the food and beverage manager is Italian, Marco Amarone from Napoli, who is worried like I am that our local chefs aren’t learning how to do Filipino food.

Japanese cuisine has its own separate section. But everyone recommended the bread pudding, which was superbly done. I had it for two straight days.

All of that food-tripping was done in one day during my Cebu City sojourn. There will be more discoveries from expatriates who have made Cebu their home—two Malaysians, an Aussie and a French from Provence—plus tours of a Jesuit House within a warehouse, and the showroom of furniture designer Kenneth Cobonpue.