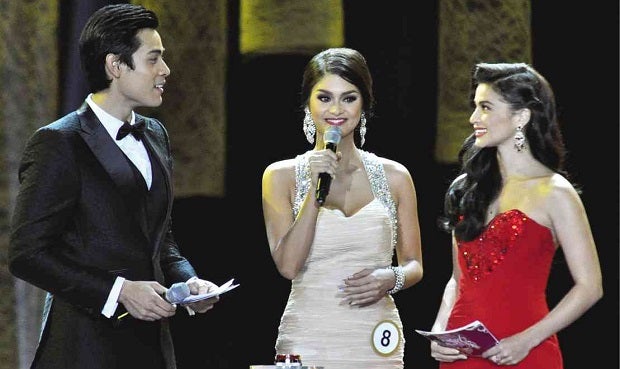 THE CRUCIAL Q&A portion, with hosts Xian Lim and Anne Curtis, that could have ruined Pia Wurtzbach’s second attempt to finally win a Binibining Pilipinas crown. PHOTO BY RICHARD REYES

Pia Wurtzbach recounts her ‘hagulgol’ backstage after the pageant

After losing in the  Binibining Pilipinas pageant last Sunday, Pia Wurtzbach has now become the best person to follow her own advice. In an exclusive phone interview with Inquirer Lifestyle, Wurtzbach, 24, an ABS-CBN talent, admitted that she was still hurting two days after the setback.

“But thanks to my family, I’m feeling much better now,” she said, referring to her mother and aunt, who flew all the way from London and Iligan, respectively, to watch her compete.

She’s not blaming anyone, including Sen. Sonny Angara, who many believed was responsible for Wurtzbach’s loss for asking her to answer in Filipino during the pageant’s much-awaited question-and-answer portion.

Nearly half of the members of this year’s panel of judges, led by reigning Miss Universe Gabriela Isler, were foreigners. The Q&A  makes up a mere 10 percent of Binibining Pilipinas’ overall judging, but it’s crucial in a tight contest.

“I’m happy with my answer and I’m proud that I chose Tagalog over English to express it,” Wurtzbach said. “Tumatak ang sagot ko sa isip ng masa. I was able to connect with a lot of people by answering in Tagalog.”

Despite not being able to fully translate her answer in English within the allotted 30 seconds, she was confident that Angara and members of Binibining Pilipinas Charities, Inc. (BPCI) were able to explain her answer to the other judges during their deliberation.

As first runner-up to Ariella Arida and company during last year’s Binibining Pilipinas, Wurtzbach was one of the most prepared candidates this year. Spontaneous and eloquent, she could have answered any question in English and perhaps even in Cebuano (her mother is originally from Cagayan de Oro) with ease. What happened?

“It was the judges’ decision, and I respect them for it,” she said. “It doesn’t mean that just because you didn’t win, you’re not beautiful or worthy of the crown. I knew the moment I joined a beauty contest that it was a gamble. Since it’s subjective, the results could turn either way, based on the judges’ overall impression.”

Wurtzbach considers herself her “own worst critic.” Barely had her tears dried when she decided to watch and dissect a video of her performance on coronation night. She saw nothing that she should have changed.

“I rehearsed everything, from my entrance to the way I walked and posed,” she said. “My performance was so different from last year. This time I was fiercer. The only thing I didn’t rehearse was the Q&A. Since I felt it was one of my best suits, I didn’t think of answering possible questions judges might ask during the finals.”

During one of many pre-pageant interviews she granted a few weeks back, Wurtzbach was asked by a journalist what her advice was to newbie contestants. She said that they shouldn’t consider joining pageants the “be-all and end-all” of their existence. Win or lose, it’s just a phase in their young lives.

Wurtzbach also encouraged her fellow candidates to think and cultivate their other strengths. They should ask themselves what other areas they’re good at.

Apart from joining show biz in her teens, Wurtzbach also trained as a chef for a year in 2009. She soon became the family’s breadwinner, when her Filipino mother and German father separated when she was 11.

The actress could resume her show-biz career, dabble in commercial modeling and even go corporate. Since she loves to cook, a full-time career in the culinary arts isn’t farfetched.

“If there’s anyone who should be a good role model when it comes to losing with grace and moving on, that person should be me,” she said. “Who would have thought that I’d be following my own advice?”

The best of luck

Wurtzbach could laugh about it now. But it was a different story in the wee hours of Monday backstage of the Smart Araneta Coliseum soon after she lost.

According to inside sources, in a three-way tie were Wurtzbach, Parul Shah and Kris Tiffany Hanson for fifth place. Judges reportedly deliberated and broke the tie in favor of Shah and Hanson.

If true, it would have made Wurtzbach first runner-up again. Instead, runner-up honors went to Laura Lehmann and Hannah Ruth Sison.

The 5’8” beauty was still smiling onstage even after it became apparent that she was out of the winners’ circle. It wasn’t the actress in her at work, she declared. “I wasn’t playacting. Everything happened so fast, there wasn’t even time for me to feel hurt. I felt numb.”

But it was a different story backstage. Gidget dela Cuesta, Wurtzbach’s handler in ABS-CBN, hugged her and immediately brought her to the dressing room.

The dam broke as soon as she saw herself in the mirror. Instead of feeling comforted with every hug and word of sympathy that came her way, Wurtzbach felt more hurt. It was, she understood later, a realization that all the hard work she had put in all these months had been in vain.

Wurtzbach isn’t closing her doors to joining beauty pageants again. But she has yet to decide if it will be Binibining Pilipinas or another local pageant.

“It still hurts,” she said. “I still need to sit down and carefully think about it. But once I make a decision, I will give it my 100 percent.”