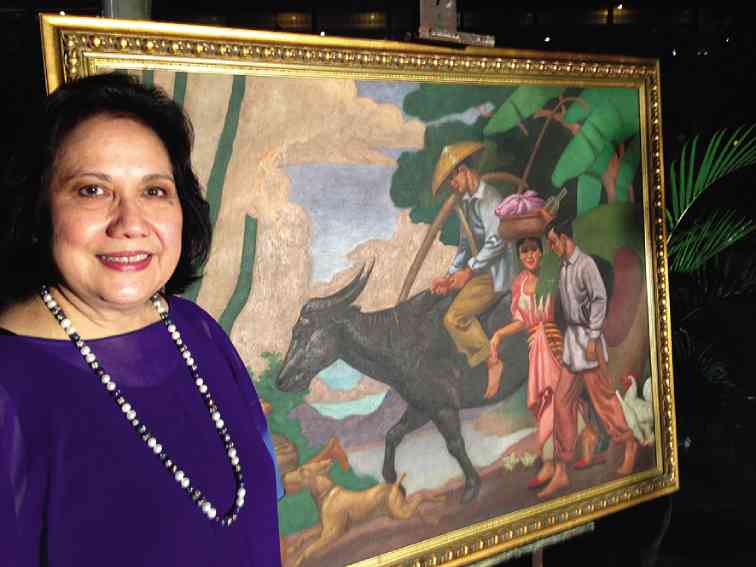 ANGELES CITY—Josefina Henson has scant memories about her father, artist Vicente Alvarez Dizon. She was only 5 years old when Dizon died of tuberculosis in 1947 at the age of 42.

But Henson, now 71, shared her discoveries about her father’s legacy through a book that compiles the narratives of his contemporaries and disciples.

Her book “After the Day’s Toil” is a “timely reminder to this generation about the work of an excellent and pioneering artist who brought honor to his country and people, and who contributed greatly to the formation of generations of artists, myself included, at the College of Fine Arts of the (University of the Philippines),” wrote Benedicto “BenCab” Cabrera, National Artist for Visual Arts, in the book’s foreword.

The book’s publication was an attempt to “rescue the legacy of a life so unjustly cut down [by illness] at the height of its powers,” according to the book’s editors Juliet C. Mallari and Alex M. Dacanay.

At the book launch  in Holy Angel University (HAU) on Tuesday, HAU president Arlyn Villanueva described the 130-page book as a “loving tribute” by a daughter, who needed to pluck Dizon out of obscurity.

Henson as well as her elder brother, Daniel, are both painters, who championed their father’s ideas through decades of craft and research.

Dizon carved a golden moment for Philippine art when he placed the country at the top of the world’s biggest art competition in 1939. He won the top prize in the Golden Gate International Exposition, which opened on Feb. 19, 1939 in San Francisco, California.

His painting “After the Day’s Toil” adjudged the best among the works of 77 artists, including that of Spanish surrealist painter Salvador Dali.

The masterpiece, Henson said, was Dizon’s graduation thesis at Yale University where he obtained a bachelor’s degree in fine arts in June 1936. He finished it with distinction in less than two years.

Kevin Mallen, a representative of the International Business Machines  in the Philippines, bought the painting and entered it in the contest.

Dizon described his piece this way: “The painting depicts a group of Filipino peasants homeward bound after their toil in the sugar cane fields. They look happy and cheerful and all seem contented in life. All the faces in the picture, including the animals, have varied expressions of gaiety. Even the surrounding landscape has a very cheerful and inviting aspect.”

After explaining techniques like perspective and contrast, Dizon said: “[The] picture also wants to revel in the first place that no matter poor they are, Filipinos dress decently like all civilized peoples of the world; secondly, that the Philippines is rich in natural beauty and worthy of the love and respect not only of her own people but those of other lands; thirdly, that the Filipinos are the only Christian people in the orient, as symbolized by the church in the background; and lastly, that the Filipinos are a happy and peace-loving people as symbolized by the placid river.”

Acquired by a Filipino

Dr. Rogelio Pine, a Filipino cardiologist based in New Jersey, acquired the original painting at the invitation of the Daniel B. Grossman Fine Art Inc. in New York on Oct. 3, 1980.

“Mr. Grossman allowed me to pay in installments, at $1,000 a month, in three years,” Pine told the Inquirer after the launch.

“The painting came to us; we did not seek it,” he said, adding that he established an immediate connection with the painting because it portrayed his humble beginnings in Batangas.

It took Pine 30 years to find Dizon who had been searching for the original masterpiece to fulfill a wish of his mother, Ma. Ines Lutgarda. Pine and Dizon finally met in 2008. An unfinished copy of the original painting and the studies made for it are in Dizon’s possession.

Virginia Flor Agbayani, former associate dean of the UP College of Fine Art, wrote of Dizon’s dream of instituting an arts education at the state university.

The maestro, she recalled, went around public schools doing “chalk talk,” a reference to Dizon’s practice of drawing a line which he eventually used to shape images, to teach arts to young children.

“Maestro Dizon’s vision for Philippine art and the future of Philippine artists was not an elitist undertaking; art should be a source of education and enlightenment open to all, from the elementary grades all the way to the post-graduate levels,” Agbayani said.

She said Dizon “spent the meager energy left to him during his remaining years revising the arts education courses at UP.”

Fernando Amorsolo, the painter’s contemporary, chose Dominador Castañeda, who worked with Dizon, to replace him as director of the [now defunct] School of Fine Arts, Agbayani said.

Agbayani said the curriculum made by Dizon and Castañeda “became the basis of the general education course of the future UP school of fine arts in its transition to gaining status as a college.”

Aside from pioneering finger painting in the country as well as doing research and sketches on Filipino costumes, Dizon also advocated for a museum that would be a permanent treasure house of Philippine art works, according to the late artist Galo Ocampo.

Henson said her father also made a visual diary consisting of 39 paintings of life while they were on the run in Pampanga during World War II.

She is preparing to exhibit these works, possibly in time for her father’s 110th birth anniversary in 2015.

“In the end, his love of country overwhelmed even his passion for art,” Henson said. “He believed that hard work, perseverance, family values and love would bring a glowing sense of satisfaction and well-being after the day’s toil.”