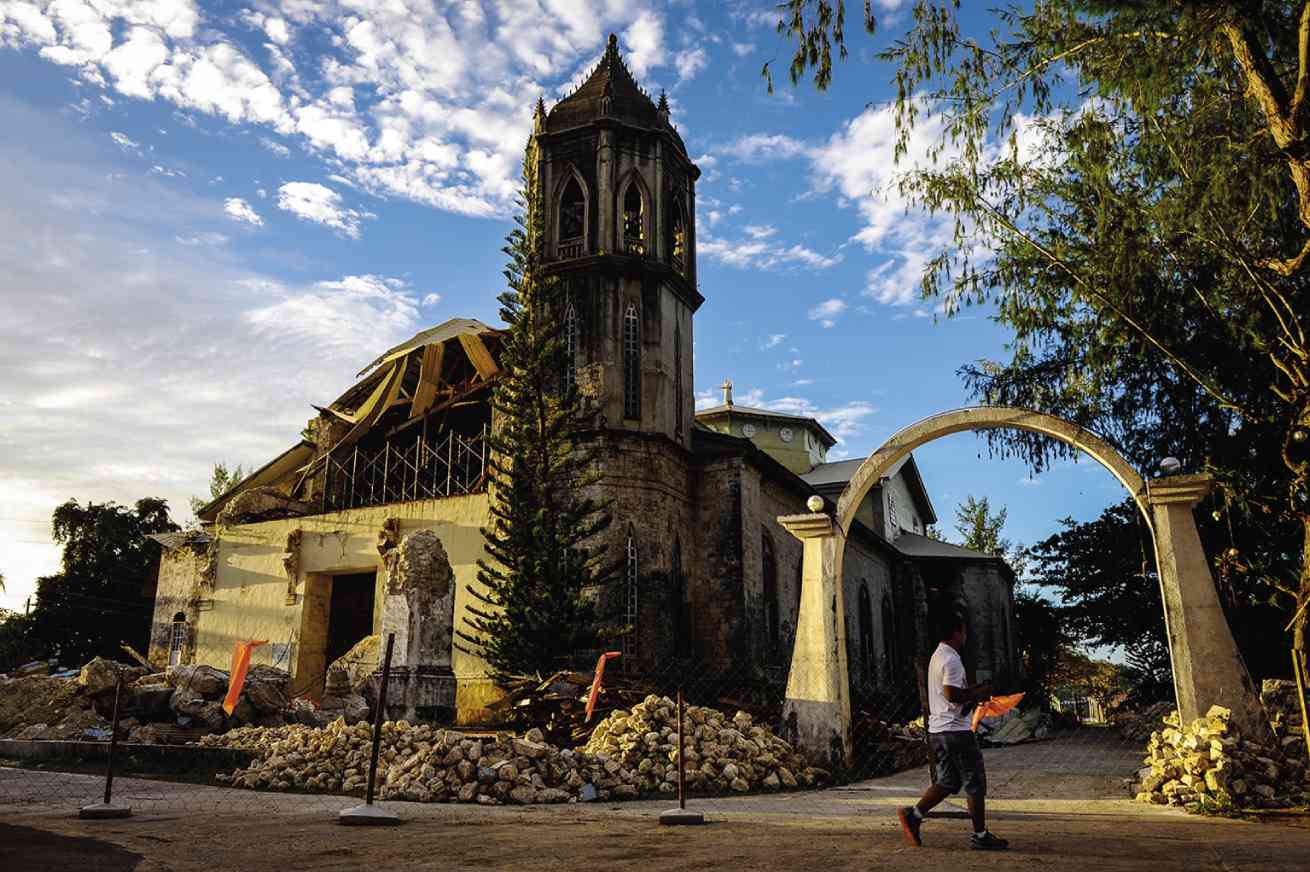 CHURCH of Our Lady of the Assumption in Dauis

Reconstruction of ancient churches and other heritage structures in Bohol destroyed or damaged by the earthquake last year can start only by yearend.

National Museum  director Jeremy Barns has announced that before the end of 2014, construction contracts will have been bidded out for the restoration and reconstruction of the damaged structures.

In the meantime, painstaking studies are being made to determine the proper reconstruction and conservation approaches to be made.

The Bohol Hertiage Task Force has also set up a system for the prevention of illicit traffic of cultural properties.

Although there has no finding yet of pilferage. cultural properties must be registered with the National Museum. In damaged heritage churches, items that are usually pilfered are  the antique icons and chalices and other exquisite items used in the Eucharistic celebration.

A team from the National Museum and students from the University of Santo Tomas Graduate School Cultural Heritage Studies program recently visited Bohol to reassess the heritage structures affected by the 7.2 magnitude earthquake that struck the Visayas October.

“We were assigned by our Archaeology professor to assess Loon and Loboc churches and discuss the site formation process that occurred in both,” said team member Billy Malacura, a native of Loon and UST Cultural Heritage Studies student.

The group was assigned to inspect the churches of Loon and Loboc. It was also able to check other structures that have been named National Cultural Treasure (NCT), Important Cultural Property (ICP) and National Historical Landmark (NHL) in other Bohol towns—Loay, Alburquerque, Baclayon, Maribojoc, Cortes and Dauis.

Shortly after the quake, different cultural agencies set up the Bohol Heritage Task Force (BHTF) to establish the extent and severity of the damage on Bohol’s heritage structures, identify properties that immediately needed to be secured, draw up priorities for restoration, estimate the amount of human and financial resources necessary, and establish important linkages with stakeholders.

The task force has its office at the National Museum Bohol branch in Tagbilaran City.

“Currently, the National Museum is on the recovery operation,” said Charlemeine R. Tantingco, National Museum Bohol branch manager/officer in charge and Bohol Heritage Task Force coordinator. “We are recovering stone blocks which could be used for further restoration of those churches if possible. We also recover church items and ecclesiastical collections,”

“It is one of our plans to have at least one container van for storage every site but as of now, we only construct temporary storage facilities. We’re just waiting for funds,” he added.

The provincial capitol building, an ICP, is also assigned to National Museum. Meanwhile, the National Historical Commission of the Philippines (NHCP) handles the churches of Baclayon, Loay and Dauis.

In a late January briefing at the National Art Gallery of the National Museum in Manila, a team of engineers reported their assessment of the conditions of these churches and classified their level of restorability.

Identified as restorable with minor renovation on structural and architectural damage are the churches of Dimiao (NCT) and Panglao (ICP).

The church of Baclayon (NCT, NHL) is assessed as restorable with minor to major structural and architectural restoration.

Churches that are considered non-restorable are Maribojoc (NHL, NCT) and Loon (NHL, NCT).

The engineering team, led by Jeff Garcia, also reported that except for Maribojoc and Loon,  the portico façades of the damaged churches were not in the original structures.

The front portions of the churches of Loboc, Loay, Baclayon, Cortes and Dauis which were all damaged, were added at a later time, the team reported.

The earthquake exposed the original façades, including their interesting details.

Garcia echoed the basic principle of conservation during the presentation which is to “respect the original.”

Loon is the worst hit town in terms of built heritage. It did not only lose its NCT church but three other declared NCT structures.

The Spanish-era octagonal mortuary chapel located across the church is in ruins while the 212-step grand stone stairway called Inang-angan, which connects the old and the new settlement in Loon, was also damaged.

In the neighboring town of Maribojoc, the only perfect isosceles triangle tower in the country, the Punta Cruz watchtower also suffered some damages—especially on its upper portion.

Its location is now around 100 meters away from the shoreline due to the tectonic uplift caused by the earthquake.

The town’s church is also in ruins but stone blocks and other movable and immovable cultural properties were systematically set aside.

The church artifacts that had been retrieved are now stored in temporary storage facilities set up by the National Museum.

The agency has also set temporary conservation laboratories for the preservation and protection of recovered artifacts.

This church was assessed as “restorable.”

The BHTF has also undertaken geological assessment of the affected structures as well as set up a system for the prevention of illicit traffic of cultural properties.

Garcia’s team has presented a plan for the rehabilitation of the damaged structures.

Recommendations include shoring up of  damaged walls, tagging and scanning of façade and interior leaf, material testing, and “asbuilting” and data modelling.

Asbuilting, or “as-building,” according to director  Eric B. Zerrudo of the UST Graduate School-Center for Conservation of Cultural property and Environment in the Tropics, is a form of documentation. “It is the act of measuring the building in situ,” he said.

Zerrudo has suggested that each site should have an update board so that locals and tourists alike are informed about the developments on the restoration, reconstruction, or redevelopment.

A photo exhibit about Bohol’s damaged structures is going to be mounted in July at the National Museum Bohol branch in Tagbilaran City, in time for the annual Sandugo Festival.

The exhibit will feature artifacts recovered from the heritage and historic structures.