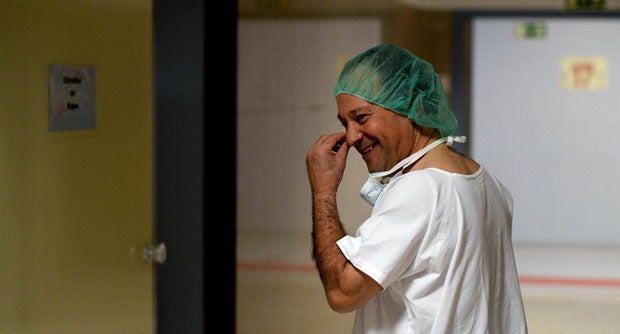 TO GO WITH AFP STORY BY LEVI FERNANDES - Doctor Jose Carlos Noronha smiles as he leaves the operating room after performing a surgery at the Trindade hospital in Porto on March 24, 2014. Renowned as the "Ronaldo of knees", pioneering Portuguese surgeon Jose Carlos Noronha is saving the careers of top world football players who feel the dreaded, career-threatening crack of a torn ligament. AFP

PORTO — Renowned as the “Ronaldo of knees”, pioneering Portuguese surgeon Jose Carlos Noronha is saving the careers of top world football players who feel the dreaded, career-threatening crack of a torn ligament.

A tear of the anterior cruciate ligament, one of the main stabilizers at the center of the knee joint, is a potential career killer and one of the most feared injuries among footballers.

But Noronha was credited in the world’s sporting press with performing a “miracle cure” when he operated on Real Madrid’s Pepe in December 2009 and the Portuguese international recovered in time for the 2010 World Cup.

Now Colombian international Radamel Falcao is hoping for a similar reprieve after going under Noronha’s knife for the same injury on January 22 this year, less than five months before the opening of the World Cup in Brazil.

Noronha is one of the world’s foremost practitioners of a new “keyhole” surgical repair, which allows players to get back to fitness — and the pitch — more quickly.

He does about 100 of the operations a year, working every Monday in the private Trindade Hospital in Porto, a city on Portugal’s northern coast.

Today, he is operating on a young amateur footballer who got injured over the weekend.

After adjusting his mask over his mouth and nose, the surgeon calmly cuts into the knee of his patient, who is under general anaesthetic.

In one hand, Noronha holds an endoscope — an optical tube with a light to guide him — which is inserted into the body through an incision. In the other, he wields his surgical instruments.

Each surgical movement within the joint is relayed to a television monitor.

With small, precise movements, Noronha removes a section of the patellar tendon, which lies over the knee cap, and uses it as a graft to repair the torn anterior cruciate ligament in an operation lasting barely half an hour.

“I think the secret of a quick recovery is in the placing of the graft,” Noronha explains. “It needs to be fixed at the base of the torn ligament,” he said.

It is the same technique the surgeon used on the 28-year-old Falcao who ruptured the anterior cruciate ligament of his left knee during a French Cup match in January.

Noronha’s fame first began to spread after he operated on Cesar Peixoto, a veteran Portuguese international who ruptured his anterior cruciate ligament in 2003.

“Without him, I would certainly have had to stop playing a long time ago,” Peixoto said. “It’s not for nothing that they call him the Messi or the Ronaldo of knees.”

The injury is a traumatic event for a professional player.

“I will never forget the day it happened to me,” said Peixoto.

“It was in Marseille in 2003, during a Champions League match with my club at the time, FC Porto. Just after the 60th minute, I felt a crack.”

He had to be rushed off the pitch.

After a quick examination, it was obvious he had torn his anterior cruciate ligament and would need urgent surgery.

“Ten years ago, it would, very often, have meant the end of a career,” said the midfielder, who now plays for top-league Gil Vicente but who played for Benfica until 2012.

His doctors decided to call Noronha, who at that time was not treating famous players.

Six months later, however, Peixoto was ready to play again and Noronha’s name was being spoken of in football teams around the world.

The surgeon now works both with the Porto team and GestiFute, a management agency with players including Real Madrid star striker Cristiano Ronaldo.

Noronha plays down his success, however. “It’s just the fact of working in the world of football, that has brought me a certain fame,” he said.