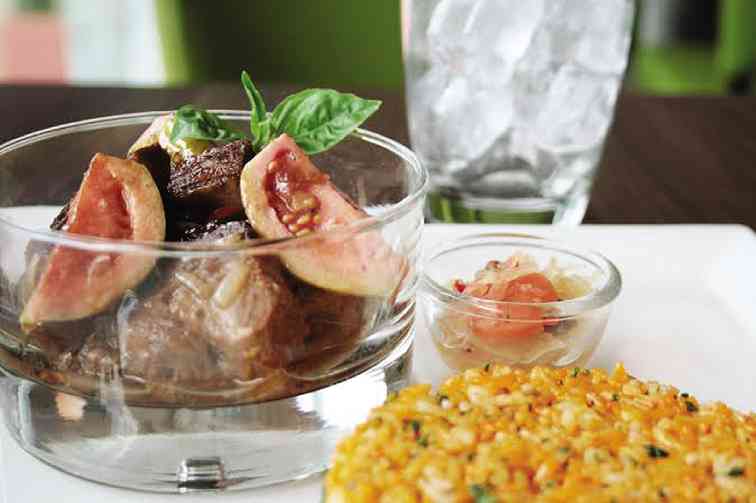 “Everything from scratch” is the best way to describe chef Katrina Kuhn Alcantara’s cuisine.

At her modern bistro, Mesclun, they make practically everything themselves—they cure their meats, make their own sausages and chips, as well as bake their own bread.

In her words, Alcantara describes Mesclun as a “chef-centered concept, largely influenced by my personal career and artistic evolution. It is a modern bistro and is not cuisine-specific.”

She decided to call it Mesclun (mixture) because of “the type of food that we serve, a mixture of different cuisines, different experiences,” gathering inspiration from her travels and the Internet, as well as relying on the individual talents and expertise of the cooks that make up her culinary pool. “I develop the recipes, but I collaborate a lot with my team of chefs now so they also contribute to the menu.

“The menu is predominantly European-influenced, but we have some Filipino and other dishes, as well. I like to mix dishes—the old world classic and the new world refreshing.”

I had been wanting to visit her newly opened Eastwood branch, but I’ve been unsuccessful. Instead, I gave Katrina a call to ask if I could order food from her to give it a try. She was quick to say that it wasn’t going to taste the same, but I insisted, nonetheless. So she picked for me what she thought would hold well, some of which are her restaurant specialties.

I had her guava adobo, which was fruity and flavorful. There was just enough of the thick sauce to make it fruity but not too much that it was overpowered. Just a gentle hint. The soft adobo comes with atchara and rice pilaf.

She also sent me one of her bestsellers, her house-cured corned beef. She proudly declared that it’s preservative free, thus making it very clean and fresh-tasting. The tender chunks of meat are served with the broth, shredded cabbage, balls of potatoes and carrots, plus pearl onions.

The addition of the pearl onions gave this dish another dimension—suddenly, a burst of tartness and crunch. A nice surprise upon first bite, quite different from your usual corned beef. It is also served with the classic mustard and horseradish cream.

My favorite was the Norwegian pan-seared halibut with black ink seafood risotto. Tasty, fatty halibut and a flavorful risotto that went perfectly well together. Loved it. Easy to eat. Delicious. It just went down really well, and to think it was not fresh off the stove!

Another must-try is her house-baked ciabatta. She serves it at the restaurant, but you buy some, leave it in the freezer, and simply pop it in a toaster oven for 10 minutes and voila, great-tasting, crusty bread!

When I asked Alcantara what she likes people to remember Mesclun by, she simply said, great food and great service.

Chef Enet Santiago was never really new to the world of food. His mother owned a meat shop in Edsa Central, while his father used to run the canteen of Rizal Medical Center.

Santiago’s career path took off under the tutelage of chef Billy King, who he first trained for, both at the Manor in Baguio and then at Fairways in Boracay.

But his hobby ever since has been to make sausages, with the ultimate goal of creating a perfect Hungarian sausage. He tweaked his recipe a couple of times until one day, he was confident enough to serve it during a function, and it was a hit!

This is how he came to be an artisanal sausage maker, creating specialty sausages of both local and imported origin for his clients. He also has a couple of his own versions of longganisa.

Chef Enet exclusively produces sausages for restaurant and catering establishments. Give him a sausage profile, and he’ll make it just for you.

My personal favorites are the English Bangers made aromatic and flavorful with sage, mace and nutmeg; his all-pork Hungarian with cracked peppers, paprika, fennel and cheese; and the chicken hamonado.

There’s no substitute for freshness, and in the case of Enet, it’s the use of the freshest, handpicked, newly slaughtered pork, from where else but their family meat shop, that makes his sausages all so special.