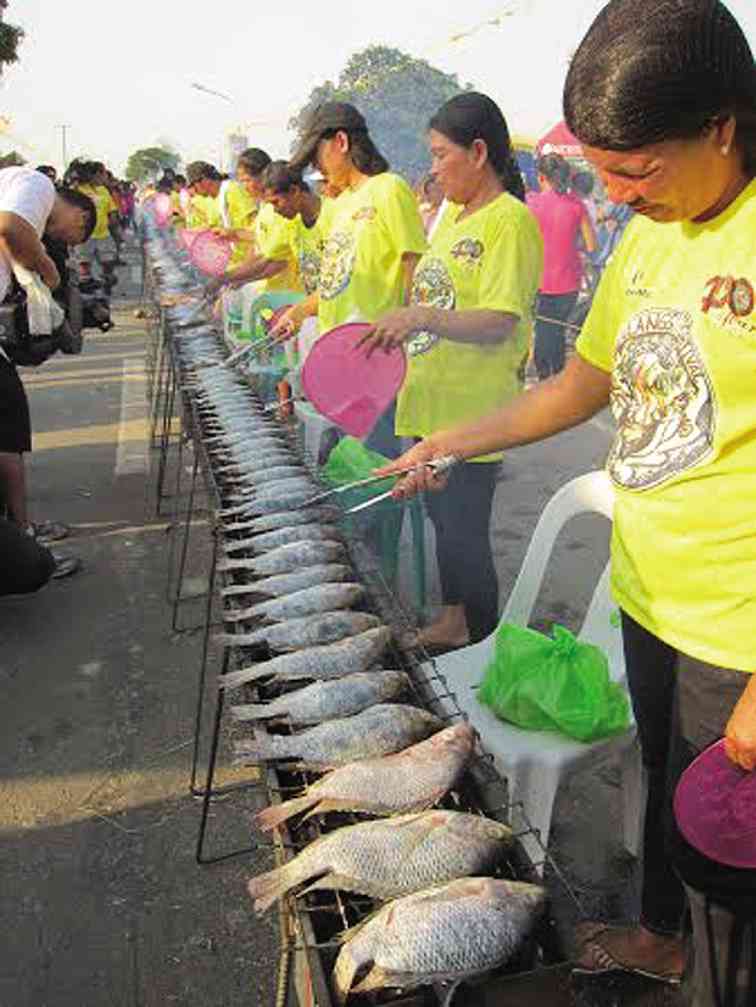 BAYAMBANG'S 8 kilometer-long barbecue makes it to the Guinness World Book of Records.

This April is turning out to be full of nice surprises.

Two weeks ago, I sent a message to chef Tonyboy Escalante asking what dates he would be in Singapore, because I was attending the World Gourmet Summit and had heard that he was nominated for an award.

This chef, apparently so focused on the kitchen, was oblivious to the news. “I’m nominated?” he asked.

After confirming that he, indeed, was nominated but could not fly to Singapore because of a launch conflict, he added, “Can you receive the award for me if I win?”

But I was leaving Singapore March 30 and the awards ceremony was  April 5.

His wife Agnes, the wonder woman behind Antonio’s farm, on April 5, shared the good news from Singapore: Chef Tonyboy Escalante was awarded the World Gourmet Summit’s 2014 Manitowoc Restaurateur of the Year Award.

This is no small trophy. The World Gourmet Summit (WGS) is the pioneer annual gastronomic extravaganza in Singapore that showcases the intricate craftsmanship of prestigious chefs (www.worldgourmetsummit.com). It has also been hailed as one of the six best gourmet events in the world (Sydney Morning Herald).

It brings in chefs from all over  to showcase their talents at select restaurants.  I flew to the Lion City to experience the cooking of Sang Hoon Degeimbre, the Korean-born chef of L’Air du Temps in Belgium (www.airdutemps.be), who has two Michelin stars. With hosting chef Benjamin Tan, he showcased his “Modern Terroir Cuisine” at The White Rabbit, an intriguing restaurant that used to be an old Catholic Church. (How’s that for Visita Iglesia? They converted the altar into a bar!)

It was an exquisite exhibition of gastronomic talent, with foie gras made to look like spaghetti and coconut meat made to look like linguini. It was as if the chef was playing with your mind the whole meal through—in a good way.

The good news is that the World Gourmet Summit obviously recognizes  chef Tonyboy  alongside these world-renowned chefs. The other nominees for the Manitowoc Restaurateur of the Year Award, which “seeks to recognize an individual who is the owner of an independent or chain of well-established, successful restaurant(s)… with a commitment to develop social initiatives in the culinary field and promote culinary and service excellence” were Philip Davenport of Ku De Ta in Bali, Chris Salans of Mozaic in Bali, Alvin Leung of Bo Innovation in Hong Kong and Takashi Kimura of Cilantro in Kuala Lumpur.

And chef Tonyboy bested them all.

From Singapore, I went to Bayambang, Pangasinan on   April 4, during the 400th founding anniversary of the municipality, to witness a historical event: Bayambang’s beating the current Guinness World Record for longest barbecue.

The M1 Shopping Centre in Gaziantep, Turkey, held the last record for longest barbecue in 2009, with a barbecue spanning a little over 6 km long. For the Malangsi Fish-tival (Festival) this year, Bayambang challenged this record by creating an 8-km long grill.

The grills, sponsored by businessman Cezar Quiambao, a Bayambang native, were built for this occasion, each grill measuring one meter.

It was an awesome sight watching the residents of Bayambang in one long grill line all cooking tilapia at the same time, in the afternoon heat. The barbecue line spanned 10 villages!

While Pangasinan is better known for bangus, Bayambang residents cooked tilapia because their town is the biggest producer of tilapia and freshwater fish in the province. It was interesting to note that the adjudicator from the Guinness World Book of Records, the lovely Seyda Subasi-Gemici, also had to taste the fish and make sure it was cooked, before allowing Bayambang to gain the title. Over 48,000 kilos of tilapia were cooked.

Congratulations to Bayambang for this Guinness World Record.

Imagine that, two international achievements just over the weekend. What a blessed Lenten season, indeed!