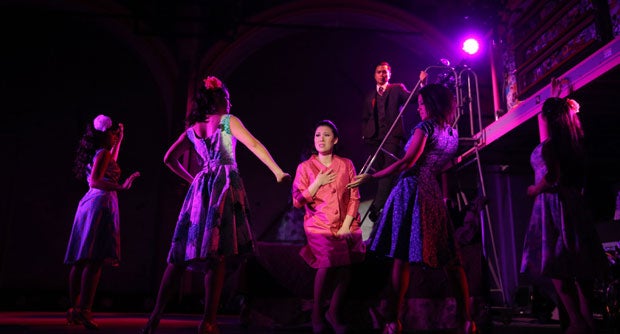 This undated theater image released by The Public Theater shows Ruthie Ann Miles, center, during a performance of "Here Lies Love," in New York. When it was in the Public's LuEsther Hall last year, the show had a capacity of 160. This time, Dave Byrne and a group of commercial producers are hoping to push that number to 200. Byrne, who teamed up with Fatboy Slim on the music, has been shepherding the show for 10 years. AP

NEW YORK—David Byrne has been thinking a lot about numbers recently.

As in: How many people packed into a room makes it a happy mob? What’s the perfect number you need to make them lose their inhibitions and dance? What if there are too many? Too few?

The Talking Heads frontman’s preoccupation has been triggered by the reopening of his immersive show “Here Lies Love,” which returns this month to the Public Theater downtown.

The exact number of people is important because the show is staged as an interactive disco that charts the rise and fall of Philippine ex-first lady Imelda Marcos. The audience mills around or dances as platforms move and the action switches from one side of the room to the other.

When it was in the Public’s LuEsther Hall last year, the show had a capacity of 160. This time, Byrne and a group of commercial producers are hoping to push that number to 200 or so.

“There gets to be a tipping point where a certain number of people become a crowd. I don’t know that exact number. I’m sure it has something to do with density,” Byrne says. “By increasing the number, we’re going to kind of push it further that way and that’s going to be great.”

Byrne, who teamed up with Fatboy Slim on the music, has been shepherding the show for 10 years, ever since a light bulb went off in his head when he learned about Marcos owning a disco ball.

It turned out the former beauty queen-turned-dictator apparently loved to dance, converted the roof of one of her Manila palaces into a nightclub and hit discos regularly in the 1970s.

From concept album to full-blown theater

The unique project began as a concept album, performed in a handful of live concerts including a 2007 engagement at Carnegie Hall, before it was developed into a full-blown theater piece directed by Alex Timbers.

The musical begins with Imelda as a poor girl who gains fame as a beauty pageant winner. Following a whirlwind courtship, she marries up-and-coming politician and soon to be president, Ferdinand Marcos.

The Marcoses ruled the Philippines from 1965 to 1986—the last 14 years of that under martial law—before being driven into exile in Hawaii during a 1986 popular revolt, leaving the country’s economy faltering under huge debts. Ferdinand Marcos died in 1989 and Imelda has since returned to her homeland and entered politics.

“I wanted you to understand a little bit what’s motivating Imelda, what’s driving her, what her delusions are, but also what her pain is, what she loves, so you understand what makes her do the things that she does,” Byrne says.

It turns out that disco—bombastic, sentimental and a tad delusional—works well with a story that may leave theatergoers feeling uneasy about how much fun they’re having. The show ends with democracy restored, but no mention of her collection of 1,220 pairs of size 8 shoes.

“It’s a very artful line that they walk, ever so carefully, between trying to be historically accurate, trying to make a political point, but also be entertaining,” says producer Joey Parnes. “You come out feeling like you’ve had an exhilarating experience.”

Byrne—an art-rock progressive who famously sang “This ain’t no party/This ain’t no disco”—says he’s never had anything against club music. In fact, his record collection included Donna Summer, The O’Jays and The Spinners.

Using disco in “Here Lies Love” allowed him to pay his respects to that sound but also freed him to write songs for other people that he wouldn’t write for himself. That feeling was extended by his lyrics, which are mostly taken from speeches or interviews from all sides during Marcos’ era.

“I used their words as much as I could possibly do,” he says. “For me, that felt like it was a way of keeping it honest. I was keeping me from projecting my own editorializing into it.”

Byrne and the producers have been looking for a permanent home for the show since last year but it proved hard to find a space big enough in Manhattan that could accommodate a huge rotating rectangle stage. Byrne is unsure if the show can be enjoyed the same way in a traditional proscenium.

Parnes is still on the hunt for a space and hopes the show might eventually tour the US and boogie on to Australia or London, playing to larger audiences. He’s also fascinated by the right number of people and thinks it can still be intimate with up to 500 people per show, which would make it more financially viable.

Byrne, for his part, hasn’t been scared off. He’s working on a new musical that, like this one, uses no spoken dialogue. But he hopes it doesn’t take another decade.

Might it also involve another powerful person? One who also created an insulated world? Byrne laughs: “Somebody will do a musical about Henry Kissinger, but I don’t think it will be me.”—Mark Kennedy