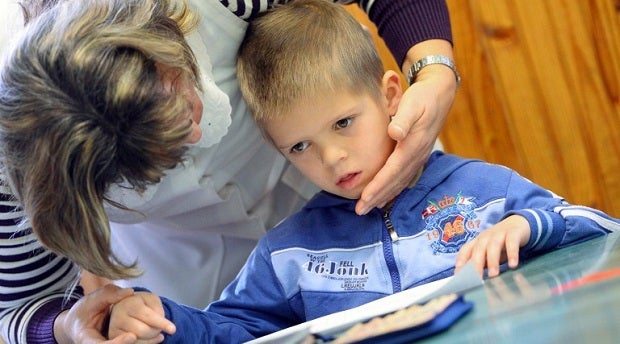 A pupil is helped by his teacher in a classroom in a special school for disabled children in Gyongyos, northern Hungary, on Dec. 9, 2013. Families raising special children should not consider them as a “chastisement by God,” according to Sorsogon Bishop Arturo Bastes. AFP/ATTILA KISBENEDEK

MANILA, Philippines—Filipino families raising special children should not consider them as a “chastisement by God,” according to Sorsogon Bishop Arturo Bastes.

In a recent homily at the Saints Peter and Paul Cathedral in Sorsogon City, the bishop was quoted by a Catholic Bishops Conference of the Philippines report as having said it would be wrong to look at special kids as a curse from heaven.

“In the future, special children can be bearers of prosperity, if not play important roles in society,” he said.

Quoting a biblical passage, Bastes said, “It was neither that this man sinned nor his parents, but it was so that the works of God might be displayed in him.”

“God’s works are demonstrated in children and even adults with physical and intellectual defects,” he added.

According to Bastes, determination can motivate a child with such defects to become useful and in his older years, he can do things that could even compare to the achievements of notable people.

He cited American author and political activist Helen Keller, whom he described as “one of the most intellectual deaf and blind persons who ever lived.”

Keller, he said, was a “testament to how God works.”

“Despite her blindness, Keller was a light… She championed women’s rights. She saw light and shared it with others,” the bishop said.

However, Bastes said, “there are people who are not blind but cannot see.”

“Their faith should have grown because their eyes are open, but they refuse to see because they are stubborn,” he added.

The bishop claimed “there are also people who can see light but pretend not to see it.”

“Like a tree that does not receive light, people who refuse light do not bear fruits… With light they can bear fruits,” he said, referring to “love, justice and truth.”

Bastes also said, “sinners do their business in the dark so that others will not see.”

“In that sense, light will deter them from doing bad things because they will be humiliated by their own acts,” he added.