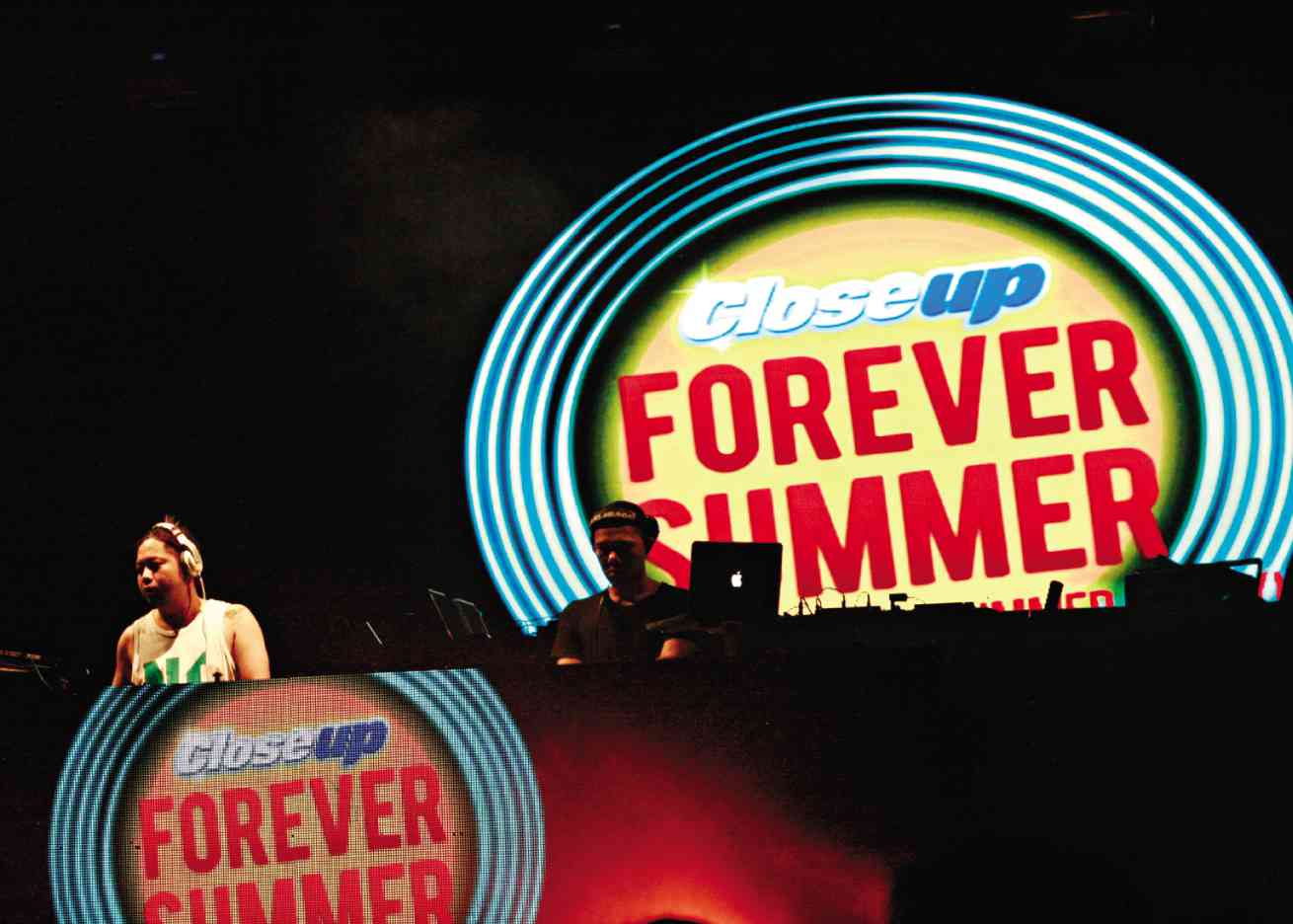 The heat became more bearable when the Closeup Forever Summer party was held recently at the Globe Circuit Events ground in Makati City.

The organizers had asked people what kind of summer music event they wanted and who they preferred to perform. More than 500,000 online respondents cast their votes. Results showed electronic dance music (EDM) and Swedish DJ-music producer Alesso as the people’s choices.

It was not Alesso’s first time in the country, having previously opened for Avicii a couple of years back. Alesso’s repertoire of progressive house music has made him popular worldwide for his remixes of other renowned acts like Tiësto and Kaskade, and of course, Avicii.

Recent hits include a remix of One Republic’s “If I Lose Myself” and “Years” featuring Matthew Koma. Alesso has also collaborated with Calvin Harris and Swedish House Mafia’s Sebastian Ingrosso.

Alesso’s powerful, pulsating sets have been lauded at major music festivals such as Tomorrowland, Ultra Music Festival and the Electric Daisy Carnival, and his appearance at Closeup Forever Summer was highly anticipated by his local fans.

Gates opened at mid-afternoon but people were still pushing their way in as late as 11 p.m. A large portion of the Circuit grounds was under construction, so there was limited parking space inside.

With traffic hardly moving, many opted to leave their cars and walk to the venue. It was quite a sight—concertgoers in tank tops, midriff-baring tops and shorts looking like they were going to the beach.

At a press conference a few hours earlier, DJs Helena and Deniz Koyu talked about their roots as artists and their music.

Previously a resident in Australia but now based in Los Angeles, the England-born Helena recalled training when she was only 14 years old. “My brother’s a DJ, and all my friends are DJs… My background has always been music. I don’t know anything else.”

But she didn’t always think that it would lead to a professional career. “I didn’t intend to become a DJ… I started playing just as a hobby, at a few parties. It was a natural progression…”

Success came in the form of sold-out shows in the United States and her ongoing Levity tour. She has also played alongside Benny Benassi and Avicii, and at last year’s Ultra Music Festival, which she said was one the biggest gigs she’s ever performed in.

Helena confessed a desire to collaborate with Alesso, as well as admiration for Steve Angello and Deniz Koyu. She said her style is “a mix of progressive and electro. I love the sort of big, progressive vocal tracks but I also like the instrumental tracks.”

She added: “When I play, and especially when the crowd get’s locked in with you, the atmosphere and the energy seem to override everything. You don’t even think when it’s like that. You just play.”

It’s not easy to establish oneself as a DJ, and it’s more difficult as a woman in a male-dominated field. Helena said, “You go to festivals and it’s probably like, 98 percent male in the lineup. There are few female artists in these big festivals.”

Helena believes that the future of EDM rests on the music producers. “The term ‘EDM’ is quite new,” she said, “but house music has been around forever. I think it’s up to the producers to keep things interesting. You have, obviously, a big room, you know, with electro, progressive… There’s a lot of responsibility on the producers, not to overkill the sound… Some producers… you can hear how creative they are, their foresight in what they’re doing. But there are also others who do not put much thought into it. So, I think you can hear it when somebody’s put a little more effort into a track. It’s more unique, it will stand out.”

She revealed: “I never preplan my sets. I don’t feel that you can do that because I work off the crowd. I need to kind of get in there, size up everything in front of me, like how many people are there, what’s the vibe.”

Deniz Koyu, meanwhile, is a Turkish DJ who has enjoyed support from Avicii, Tiësto and Swedish House Mafia, and was once named MTV’s EDM artist to watch for.

“From the beginning, when I started making music, I had many different influences,” he said. “I think my first influence as a child was Michael Jackson. I’ve always been a huge fan of his albums, ‘Off the Wall’ and ‘Thriller.’”

When he got into electronic music, he liked trance, and then techno. “I was listening to every kind of music. I’m from this small city in Germany, and my friends in school didn’t really listen to electronic music. I got a few vinyls at that time. I got into it quickly,” he recounted.

He started producing house music 10 years ago. “I love the music from all the Swedish guys—Sebastian Ingrosso, Steve Angello, Eric Prydz, but also Bob Sinclar, Roger Sanchez, Eric Morillo… I like to experiment with the music on the computer. One of my friends gave me the program, it’s called Reason. It’s a simple program. At the time I was listening only to house music. I was like, 18, 19. You try to find out how you could make that kind of music. I got into it, and I liked it,” he said.

But, like other creative artists, he keeps an open mind. “When I’m home and I’ve got free time, I listen to indie pop and indie electro. Could be MGMT or sometimes Flu, but there’s different stuff, anything that can inspire me. I love listening to Swedish music. A lot of the good stuff from indie pop is coming from Sweden. Sometimes it’s crossover pop and indie pop, but I don’t really care about genres, to be honest,” he explained.

Making music, for him, is a continuous process even while he’s on tour. “Most of the time I’m traveling, so I got my MacBook with me to come up with some ideas. When I’m home I go into the studio, take my laptop, and try to produce the actual song. Ideas come with a beat or with a melody. Depending on what I start with, it turns into a different song,” he pointed out.

Based on this recollection, he’s probably been working on melodies lately. “I have other songs that are coming up, that I’m actually working on right now… They’re more like radio songs, more melodic, and with vocals, and stuff like that,” he said.

As a DJ, one expects that someone else will probably make a new mix of what he’s created and play it in front of the same crowd. There is always the probability that someone might actually play something that sounds similar, but not necessarily better.

When it comes to his own tracks, however, Deniz makes an effort to be one step ahead. “I always have my own edits of my own songs. And usually, they’re edits that only I can do because I got the parts of my track… What I do is edit the production of the track. Not like just cutting the track—anyone can do that. When I go into a project, I do something with it that’s gonna make it different,” he said.

“When I play my tracks I try to put them at a certain point in my set. I always have my intro track, that’s one of my own productions, and I have certain edits and mash-ups with my tracks. I always try to keep a good flow in my set. That’s very important to me,” he explained.

He added that he hardly gets preshow jitters anymore, except maybe in huge festivals like Tomorrowland or Tomorrowworld where he has also performed.

However, he gets excited about all his shows. He was quite amazed by the social media hype for Closeup Forever Summer. “It’s my first time here, but what I’ve seen is, my Twitter has been going crazy for two months. Honestly, I don’t think I’ve ever gotten so many tweets for a single show,” he said.

As it turned out, Closeup Forever Summer 2014 was one party to remember. Good music and all-out fun ruled the night.

The VIP and Gold sections were filled almost to the brim. The crowd had already thickened by the time Mars Miranda and Ace Ramos played their sets, with more people coming in. These two local DJs pulled tricks off their sleeves, serving the audience different-flavored doses of rock anthems such as “Living on a Prayer” and “We Will Rock You.”

It was perplexing yet amusing to see people chanting while dancing.

The energy was infectious, with a sea of bodies and arms swaying to the music. The excitement grew notches higher when the international acts took the stage, starting with Helena, followed by headliner Alesso.

Fans stood up and danced throughout Alesso’s two-hour set which included “City of Dreams” and “If I Lose Myself.”

Deniz Koyu was last on the bill, winding up with a round of tracks that included Beatport hits “Bong” and “Tung.”

Closeup Forever Summer was a feast for the senses in more ways than one. The much-awaited music and dance extravaganza was made even more memorable with the addition of a pyrotechnic show, neon strobes, technicolor animated graphics on LED screens, and a few celebrity sightings.

As the night wore on, glow-in-the-dark sticks and wands were distributed to the audience so they could become part of the visual spectacle.

It was, indeed, a night to remember, a musically-charged and adrenaline-pumped party  to welcome summer.