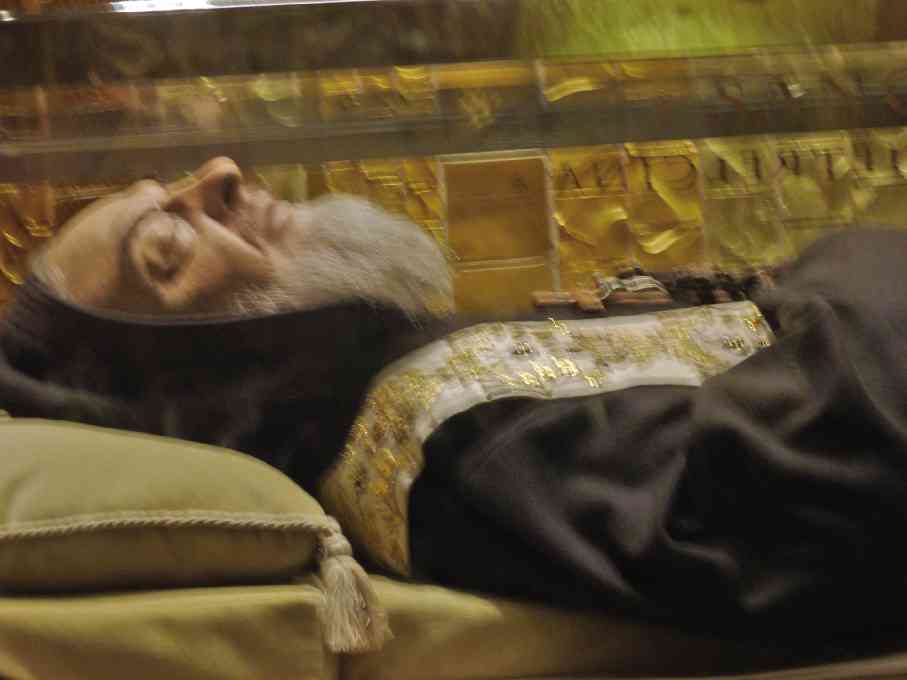 Getting to know Padre Pio

At 12:40 p.m. on Jan. 14 I arrived at Leonardo da Vinci–Fiumicino Airport in Italy for an administrative council meeting with Communio Internationalis Benedictinarum (CIB), the international community of Benedictine women. It was cold and rainy.

I was so tired from 24 hours of traveling that, after the meeting at 5 p.m., I went straight to bed without having supper or attending Vespers.

The next day was spent attending more meetings, after which Father Abbot Primate had dinner with our group.

On the third day, there was still one more meeting with the organizing committee. In the evening, Sr. Gabriela and Sr. Celestine brought Sr. Lumen and I home to the Casa. While in San Antonio, I told Sr. Lumen about my wish to go to the shrine of Saint Padre Pio of Pietrelcina. She suggested I should ask Sr. Agnella to accompany me.

On a Saturday, Jan. 19, Sr. Agnella and I boarded the train to Foggia where we would have to ride a bus to Padre Pio’s shrine in San Giovanni Rotondo.

It was like going to Baguio, zigzag and all. Reaching the mountaintop, we saw a big city spread before our eyes.

We went to an old church, which is actually two churches—a small one and a new, bigger site. It is the sanctuary of our Lady of Grace where Padre Pio used to hold Mass and hear confession.

In the small church is a lifelike statue of Padre Pio holding the child Jesus.

In the bigger church we followed a sign that said, “Tomba” (tomb). It led to a museum with pictures of Padre Pio as a young seminarian, his parents, their house in Pietrelcina in Benevento, among others.

There were also glass cases displaying the vestments, chalice and ciborium he used.

When we finally reached the tomb, it was empty. We were told that his body was placed in the new big church at the back. The church is enormous; on one side was a stained glass window with an apocalyptic design.

But the real jewels here are the Blessed Sacrament chapel and the tomb of Padre Pio. Brightly-colored frescoes decorate the chapel, while the tomb is filled with mosaic pictorial art depicting Scripture scenes.

On the corridor outside are renderings of Padre Pio’s life. According to Sister Lea, the Filipino nun at the information counter, all the decor in the Blessed Sacrament chapel and the tomb are gifts from the Padre Pio Center in Manila.

We proceeded to Monte Sant’Angelo to see the cave where St. Michael was said to have appeared three times to one bishop, and another time to another bishop in the year 492.

Many saints, including St. Francis, as well as popes, have visited the cave. This was where we had an interesting adventure.

We thought the cave was somewhere in San Giovanni Rotondo, so we thought of stopping by and proceeding to Foggia to get on a train at 7 p.m. to go Barleta, the Celestine convent where we planned to stay overnight. But after boarding the bus, we noticed it was heading out of the city—which meant that even if we arrived in Monte Sant’Angelo, it would be impossible to catch our 7 p.m. train.

A kind woman sitting beside Sister Agnella on the bus said not to worry because there was a pilgrim house in Monte Sant’Angelo and it was not expensive.

When we arrived in the pilgrim house, we were told that it was temporarily closed because the staff was on winter vacation.

But the kind woman on the bus brought us to the church where the Mass had just finished. We talked with the Mass celebrant, Father Marco of the Congregation of St. Michael, who told us not to worry about our lodging.

As it turned out, we got to stay in the monastery of the Fathers which is attached to the grotto we wanted to visit. How amazing God’s goodness is, and the generosity of the Michaelites. We were invited to supper where they told us the story of the apparitions of St. Michael and the foundation of their congregation. They said they took the place of Benedictine monks who used to take care of the grotto for 25 years.

They also told us that Luis Antonio Cardinal Tagle came to visit the grotto before the conclave and Father Marco toured him around. Right there and then, I texted Cardinal Tagle with the monks’ greetings. Immediately he replied, thanking us for the greetings and telling us to enjoy our stay in Italy.

While having supper we told the monks that we had to leave for Foggia right after the Mass, because we were told by a lady working in the monastery that there was no direct bus or train ride to Foggia; we had to take a bus to another city, and then from there take a small train to Foggia, where we had to catch the last train to Rome at 2 p.m.

We were anxious to get there by any means necessary because Sr. Agnella had to take an exam the next day. Before finishing supper, Father Marco said not to worry, because Father Paolo, a young, shy monk sitting beside me, would bring us by car to Foggia! That was what I called an extravagant generosity!

So, with a light heart we went to bed—Sister Agnella and I had our own individual room, with a beautiful mountain view.

We had breakfast at 8 a.m. and then spent time meditating in the Reconciliation chapel.

We still had time to walk through the quaint town.

It is a beautiful mountain town with white houses, their doors opening right into the paved streets. There are steps leading to other streets.

We went along the main street and found a church of St. Benedict, where there is a statue of St. Scholastica with St. Placid and St. Maurus. But the main statue on the altar is St. Anthony the Abbot.

The view of the valleys below was fantastic.

We had to hurry back to the monastery because Fr. Paolo was bringing us to Foggia at 11:30. He was so shy, he wouldn’t say a word unless you talked to him. But, when we said it was so nice and generous of him to bring us to the station, he said: “It is  a joy!”

When I asked him how long the ride would take, he said “about 20 minutes.” Actually it felt like an hour because we had to go down the mountains, then take the freeway to Foggia.

As we neared Foggia I asked if we could invite him to lunch; he shyly said, “thank you,” but he would rather go back to the monastery. Well, at least he accepted a bar of dark chocolate I gave him.

In the station we found out that we were to take the last train to Rome and there was only one seat in the second class. We didn’t want to sit separately and since the difference was only 18 euros and we had saved on hotel and meals as guests of the monastery, we chose to go home in style—via first class in an Italian train.

We got home tired but happy, having prayed for all our loved ones, especially those who were sick or who had problems.

My reflection on our experience is that life is like a pilgrimage. We meet people along the way who help us in the rough spots, who steer us to the right direction and make us realize that God is with us all along.