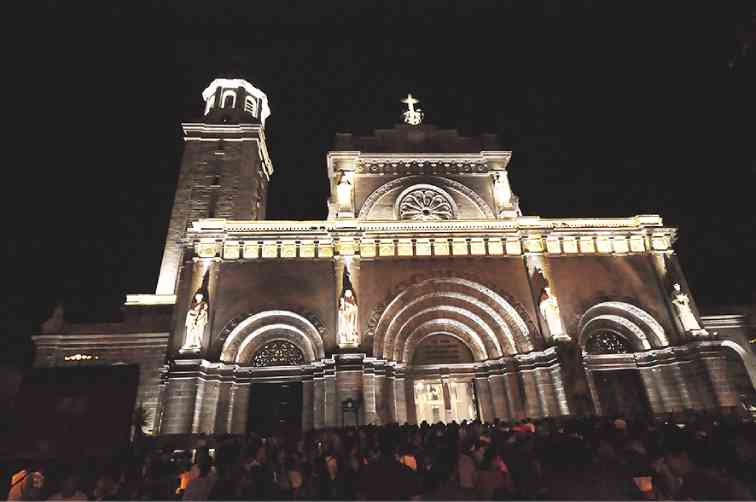 NEO-ROMANESQUE design is best seen at night after after artistic lighting was installed. Designed by architect Fernando Ocampo, the current façade was based on a previous one by Vicente Serrano.

One could tell that half of the selfies that will flood the Internet on Visita Iglesia this Holy Week will be taken in the renovated Manila Cathedral-Basilica of the Immaculate Conception.

Since its doors opened on Wednesday, nearly one in every two persons who entered the more than 400-year-old church in Intramuros had a camera or smart phone.

And people would pose everywhere—on the steps, in front of the altar, right beside St. Peter’s impressive statue. A surreptitious click right up there on the pulpit would not be a surprise.

Tagle described the event as “a day of rejoicing” and in a quivering voice, recalled how the faithful, from big corporations to the poor, gave what they could just so the Archdiocese of Manila would finish the retrofitting and restoration of the church.

The cardinal recalled getting handfuls of coins and envelopes containing P50 from people who approached him after learning of the efforts of the Manila Metropolitan Cathedral Basilica Foundation Inc. (MMCBFI) to repair and strengthen the historic structure.

Tagle mentioned acts “fueled by faith,” such as when various specialists like sound engineers and marble and soil experts consulted about the project, would invoke the name of the Virgin Mary when faced with challenges.

“Para kay Mama Mary at sa simbahan, gagawin po namin lahat ng makakaya (For Mama Mary and the Church, we will do all that we can),” the cardinal quoted them. 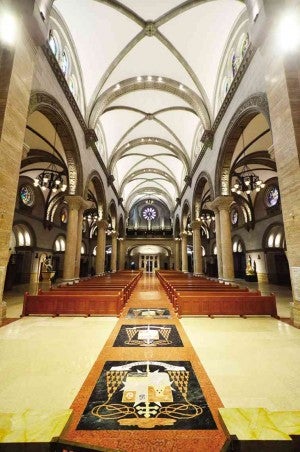 There were also workers who, Tagle said, did nothing short of performance feats while working on the ceiling of the cathedral.

“Some portions of the ceiling could not be reached by the scaffolding so nakabitin sila (workers) para matapos lang ang trabaho.  Naghihintay na lang ako ng tawag from (cathedral rector) Msgr. (Nestor) Cerbo (to report an accident).  And I said to myself, hindi na lang ako sasagot,” the cardinal recalled light-heartedly.

There was also a choir who performed for free for a fund-raising benefit for the cathedral’s restoration.

The choir members agreed to sing pro bono, noting that they had performed countless times for brides and grooms who were married there, Tagle said.

The day after the cathedral reopened, all pews of the 2,000-seat capacity church were  filled with people who heard the 12 noon Mass.

The four pairs of LED bulb-lit chandeliers hanging above the two rows of pews cast a soft glow on the faithful, complemented by the noonday sun.

Ventilation was adequate as all doors on the ground floor were opened.

Flat-screen TVs have been hoisted on the pillars beside the pews to give the prayerful a look at the altar in case the pillars blocked their view. 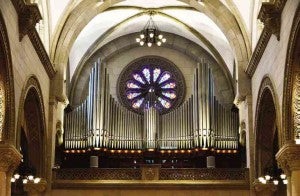 Just above, stained glass depictions of biblical events, including the Stations of the Cross, the Mysteries of the Holy Rosary, the Infant Jesus’ baptism and the storm in the sea of Galilee, evoke a more reflective mood.

Churchgoers noted how the cathedral now looks brighter and airier.

Ambassador Henrietta de Villa, vice chair of the MMBCFI board of trustees, said it was Tagle’s predecessor Cardinal Gaudencio B. Rosales who initiated moves to improve the structure.

“There was a spate of earthquakes in the country and around the world and he wanted to make sure that the foundation of the (cathedral) was sound and strong,” she said in an email interview.

“First priority was to come up with a professional study of the cathedral’s structural integrity.  We contracted Angel Lazaro and Associates International (ALAI) to do this,” De Villa said.

She added that engineer Lazaro was chosen for his reputation as “an authority in structural design and review.”

“ALAI reported that while there was sufficient foundation support—pillars, bases, etc.—this needed to be enhanced, or in engineering terms, retrofitted.  Retrofitting will make the foundation stronger and enable the cathedral to withstand pressure of tremors, vertical or horizontal, of earthquakes,” De Villa said.

“While there can be no 100 percent guarantee against earthquakes of great magnitude, still with the retrofitting of the foundational structures there is a better chance for the cathedral to stand its ground.  For the retrofitting job, excavations will have to be done in major parts of the (cathedral), hence its momentary closure was necessary,” she added.

It was Chief Justice Panganiban, who noted in a speech before the Reopening Liturgy on Wednesday, that the cathedral’s construction began in 1571.

In that era, what stood in front of the Plaza Roma was a simple parish church governed by the Diocese of Mexico.  It became a separate diocese eight years later following a papal bull issued by Pope Gregory XII.

The original cathedral was built in 1581.

De Villa said the cathedral had been “reduced to the ground seven times” since then, the last being the 1945 bombing of Manila during World War II.

This means the structure that Rosales ordered examined was more than 50 years old, she added.

It was John Paul II who issued a papal bull declaring the cathedral a minor basilica two months after his visit.  It is dedicated to the Blessed Virgin as the Immaculate Conception, the patroness of the country.

By the time ALAI completed the tests on its structural integrity, Tagle had already succeeded Rosales as Manila Archbishop.

It was Tagle who approved the momentary closure of the cathedral two months after assuming office on Dec. 12, 2011, De Villa said.

“Just like any old house that is being renovated, once the cathedral was opened for repair or retrofitting, other defects were uncovered due to the wear and tear of time and usage,” she recalled.

The plumbing and electrical systems were in bad need of repair. There were chips in the arches and stains and cracks on the walls.

The baldachin and other parts of the altar and chapels were discolored, and flood water seeped into the crypt where the former archbishops of Manila—Archbishop Gabriel Reyes, Rufino Cardinal Santos and Jaime Cardinal Sin—are buried.

All these areas were included in the restoration project.

De Villa identified SP Castro Inc. as the restoration manager of the project.  She added that DM Consunji, SP Castro and ALAI donated their services to the church.

Panganiban also thanked generous donors, including Ramon Ang of San Miguel Corp. and George and Mary Ty of the Metrobank group, in his speech before the Mass.

According to De Villa, other benefactors  were Justa Lee, Antonio Oppen and Bert Lina.

She noted that “nothing new” was added to the cathedral’s structure except for the new lights, the sound system and a CCTV security system.

Its current 13-bell carillon would soon be replaced by state-of-the-art set of 23 pieces to be imported from The Netherlands.

“And the antiquated air-conditioning has to be changed as soon as we find a kind donor,” he stressed.