The Diana Vreeland set that got its own applause? That’s by Joey Mendoza | Lifestyle.INQ ❮ ❯ 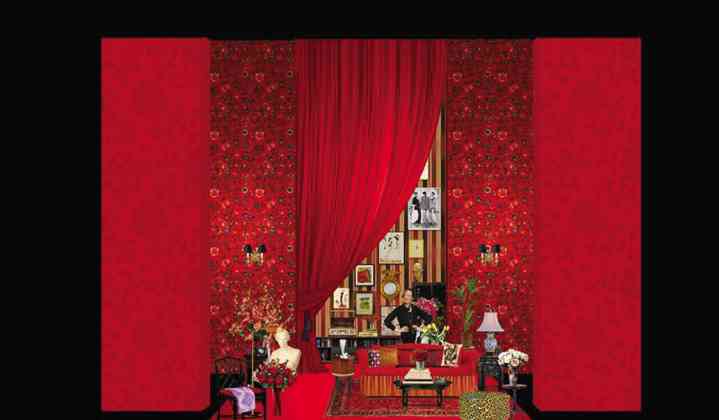 “FULL Gallop” set rendering. “It needs to have a sense of humor, I think,” says Mendoza. “The set, like Vreeland, while at first might seem intimidating, is actually warm and funny.”

The Diana Vreeland set that got its own applause? That’s by Joey Mendoza

It isn’t every day that a set design receives applause from an audience.

Joey Mendoza’s scenery for “Full Gallop,” a play about former Vogue editor in chief Diana Vreeland after she’d been axed from the magazine, received applause for every single show in its recently concluded run, staged by Actor’s Actors Inc. and My Own Mann Productions, at RCBC Plaza in Makati.

When the curtains rose at the start of the show, audiences invariably burst into spontaneous clapping at the sight of Mendoza’s interpretation of Vreeland’s apartment.

Mendoza had seen the original production of “Full Gallop” in New York.

“I immediately thought Manila would relate to this easily,” he says.

Last year, when he heard there was talk of a Manila run, he got in touch with director Bart Guingona. “He’s a friend from way back. I told him I knew the show well and it’s been a dream to design it.”

Guingona extended an invitation to design the set, and “I agreed immediately! Cherie Gil, the play’s star and producer, was in New York December last year and we met at Tabule restaurant in Hell’s Kitchen. I showed her some sketches on my iPad over appetizers and we got along famously. She was animated and funny and I had no doubt she could own the stage I wanted to design. I was designing the set with her in mind from the get-go.”

Mendoza is mindful that not everyone knows who Vreeland is.

“However, I don’t think anyone who knows more about fashion would enjoy ‘Full Gallop’ exponentially more than those who know less. The show is really about this force named Vreeland who was a larger-than-life character, a character that has to draw audiences and not scare them off—and designing the show had to reflect that.

“I also only knew a bit about Vreeland. I’m not a hardcore fashionista, but in Manhattan, you’re constantly assaulted by fashion and style on the streets. Vreeland differentiated fashion and style: It isn’t what you are wearing, but how you are wearing it—and I think the same can be applied in set design. You can have all the right fashionable pieces, but putting it together is the key.”

Mendoza read the play, Vreeland’s autobiography “DV,” and other articles about the woman to get to the bottom of what she was like.

“If she were still around, how would she like her apartment to look today?” he asked himself.

Mendoza then made a mood board with photos of Vreeland’s Park Avenue apartment, accessories and other images that helped inspire the tone of his design.

“One of the images in my mood board was a bottle of Opium Yves Saint Laurent perfume. I liked the gloss and clean lines, that black tassel and the leafy pattern on the box. I used some of that in the final design,” he recalled.

From there, Mendoza worked on crafting the look. “I researched other designers’ work on the Internet. The original production’s design by James Noone is a wonderful recreation of her famous red apartment, which worked well in Manhattan Theatre Club’s intimate space. That was sort of the trend in set design in the ’90s, but it’s already 2014 and I definitely did not want to recreate that.

“Her ‘Garden in Hell’ apartment was designed by arguably the most celebrated interior designer at the time, Billy Baldwin. I didn’t think it wise to mimic him.

“When I saw the play, I remember feeling like I was the early guest in her dinner party and she was entertaining me in her own ridiculous way, but always with a knowing wink and look, as if I were in on the joke.

“‘Full Gallop’ isn’t a documentary or a museum piece. It’s theater! And Vreeland is so theatrical. The play seems hysterical and large and I sensed that a realistic apartment wasn’t right for this.

“I designed the three different wallpaper patterns: paisley, chintz and striped. The first two had a garden motif (leaves, vines, flowers) and there is a touch of blue in the chintz pattern that supposedly adds a somewhat ‘bruised’ hue.

“The third was a homage to Baldwin. I like the sort of whimsical, almost circus-like candy stripe pattern and palette.

“The focal point is an enormous tied-back curtain, to add softness and texture and a sense of drama. Also, I think it’s just hilarious, to have this huge fabric swatch on stage. The set needs to have a sense of humor, I think. The set, like Vreeland, while at first might seem intimidating, is actually warm and funny.”

Mendoza was also inspired to create a hanamichi (a platform connected to the stage) for the set following a line in the play that mentions a kabuki actor.

“The runway platform used in kabuki is pretty much the same idea used in fashion shows. The set needed to be hyperbolic and operatic in scale, but intimate at the same time.”

Mendoza also used music to enrich his process. “The play did not have a sound designer on board, so I just forged ahead with a song list myself and Bart was open to it. The set needed that support.”

“The set is a modern interpretation in the spirit of Vreeland and I think it is critical that music should establish that. I didn’t think a literal all-period, early ’70s and oldies mix would have been right. How boring!

“I listened to jazz, swing, house, lounge, pop and hip hop. The songs before the play begins are performed by Rose Murphy, very playful and childlike. It turns contemporary—Parov Stelar’s Booty Swing, followed by Lil’ Louis, Demitri from Paris, Lady Gaga, Justin Timberlake and eventually Jay-Z and Alicia Keys doing ‘Empire State of Mind’; artists she would probably be hanging out with today.”

Working across the world

Mendoza was a Repertory Philippines workshop attendee who graduated into backstage work and acting roles. His first set design was for a staging of the musical “You’re a Good Man, Charlie Brown” in Dumaguete City.

Mendoza moved to New York in the early ’90s and got involved with Rep alumni Jorge Ortoll’s theater group, Ma-Yi Theatre Company, as a board member and designer. Since then, his work has been seen on the stages of LaMama ETC, The New World Theatre, Theater Row and others.

“Working long-distance is an unconventional but not untried method; other foreign-based designers have done it that way before. Also, working styles in NY can be very different from that of Manila and I needed to adjust to that. There was a lot of email exchanges and Skype-ing in the process and that helped tremendously,” he says.

Mendoza created a source book for the production team, a detailed compendium of images for every single item used on stage: A variety of coffee tables, side tables, consoles, chairs, lamps, carpets, accessories, flowers, vases, etc.

“Vreeland says ‘I only want beautiful things!’ in the first few minutes of the play. I think it says it all.”

“I was fortunate enough to have a great team headed by production manager Ria Pangilinan to go on a scavenger hunt throughout Manila and beyond. In the end, only the bookshelf had to be custom-built. The production’s set assistants Jojo Amboy and Ogie Reonal were tenacious and sticklers. The set couldn’t have been done without them.”

“I requested my brother, Anton, who is a successful interior designer in his own right, to be my eyes. He showed up on production week and adjusted the furniture and accessories. He walked all around the theater and adjusted accessories and set pieces for maximum impact.

“My siblings and I grew up not with comic books, but a collection of art, architecture and interior design books, which were always accessible on my parents’ coffee table. My father is an architect and my mother is also an interior designer, both of them modernists. We were very familiar with Billy Baldwin and it made ‘Full Gallop’ so much fun. We were on the same page right from the start and understood the era well. I had no doubt my brother would make it all work.”