David Batchelor is back in Manila | Inquirer Lifestyle ❮ ❯ 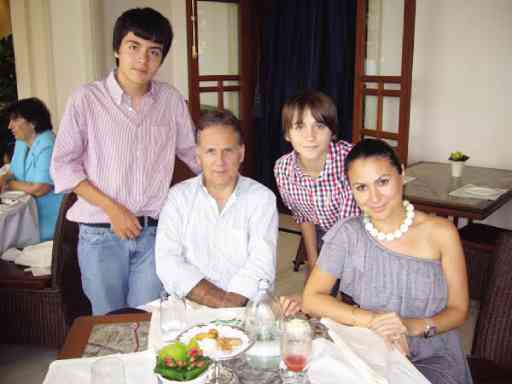 DAVID and Marilu Batchelor with sons James and William

David Batchelor is back in Manila

In the local hotel industry, David Batchelor is a familiar figure, one that until a couple of years ago was connected to an international hotel chain. Although he requested that focus not be placed on the almost 20 years he spent with the Peninsula Group in Manila, Hong Kong and Shanghai, it still bears mentioning.

Now, he is the managing director of Raffles and Fairmont Hotels Makati, the newest property to open in the Makati CBD.

“When my family and I returned to the Philippines in 2012, I was already semiretired. My wife and I were just planning to go into consultancy work so it was a really pleasant surprise to be approached to join Raffles and Fairmont,” he said.

Batchelor said the fact that the hotel is the newest on the block is a bonus as well as a challenge. “Since it’s a new property, the rooms are new, they smell clean. Our facilities and amenities are topnotch as well,” he said.

There are three entities in one complex. Fairmont, which caters to businessmen, has 280 rooms while Raffles, which is geared toward families and weekend travelers, has 32 suites. The third component consists of the 237 Raffles residences.

“We market the Fairmont guest rooms and Raffles suites on a daily basis—not so much the residences.”

The F&B outlets are Spectrum, which offers all-day dining options; Café Macaron, which has sandwiches and pastries; Long Bar, featuring creative liquid concoctions including the Singapore Sling; and Writers Bar, which offers a respite from the bustling city.

Batchelor, however, is particularly proud of the hotel staff whose average age is 27.

“Fairmont puts a lot of emphasis on HR. We hire for talent, train for skill. It’s an arduous recruitment process because we want to bring in the right people.” 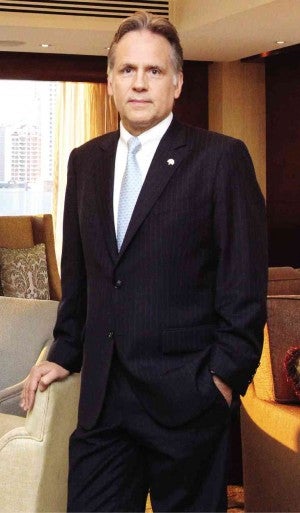 So far, so good. Batchelor says there has been positive feedback from online travel sites like Tripadvisor. “Guests like the fact that we are not as impersonal as the bigger hotels; it’s more intimate here.”

Having said that, Batchelor also realizes that their newness might make it difficult for potential corporate clients to choose them over the more established hotels, especially if they’ve been staying at these hotels for years.

“It takes a while for a new hotel to achieve a stabilized level of occupancy. If we do the small things right, we will do very well here. The staff is trained to look after the guests, the guests notice and appreciate that,” Batchelor said.

“Most of the staff is under 30 and I notice that they’re more enthusiastic, more engaged,” he added.

“The fact that Filipinos speak English is a big plus. They present very well. The girls are generally very pretty and the boys are pleasant. They generally tend to be upbeat, and that makes them nice to work with.”

Batchelor’s longer-term objective, however, is for Raffles and Fairmont to become the top two hotels in the country.

“The challenge is to establish ourselves in what is a very competitive marketplace. Service and product are the keys. If someone tries us, we think there’s a good chance they won’t go back to where they stayed before,” he said.