One and all | Inquirer Lifestyle ❮ ❯ 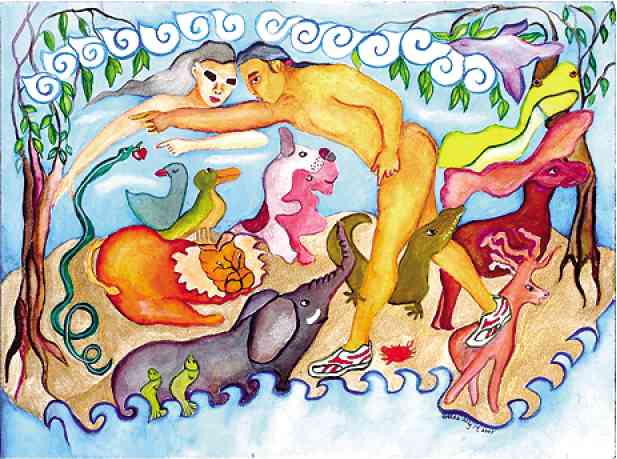 It is said that each age and each society creates its own God. No one ever entirely agrees with anybody else on what He/She/It is. And how this has sparked personal, as well as worldwide, big and little wars!

I didn’t realize how much my notion of God had changed from my Catholic school’s upbringing of God-the-Father-in-Heaven-and-me-the-unworthy-speck-of-dust. Until one day when I felt I had received more than my share of good fortune all week.

Spontaneously, I flung up my arms in a grandiose gesture of gratitude and reverence. Yes, thank you, God, the Creator, for Your generosity! But who was God the Creator? Was He/She/It still the same God who created me on the sixth day?

Then it struck me that I had long believed that God was not only one personality but a composite, an entity of many! (Polytheism, pantheism, animism, what would religious others label it?) The beings who constituted my God are of several levels.

The three most significant beings who contributed to the world, I felt, were Jesus Christ, Buddha and Mohammed. They reinforced the sacredness of humanity. I thanked them.

Next I gave tribute to the angels, and the saints of my Catholic girlhood who had been role models to us: St. Theresa of Avila, Hildegard Von Bingen, St. Francis of Assisi… Also their once living or still living counterparts like Mother Teresa, Pope Francis, Gandhi…

As I walked back and forth, meditating in the garden, I realized that the contemporary philosophers and mystics were also part of my notion of God—Joseph Campbell, Deepak Chopra, Neale Donald Walsch, Ken Wilber.

They and many more were the spiritual teachers who had clarified life paths for us. Surely they were part of the entity called God?

I remembered the departed people who had loved us. Because they never stop loving us and helping us even in their spirit state. Surely they are in the one-God?

And the working living are part of the entirety, too, aren’t they? The teachers, the doctors, the lawmakers, the soldiers, the healers, the artists, the trailblazers, the waiters, the salesgirls, the servants—anyone who had been of service and touched our lives.

And, being an artist, am I not God, too? I smiled, remembering how violently a religious friend of mine had objected to being classified as God. It’s blasphemy, she said.

But if you believe in the one-ness of God, then excluding yourself from the whole is not possible, I said. Of course I believe in oneness, she swore, but I am just not God, not me!

And we are creators! It is the one divine thing that humans can do. We create art, music, dance, drama. We can recreate ourselves, recreate society, change the world! (If only we had the guts.)

These were my thoughts on who God was as I walked slowly back and forth. The sum of all there is, is what makes the world go round. Include the invisibles, the nature spirits that protect the environment—welcome, elves and encantos, fairies, kapre, tikbalang, nuno sa punso! Welcome, places that you live in—mountains, volcanoes, forests, waterfalls, rivers, ravines, soil, sea…

Across my path ambled my old cat. As I stooped to pat her, I knew she was God, too, as were the birds and the crickets that had begun to sing and the frogs and the butterflies and the fish in the pond—all creatures that walked or crawled or flew or swam. The trees, the greenery and the flowers that gave us such pleasure.

Then, horrors! Out of a pile of rotting leaves crawled a shiny cockroach! You, too? Difficult to accept. But I guess, yes.

All was one. Me and the forest, the Mayon and the Everest, the waterfalls and raging volcano, the dying river, a destructive typhoon, the joy of people celebrating, the cry of a man whose child had died, the breeze on my face, my wound, my aching back, the sunset, the moon, the stars, the unseen other planets. Whatever you do or wish on them affects you and them.

Of course I wanted an intelligent priest to assure me I wasn’t some apostate. I found one. He said it is the realization that one reaches during deep meditation that boundaries melt, that there are no fences, no divisions, no distinctions, that all is one.

Review of the day

Today I am in receipt of a tray of purple macopas—beautiful and large (each fruit about 2.5 to 3 inches tall), sweet and succulent. Not at all the ordinary, flat-tasting pink variety with a large cavity inside. The violet macopas are full of flesh, no hollows, and delicious! Delicious!

Sent by Clara Reyes Lapus, the fruits are the impressive result of Mama Sita Foundation’s newest field experiment of which she is the president. What a pity I can’t stick anything in the ground that will grow because what Mama Sita sells are cultivars, not the delicious purple fruits.

But violet macopas will surely interest genuine cultivators who will stick them in the earth and make them bloom and fruit in commercial quantity, until they are available to ungifted but appreciative folks like us.

Found on the last day

I was so lucky to catch the last day of Dulaang UP’s “Mahabharata: Ang Nawalang Kapatid.” I was so wary about watching such a complicated and important epic—Indian at that—which I was expected to understand. I should have known better.

With book and lyrics by Floy Quintos, direction and choreography by Dexter Santos and costumes by Gino Gonzalez, the staging made the story come out as clear as a mirror. And nothing less than great! It was fascinating and magical!

There’s a repeat in July, I’m told. Make sure you catch it!

Two of the young helpers in our compound have their own drama—MGA NAWAWALANG AMA! The beautiful cook of Mol next door bore a child but, before she gave birth, the husband left her for another woman. (“Nangapitbahay,” was how she called it).

Thus the husband never saw the child, now a vivacious and very lovable 14-year-old girl.  But this summer the kid came to Manila to visit her cook mother. She wanted to meet the father she had never seen. The father heard about it and wanted to see his daughter, too.

I told the cook mother that father and child could just meet in our shared garden in the compound.

But the mother would have none of it; she refused to see the lousy deserter. She made her child stand outside our gate so the father could meet her there.

He did finally locate our house and the child and brought her to Jollibee and it was a happy meeting.

The father has asked to see the child a second time for another treat and that sounds pretty good.

The other maid here, 22, also has a never-found father. She just tries to make a joke of it, saying maybe it’s the taong grasa lying on the sidewalk who is her lost papa. It is heartbreaking.

How easily so many irresponsible Filipino fathers abandon existing family only to create a new one. And the wives, often of little education, struggle to support the children as hardworking maids. Thank God that sometimes all’s well that didn’t end up so well.