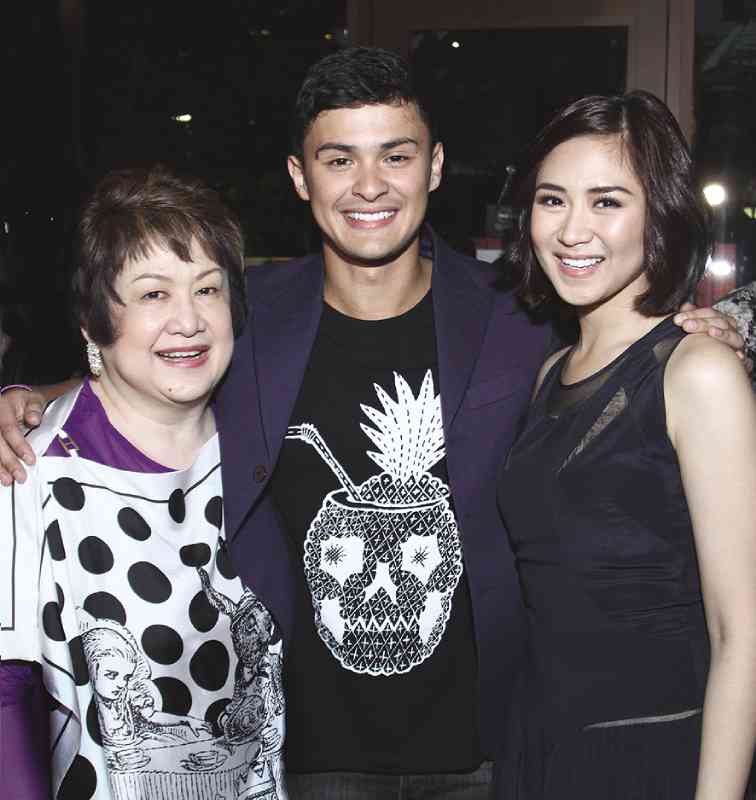 Gold is the new black! Gold is also the color of summer heat. And “Gold” is the title of the top hit song of the ’80s band Spandau Ballet.

For my summer sizzling look, I chose gold and turned to sexy designer Charina Sarte for her figure-hugging and flattering creations that are truly head-turners. She made me a metallic-gold dress that I wore to the recent Spandau Ballet concert at Solaire Resort and Casino. 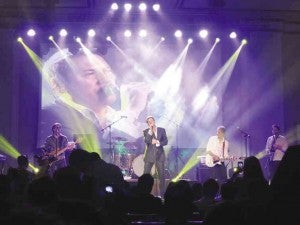 Being an ’80s girl, I can recall having a high school crush on lead singer Tony Hadley. Spandau was one of the leaders of the “new romantic” movement in the early ’80s, and a bunch of my friends joined me to watch the concert, including Tatler editor Anton San Diego and eventologist Tim Yap.

A big thanks to Solaire’s Joy Wassmer, who got us great seats and a backstage visit with Tony himself.

Before the concert, we dined at Finestra, the fine-dining Italian restaurant that serves wonderful pasta and pizza. The delicious and exquisite dishes are created with the highest quality ingredients flown in from Italy. Chef Salvatore de Vincentis, who has won many awards, is the main boss in the kitchen and comes up with exciting Italian dishes all the time.

Solaire Resort & Casino is now a year old. Time flies and it is hard to believe it’s been a year since it opened its doors with the ribbon-cutting led by President Aquino himself.

After the concert, I went straight to Matteo Guidicelli’s birthday bash, hosted by Swatch, at Tipsy Pig Gastrobar in Pasig. Matteo is Swatch’s youngest and longest-serving ambassador. He has been with Swatch for 10 years. Swatch has thrown parties for Matteo since he was 14, and now for his 24th birthday, the bash was awesome and memorable. 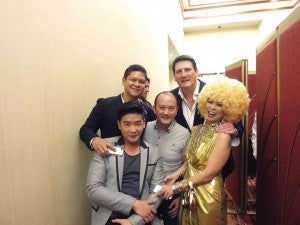 till dressed up in gold and an Afro wig, I walked the red carpet rolled out for Matteo and his guests. At the entrance, we were given “Here for MATT!” baller bands, the night’s access pass and a true statement for being there.

There were two photo spots at the venue. One was a beautiful, intricately carved frame chair made by Maze Furniture. We all took selfies around the chair. Those interested in it can call Judith Manarang at 0918-9133313 or e-mail [email protected]

The other photo spot was a Happy Birthday Matteo wall, propped up with super­sized Matteo head posters.

The place was already packed when I got there. Matteo’s family and friends from school, show biz, triathlon, racing and from all his other activities, who have  always been there for him, were all in attendance and had outpouring love for the birthday boy.

His ladylove, Sarah Geronimo, was also there and was treated like a little princess by Virgie Ramos. She looked so pretty and chic in a Victoria Beckham dress from Tita Virgie. Thanks also to Jappy Gonzalez of Univers and Homme et Femme.

People were drinking, dancing, singing and partying the night away. There were free-flowing drinks from the bar, a buffet spread of Tipsy Pig specialties and special birthday cakes for Matteo. 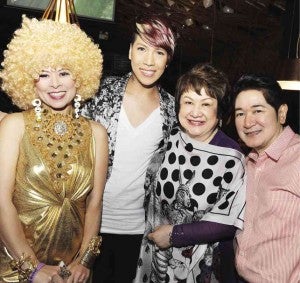 Rico Puno was one of the guests, singing “Just Once,” and showing that no one does karaoke better. Also hyping up the crowd were Randy Santiago singing “Tuloy Pa Rin Ako” and Christian Bautista and Vice Ganda doing a duet, “Please Be Careful with My Heart,” assisted by Richard “Sir Chief” Yap.

At midnight, it was back to a Happy Birthday song, but this time, it was for birthday celebrant and musical director Marvin Querido, who was also playing keyboards that night. Matteo, together with all the singers in the house, surprised Marvin with a yummy Costa Brava cake decked out in musical notes.

Christian Bautista and Cris Villonco also sang “Unchained Melody,” perfectly timed for their roles in “Ghost The Musical,” which opens April 25 and runs until May 11 at the RCBC Plaza.

Of course, the highlight of the night was Matteo and Sarah singing “All of Me,” delighting the entire crowd.

At the party, I chatted with Matteo’s father Gianluca Guidicelli, who recently finished his first full Ironman race in Melbourne together with lots of Filipinos and fellow Cebuanos like Jane-Jane Ong. The stories of the finishers are amazing.

My running buddy Raeanna Cranbourne told me that she had to intensely train and intently watch her nutrition intake. Good thing I recently discovered the Samsung Smart oven for my healthy eating lifestyle.

Technology is ever evolving, but it has always been aimed at aiding everyday tasks. Samsung has taken on the higher pursuit of offering people a better lifestyle. Thus, armed with state-of-the-art electronics and a passion for innovation, the brand recently launched its new lineup of digital household appliances that will ensure we all have a happy home.

The Samsung Smart Oven includes features such as auto-cook for preprogrammed recipes like yogurt-making, dough proofing, and “Slim Fry” function. “Slim Fry” is what differentiates this from the typical microwave oven. Preparing meals no longer has to be an unhealthy experience, since this function cooks food to a crisp without any oil.

The Smart Oven also has other smart features like premium sensors that allow it to identify a food’s surface temperature. Thus, whether food is frozen, chilled or fresh, the Smart Oven can adjust its heat accordingly and food is never over- or undercooked.

Other new Samsung smart appliances include the new Smart Air-Conditioner, the new Food Showcase Refrigerator, and the Front Load Washing Machine with Eco-Bubble Technology. All Samsung appliances are outfitted with the Digital Inverter Technology, guaranteeing efficiency and cost-effectiveness.

On a final note, let me wish my fellow columnist and travel buddy Pepper Teehankee a happy birthday tomorrow, April 14.