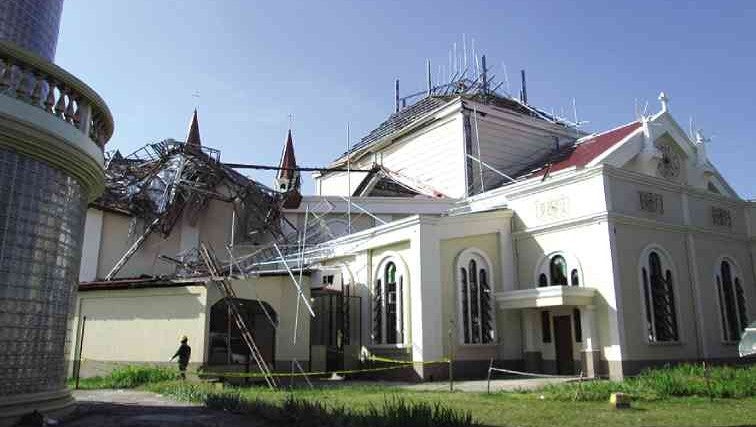 They faced the unspeakable, but they were not afraid to speak about it.

Amid a plain of bald coconut trees that was once a lush forest, artists mostly from Tacloban and neighboring towns used various media to express their grief over the disaster that Super Typhoon “Yolanda” (international name: Haiyan) brought to their province.

For instance, UP Tacloban professor and painter Dulz Cuna told the story of how her house was looted.

“[The looters] did not know how expensive my art materials were. At the door of my house, they painted ‘NILOOTING’ (this was looted),” Cuna said.

“Our objective was to support the artists—and one way of supporting them is to make them work again,” artist and CVA member Joey Tanedo said. “[The disaster] caused a big depression in them. Perhaps forging solidarity with them would help them get up again.”

The interactive art-making enabled the artists to pour out their grief and console one another.

Three canvases—around 1 x 3 meters each—was laid out in the hall, and art materials were distributed. Any artist, regardless of origin, could come to the canvas and paint what he or she felt about the disaster.

Rizal-based artist and CVA head Nemiranda set the pace by breaking open a canister of paint and dancing around the canvas, allowing some of the paint to spill down. Artists immediately followed suit.

The resulting mural was considered a covenant of hope between all the artists involved; it was largely abstract and used various colors.

Yet another mural had a certain sense of chaos, but its madness had a method to it.

Jun Amanto from Osaka, Japan, also performed an Oriental dance. Dressed in an undone kimono, a Southeast Asian tribal vest, balloon pants and head scarf, he danced around to the beat of drums.

Meanwhile, local children under the care of the United Nations Children’s Fund (Unicef) took part in an art therapy session.

Facilitators used the quintessential metaphor of the resilient bamboo to get their point through to the children. In effect, the children were urged to stand strong and weather the storm.

Later on the artists gave the children a workshop on color etching. Children were asked to use crayons to rigorously fill a page with all the colors they liked. Chinese ink was then splashed on the page and allowed to dry.

Using pencils, the children etched out the ink, revealing the colors that were covered by it—another way of saying that beneath all that gloom are colors of vitality and hope.

“It’s good healing for the children,” said Nemiranda about the workshop.

Maulid Warfa, Unicef chief of field office, agreed. He said art is a powerful tool that can help communities and children recover from their painful experiences.