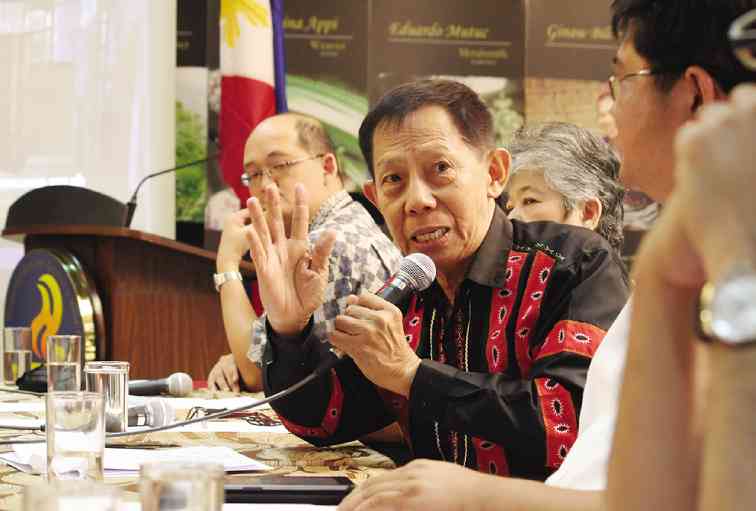 The head of the National Commission for Culture and the Arts (NCCA) has asked policy-makers for support for the agency’s cultural development plan that would promote local creativity and boost tourism as an avenue for economic development.

NCCA chairman Felipe de Leon Jr. made the appeal during the press briefing on the commission’s activities lined up for the Taoid Heritage Program Celebration as part of activities in the observance of May as National Heritage Month.

Taoid, the Ilocano term for “heritage,” is the flagship program of the NCCA’s subcommission on cultural heritage (SCH) led by Commissioner Fr. Harold Rentoria, OSA.

At the news conference, De Leon noted that creative industries in other countries have helped propel economic development.

Spain, China and Japan, for example, lure millions of tourists because of their cultural treasures, he noted.

The Philippines, replete with local customs and cultural traditions, can easily swing the attention of travelers. The problem is helping local communities become more aggressive in attracting people to their crafts.

Father Rentoria’s subcommission plans to focus on cultural mapping, which would involve initially the recording of local practices and heritage in specific areas including those named in the Taoid program.

Albay, Masbate and Sorsogon (AlMaSor) will be the principal venue of the heritage month celebration from May 1 to 4.

On May 1, the Run for Heritage in Albay will stretch from the Cagsawa ruins in Legazpi City to Daraga Church.

A motorcade will go around Sorsogon on May 2 and will pass heritage structures, followed by an ocular inspection of these by Rentoria’s group and a cultural presentation at the capitol building.

On May 4, Rentoria et al will again conduct ocular inspections and technical assessments of heritage houses in Masbate.

De Leon noted in Filipino that local authorities are wont to dismiss their indigenous art like weaving and crafts “because the art taught in school is exclusive to painting, opera and ballet.”

De Leon urged Department of Tourism Secretary Mon Jimenez to expand DOT’s promotion of the Philippines to include local traditions instead of limiting the focus on beaches and resorts.

De Leon said that if apple picking or chestnut baking in the US could be developed as tourist attractions, the country also has a treasure trove of unique skills that tourists could watch.

The cooking of cashew nuts in Palawan, for example, involves highly developed skills since the acidic fruit could injure workers if mishandled, he noted.

In Bohol, the making of local chocolate called tablea could also lure tourists interested in how it is done.

“This is how pride of place is developed, by paying attention to cultural icons, heritage both in the tangible and the intangible levels,” De Leon said.