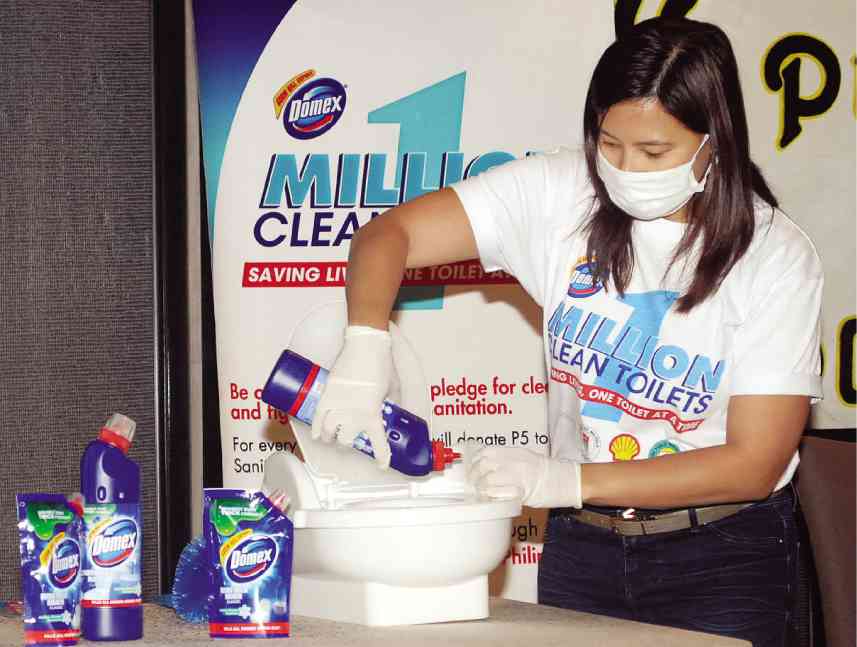 We’ve all been there, when we had to rush to the public toilet with a full bladder, only to be repulsed by the restroom’s unsanitary condition. Every day, a hapless Filipino encounters reeking toilets with dirty tiles, overflowing trash bins and soiled seats.

For a race that prides itself in being clean, with most Filipinos taking a shower at least twice a day, many also apparently take for granted the toilet. According to a study conducted by Unilever Philippines, 90 percent of households do not practice proper toilet hygiene and sanitation.

When probed under a black light, toilets surfaces show that millions of microorganisms—bacteria, germs, molds and other contaminants—flourish in this environment. This poses a higher risk for diarrhea, the world’s fourth leading cause of death in children under 5 years old, and also worms, pneumonia and other water-borne diseases.

“The rate of diarrhea is going down because we have better medicines. But the rate of people contracting diarrhea is going up because sanitation is not improving,” said Chito Macapagal, VP for corporate affairs, Unilever Philippines, during the recent Bulong Pulungan at Sofitel Philippine Plaza.

Furthermore, 26 million Filipinos do not have access to sanitary toilets, and 7.4 million openly defecate—sometimes near a water source, which helps diseases spread even more quickly. It takes only two to three people openly defecating to contaminate 30 to 50 sitios, said Unicef water sanitation and hygiene specialist Dr. Mike Gnilo.

“Sometimes you have to shock people to move them toward collective action. Flies will go from waste to food and back. [Facilitators for our program Philippine Community Approaches to Total Sanitation] tell participants, ‘I don’t want to eat your sh-t,’” he said.

The movement has three objectives: create awareness of proper toilet hygiene and sanitation; educate people on the proper way of cleaning their toilets, and reduce the incidence of diseases related to unsanitary toilet practices.

To support the movement, the public is encouraged to visit the Domex Philippines Facebook page, and click on the app to pledge their support. For every pledge, Unilever will donate P5 to the Unicef sanitation program. Another 5 percent of the proceeds from purchased Domex products will also go to the program.

Starting Thursday, a Domex crew will begin its rounds of cleaning Shell gas station restrooms along NLEx/SLEx for the entire summer. In addition, there will also be clean restrooms in all Max’s Restaurant outlets. Partnerships with other dining establishments and tie-ups with hospitals are also in the works.

“Consumers today use proxy products, like thin bleach used for clothes, to clean their toilets. But these do not work in eliminating contaminants,” said Jay Go, marketing director of Unilever Home Care.

Go said consumers must use products specifically formulated for the toilet, as these are designed to eliminate bacteria for up to seven flushes. Daily cleaning is ideal. Close the toilet lid when flushing, since the mist created by the swirling water is enough to spread bacteria within the area—and will stick on your soap, toothbrush and other toiletries.

“Handwashing is the simplest form of improving your health. We know we have to wash our hands before and after eating, or after using the toilet. But why are we not practicing it? Because it has never been translated into a habit,” Macapagal said.

Gnilo said other factors help build a behavior: Higher expectations from society will create pressure for people to conform to higher standards. But as long as people continue to be passive about dirty toilets, hygiene and sanitation will always remain beyond reach.

Accountability, the sense of ownership when one pays a fee to use restrooms, also helps maintain clean toilets.

“Even in public markets, when you have a stake, it works. Toilets are very clean,” Macapagal said.

So far, Unicef has built 4,000 toilets in Cotabato, Masbate and Maguindanao, and another 4,000 for the “Yolanda” victims. Its goal is to build 100,000 toilets by 2016. This will decrease the incidence of defecating in public, an unfortunate social condition that has been increasing for the past 10 years, Gnilo said.

Domex will also continue to conduct activities to educate and train households on proper toilet sanitation throughout the year.