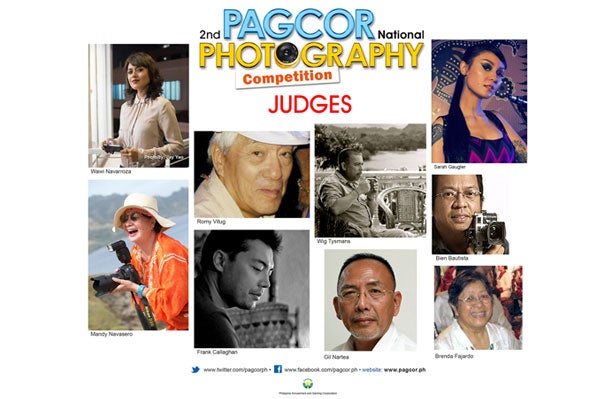 MANILA, Philippines– Some of the country’s top photographers and visual artists have expressed their support for the ongoing 2nd National Photography Competition of the Philippine Amusement and Gaming Corporation (Pagcor) with the theme “Only in the Philippines” that highlights the best assets of the country.

Bautista noted how several Filipinos have nurtured their passion for photography.

“That was very evident when we had our first-ever photography competition last year. We are even more excited this year with the introduction of the new ‘Mobile category,'” she said in a statement Wednesday.

“The advent of camera phones and mobile devices make it easier for any Filipino to take snapshots of sceneries and daily experiences that can only be found in the Philippines,” Bautista added.

For its second photo contest, Pagcor invited the following award-winning photographers and visual artists as judges to ensure that the most deserving entries will win in the nationwide photo competition:

Wig Tysmans, a sought-after corporate, documentary, and advertising photographer whose masterpieces have graced the pages of Manila’s top magazines as well as galleries here and abroad.

Master cinematographer Romy Vitug whose films have won in various movie award-giving bodies like FAMAS (where he was a “Hall of Fame” awardee) and Gawad Urian.

Seasoned photojournalist Gil Nartea who is presently the chief photographer of the Office of the President, Malacañang. He previously worked for the Manila Bureau of Agence France Presse (AFP), Journal Group of Publications, ABS-CBN Publishing, The Manila Chronicle, and Sun Star Manila. He has also spent 15 years teaching Photojournalism in UP Diliman.

Frank Callaghan is an English-Filipino photographer known for his large-format night-time landscapes.  He has had six solo exhibitions, two of which were shortlisted for Ateneo Art Awards.  His work has been shown in Hong Kong, Singapore, Japan, Malaysia, Indonesia and the United States.

Photography and Public Relations consultant Mandy Navasero studied BA in Professional Photography and completed her major in Advertising and Illustrative Photography in Santa Barbara, CA, USA. She has been conducting the Batanes and Soccsksargen Photo Safari workshops to share her passion and knowledge with photography enthusiasts.

Filipino-American visual artist, musician, model and film artist Sarah Gaugler is well known as the vocalist of Philippine-based Electronic Rock Band Turbo Goth and for her unique and delicate artworks. Her band is the official Philippine delegate to the recently concluded SXSW: South by Southwest Music Festival in Austin, Texas. Last year, she was part of 2 film projects; “The Diplomat Hotel” for Cinemalaya and “Bakit Hindi Ka Crush ng Crush Mo” under Star Cinema.

Bien Bautista, whose expertise in photography ranges from advertising, fashion, industrial, corporate, travel and documentary, has exhibited his works not only in the Philippines but also internationally, specifically in New York, USA and Hong Kong.

Pagcor said professional and amateur photographers may submit their entries online until May 9, 2014.

Aside from cash prizes, Pagcor said the winning photos will also be featured in the agency’s 2015 calendar.