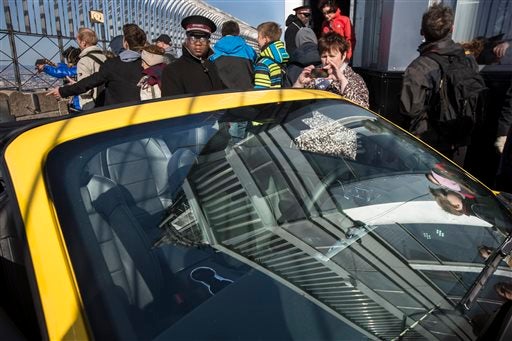 The spire of the Empire State Building is reflected in the windshield of the all-new 2015 Mustang convertible as it's revealed by the Ford Motor Company on the 86th floor observation deck during the New York International Auto Show, Wednesday, April 16, 2014, in New York. AP

NEW YORK — Ford celebrated the 50th birthday of its beloved Mustang by displaying a new model of the convertible on top of the Empire State Building in New York on Wednesday.

The Triple Yellow 2015 Mustang was taken apart, whisked up by elevator to the observation deck and painstakingly reassembled overnight in freezing wind, rain and snow.

More than 1,000 feet (304 meters) above the crowded streets of Manhattan, the observation deck is too high to send the car up by crane and although open air, too narrow for a helicopter drop.

So a team of eight or nine spent more than five hours reassembling the car by hand overnight, battling strong wind on the 86th floor of New York’s second tallest building.

“Zero visibility to start with,” George Samulski, manager of Ford North America design fabrication, told AFP. “It got better as the night went on, but it was bad, it was cold, it was windy.”

By sunrise, the convertible was glittering and the views across Manhattan stunning.

Visitors can admire the car until Thursday. After the deck closes to the public at 2:00 am on Friday, the crew will dismantle the car all over again and remove it.

It is the second time a Ford Mustang has gone on display atop the Empire State Building. The first time was in 1965.

Back then, the Mustang was sliced into three main parts and the windscreen, taken up separately by elevator.

A team of experts came carefully to measure meticulously all the elevators and doors at the Empire State Building, before engineers sat down with a scale model of the new Mustang.

They worked with two prototype body shells. The car that was chosen for New York was stripped down and cleaned to make sure everything looked perfect before it was sectioned and painted.

The second body was used as a test run to determine where to make the cuts, and custom-made rolling carts and wooden crates were produced for each section of the car.

Leaving nothing to chance, a wooden copy of the smallest lift was even recreated, to verify that everything would work.

Each of the loaded carts was also weighed to ensure everything stayed within the weight limits of the elevator and the observation deck.

Once the parts were transported, the final challenge was to assemble the vehicle overnight, outdoors and in just a few hours.

The Empire State Building opens daily to the public from 8:00 am to 2:00 am. The team trained for several days to do the assembly, planning everything down to the minute.

The stunt marks 50 years since US auto giant Ford put the first Mustang on sale during an expo in New York on April 17, 1964.

The 50th birthday will be celebrated in great pomp at the New York International Auto Show from April 18 to 27.

At 50, new-look Mustang still has plenty of muscle