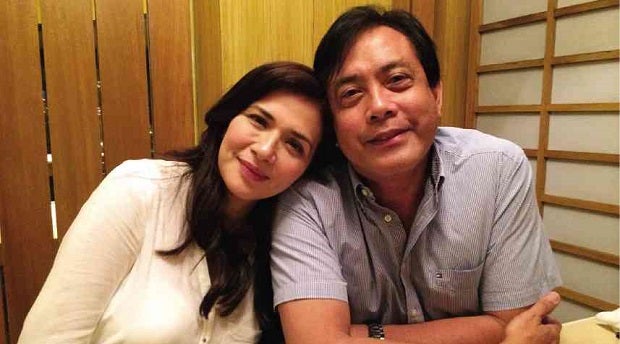 Who is the architect in Zsa Zsa Padilla’s life now? That has been the buzz everywhere for weeks now, especially after she and he were shown on TV, so sweet, watching the Gary V concert last weekend.

For me, the answer came as a surprise, but easily. I only had to ask the architect himself—“That’s you on TV?! You and Zsa Zsa are an item now?”

Yes, Conrad Onglao said, half-amused that I was trying to hone in on a story (at the expense of his privacy).

Better than just getting a candid reply, I had dinner with him and Zsa Zsa last Tuesday, for Conrad is an old friend. They looked so happy together. All these years, I’ve never seen Conrad happier and demonstrative with his feelings. They couldn’t keep their hands off each other.

(Our old private joke goes that I would be his “best man” at his wedding, if ever.)

Zsa Zsa is the beautiful, talented widow whose sad, teary eyes the country cannot forget as it watched her bury her lifelong partner, Dolphy, the comedian/actor/performer, indeed the “institution” who had helped shape Filipino culture since the postwar years.

But she had not been an idle widow the past two years. Even long before she and Dolphy got together, a move that literally stopped the press more than two decades ago, Zsa Zsa was already a Filipino talent in her own right, having recorded songs that have become classics, and acted on TV and the movies.

The past two years of her widowhood, her career didn’t skip a beat, either. She’s been busy.

However, she’d never been linked or seen with any man since Dolphy’s death—until now.

Even as we stood at the door of Conrad’s beautiful home, ready to step out to dinner, they excitedly shared their story.

They’ve been seeing each other for a month now, Conrad said. “A month and 15 days,” Zsa Zsa corrected him.

It all started when megastar Sharon Cuneta, whose house Conrad is designing and building, asked the architect if she could set him up with her friend; Sharon didn’t say who, at first.

Then Sharon asked her close friend, Zsa Zsa, if she was ready to go out on a date again.

“Yes, I told her, I’m tired of mourning,” Zsa Zsa recalled with a bit of life, but the sadness of the recent years still taking over her gaze.

Curiously, right before Sharon’s text, she had asked Dolphy’s son, Eric Quizon, a renowned actor and director himself, if he could help her stash away Dolphy’s stuff, particularly his clothes and photographs. And there were hundreds and hundreds of photographs, including their travels together. These comprised a rich lifetime of memories.

The task entailed at least two days of crying again over a past life, but Zsa Zsa knew she needed to move on and literally clear her space and open it up to fresh energy, a new life.

A strange coincidence—just about the time Zsa Zsa had finished storing the stuff, she got a text message from Sharon asking if she wanted to meet someone. Sharon forwarded the mobile numbers of the two prospects to each other.

Zsa Zsa and Conrad set their date—a blind date, come to think of it—through text messages. Zsa Zsa didn’t know who Conrad is, except that he is an architect. Conrad didn’t and still doesn’t know show biz. Both move in disparate worlds.

The two agreed to meet up for an early dinner in a Makati restaurant on a Sunday, after Zsa Zsa’s show “Asap.” That dinner stretched to three hours, with the two bidding each other goodbye in the parking lot.

The two don’t even remember much what they talked about—must be what they do, and their respective kids, they said. The next day each one hastened to ask Sharon what one thought of the other.

Sharon told Conrad how Zsa Zsa said she was so comfortable talking to him, but she wasn’t sure if there were “sparks”—but again, Zsa Zsa told Sharon, it seemed he would make a good “best friend.”

The couple now laughs over this recollection.

In fact, what followed was like in the movies. After that first date, they text-messaged each other continuously, met up again after two days, and again—all in a week, until by that weekend, they were photographed at Legaspi market, holding hands. The cat was out of the bag.

“I’ve always believed that if you wanted to know the woman, bring her to the market,” Conrad said. The architect is a good cook, by the way, and loves to cook for friends.

Apparently, Conrad liked it that Zsa Zsa loved that day at the market.

Zsa Zsa became Dolphy’s partner when she was only 25, became some sort of stepmom to his many offspring and took care of him in his ailing years, as the country watched with interest, if not admiration. She and Dolphy were together until his death—a total of 23 years.

Conrad was married to his girlfriend from his college years—he is a UST graduate of Architecture—interior designer Ivy Almario, with whom he has two sons, both young adults now, with the youngest barely out of college.

Conrad and Ivy started together a career in architecture and interior design in Los Angeles, where they lived for many years until they decided to resettle here. Among the first projects of the husband-and-wife team in Manila was the makeover of the Manila Hotel before it was bought by Emilio Yap.

The couple pursued separate but thriving careers shortly after their marriage fell apart. They got their divorce in the US, legal separation here, and church annulment. Ivy is noted for many iconic interior design projects (notably the Romulo restaurants, The Midas Hotel and many other private residences).

Like his ex, Conrad is also an architect/designer of the A-list—Zobels, Concepcions, Tan Caktiong of Jollibee, Robert Coyiuto, among them, and business projects such as those of Ayala (the El Nido luxury resort chain in Palawan, Seda hotel chain) and the Calatagan sprawl of Iñigo and Maricris Zobel.

Ivy has remarried. Conrad has had long-term relationships, but has remained low-key in both his career and private life—until now.

Zsa Zsa didn’t know of Conrad’s credentials until they Googled each other before their blind date. Now, quite impressed with his achievements, she fondly calls him “my rock star.”

“He’s good to me. He treats me well,” said Zsa Zsa when asked what drew her to him.

As Zsa Zsa is unfamiliar with Conrad’s architecture projects, Conrad is almost clueless about her songs.

“Is that really you singing?” he’d sometimes ask Zsa Zsa as they listen to her CD.

“She’s funny, witty, simple and so grounded,” said Conrad of Zsa Zsa. “What I love about her is her simplicity and she’s never full of herself; it’s never it’s-about-me. A sense of selflessness. And we share values when it comes to family, career.”

Perfect timing. This describes how Conrad and Zsa Zsa found each other a month and 15 days ago. 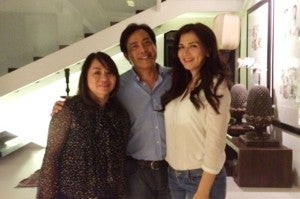 They also felt they wouldn’t have the time or the energy to be playing the field again, so to speak.

“It fits like a glove,” Conrad added about their relationship. “And—Sharon is right—Zsa Zsa looks good even without makeup,” Conrad recalled Sharon’s introduction of her friend via text message.

What Zsa Zsa couldn’t possibly have known, on their first blind date, was that Conrad has been building a dream home the past few years—not a bachelor’s pad, but a four-story glass house he planned to share with a lifetime partner and his two sons.

“Whoever she may be, even if I hadn’t met her yet, I was building this home because I really planned to settle down. I remember telling my friends, including Thelma,” Conrad reminded us of his positive thinking and belief in the institution of marriage.

The house has a roof level where Conrad has his den/office, a gazebo and lounging area, and guest room where his sons can entertain friends. Best of all, it is al fresco and has a beautiful view of the skyline, especially at night.

“In the morning, I still can’t believe how beautiful this house is,” Zsa Zsa said, her hand sweeping the view and stressing again how proud she is of her architect.

For his part, Conrad can’t believe how it is to be pampered by a woman; he’s been living alone, for the most part, for many years now.

“I’m not used to being served coffee, for instance. Or to be asked, ‘want me to pour it for you?’” He’s who’s used to being the one serving breakfast, he said.

In a complementary coincidence, Zsa Zsa is used to looking after her man.

“The simplest things make me happy, like sharing breakfast. Like even if the taping ends at 4 a.m., I don’t mind being up early just for breakfast,” she said.

Both are in the same stage. “The nice thing about getting older is you trust your gut feel,” said Conrad when asked to describe their relationship.

“I am not confrontational. I don’t like arguments. I will just be in one corner,” Zsa Zsa describes her approach to the relationship.

“Just understand the person. When one is in deep thought, okay, I am just in my cave. I’m gonna be patient and respect his space. Just be keen in observing,” Zsa Zsa said.

We learned that whenever she is in Vegas, where her parents and siblings are, she makes it a point to cook for them. And when she’s on concert tour in the US, she still takes the time to cook for them and wash clothes—the diva’s way of staying grounded when she’s away from the glare of show biz.

Conrad once in a while would glance at the tribute tattoo on Zsa Zsa’s wrist, hold her arm up and point to it teasingly—“Lovey,” it said, which was how Dolphy called her. It’s Zsa Zsa’s tribute tattoo to her former life partner.

Conrad also noted how Zsa Zsa would make time to go to Heritage Memorial Park to visit and pray for Dolphy—sometimes before their date.

“The past is past, I am in my present, but that’s been part of my life,” Zsa Zsa said.

That’s true. Conrad and Zsa Zsa are now in a new beginning. A happy Easter.