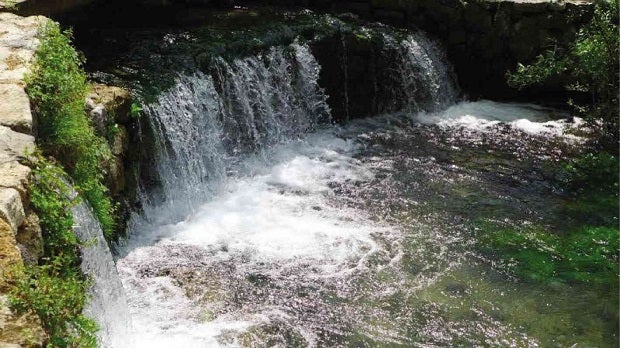 GUSHING waters of Banias, where Peter was named head of the Church

How healing waters accompanied my journey of faith

Water during the hot summer months is a most precious commodity. It quenches thirst. It refreshes. It cleanses. Water has also played a vital part in my pilgrimages with Journeys of Faith. Whether it’s a trip to the Holy Land walking the path of Jesus with Fr. Rene Lopez, or visiting places in Eastern Europe and Marian lands where the Christian faith and first saints thrived, water is ever present.

One of the first sites we visited was Mary’s Well, or the Spring of the Virgin Mary. In ancient times, the site was the sole water source of Nazareth. Today, it is fed by Mary’s Spring, which runs underneath the altar of the nearby Orthodox Church of St. Gabriel. It is believed that Mary drew water from this well, where she also spent moments of discernment after the Angel Gabriel appeared and announced that she would be the Mother of God.

Father Rene, our Holy Land chaplain, asked us to pray here fervently for guidance in our lives.

Another stop was Banias, an archeological site by the ancient city of Caesarea Philippi at the base of Mt. Hermon in the Golan Heights. It used to include a temple, courtyards, grotto and niches for rituals.

This is where Jesus asked his disciples, “Who do you say I am?”—to which Peter replied, “You are the Messiah, the Son of the Living God.” Amid the strong gush of spring water, we reflected on Peter’s confessions and imagined the long, laborious process that formed the foundation of the Church.

My Holy Land group trekked for about 40 minutes across the desert until we reached the River Jordan, or what’s left of it. The sun was scorching and my co-pilgrim Jingjing Romero suffered a bad fall, perhaps due to dizziness from the heat. Good thing she was able to rest a bit near the river. There are two sides of the River Jordan—one bounded by Israel, the other by Jordan which took its name from the river. Soldiers guarded people who lined up to be baptized from either side. A local told me that there were even hidden “snipers,” in case one crossed over the invisible middle line that separated the river.

Curiously, the Israel side looked cleaner. Still, I marveled at the faith of those who bravely waded into it for baptism. My group renewed their baptismal vows in a font beside the river. Jesus began his public ministry after John baptized him in this river. The water from the font was refreshing to the soul.

From praying to singing “This is the day the Lord has made” and “Hava Nagila,” the Jewish traditional folk song in Hebrew, our group’s mood turned into revelry and dancing as we sailed the Sea of Galilee. Father Rene danced gleefully with pilgrims including Romero, Suzette Adriano and Millie Dizon. It was almost sundown when we rode a boat; we marveled at the tranquility of the most famous lake depicted in the Bible.

It was here that Jesus started choosing the Apostles who would accompany him in his mission. It was on a boat like the one we rode from which they caught fish, were thrown about in a storm, and bonded as friends do. During the boat ride in Galilee, I could almost feel time stand still and Bible stories come to life in my heart.

Another stop where water was a moving element was Tabgha on the northwest shore of the Sea of Galilee. Here we found the Church of the Primacy of Peter, a modest Franciscan chapel that commemorates Jesus’ conversation with Peter after breakfast on the shore. The beautiful water also reminded us of the Bible scene when some disciples caught lots of fish after their encounter with Jesus.

I could almost hear Jesus telling Peter, “Feed my sheep…”

It was also a time to remember that there is forgiveness and hope after sin, recalling Peter’s redemption after denying Christ three times.

We watched the frenzied swimming of the fish at the shoreline, remembered the scene of “five loaves and two fish” that fed a multitude, and understood why Jesus chose fishermen as his first Apostles.

One of the must-see places in a Marian pilgrimage is Lourdes. It is a place where you can easily find your way because of the numerous materials available at its local tourism office. Everything is within striking distance: the big cathedral; the baths; the house of Bernadette Soubirous, the girl to whom the Virgin Mary appeared and identified herself as the Immaculate Conception; the grotto where you can haul water to your heart’s content (if your luggage limit permits).

I was awed by the thousands of people walking during the torchlight procession, praying the Hail Mary and singing stanzas of a Marian hymn in one’s own language, their voices resonating in harmony during the “Ave Maria” chorus. Our Marian group had an early-morning Mass led by Fr. Allan Samonte, after which we immediately queued for the baths. It took three hours of praying in line before we entered the baths.

To this day, I could still remember the sense of healing I experienced after being submerged in the cold baths, and how my long hair was totally dry when I left the baths. Peace, healing, grace, blessings pour from God’s heart like the healing waters of Lourdes.

During a Journeys of Faith pilgrimage to Eastern Europe with Fr. Bong Tupino, we were brought to the Church of St. Barbara at the foot of Jasna Gora, Poland. We were told that the spring water that gushes forth is miraculous, sought by pilgrims because of its famous cures for eye diseases. The nun who brought us here said that on a Good Friday night in the 15th century, bandits attacked the sanctuary and seized the image of Our Lady of Czestochowa, hurled it to the ground, cursed the picture, took a sword and struck the right side of Our Lady’s face twice. The bandit was felled by a bolt of lighting. The Paulist friars picked up the holy picture and saw the spring of water that still gushes today.

People won’t survive without water because the body is composed of three-fourths of this liquid. Healing waters from pilgrimages can hopefully quench the thirst of one’s soul. As we continue our journey in this life, we fill ourselves with water, living and sacred—water that calms and soothes, water that refreshes and purifies.