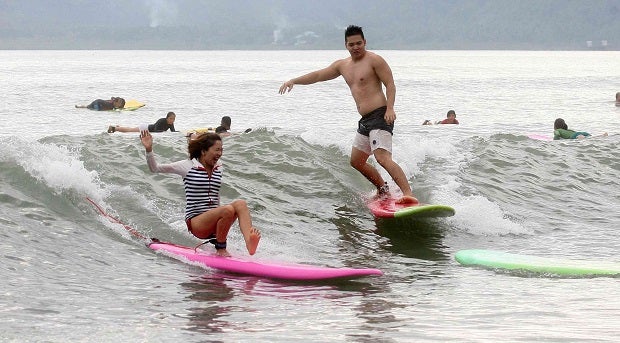 President Quezon was born here–and so was Philippine surfing

BALER, Aurora—It is 7 a.m. on a weekend, and the crashing of sea waves echoes like a siren’s call. Heads bob in and out of the water, with voices shrieking and bodies lying on top of surfboards, arms paddling, eyes darting, waiting for the next big wave.

Watching the surfers—many of them learning the sport for the first time—are groups of friends, couples and families hanging out at the concrete boardwalk fronting Costa Pacifica Raintree, the newest resort here on Sabang Beach.

Welcome to Baler, capital of Aurora province. Historically known as the birthplace of Philippine Commonwealth President Manuel Luis Quezon and his First Lady, Aurora Aragon, Baler has become incidentally more famous in a story that has been retold countless times, but whose importance is still a thrill to hear: filmmaker Francis Ford Coppola went on location here in 1976 to shoot scenes for his war epic “Apocalypse Now.”

The film has been critically acclaimed as one of the greatest of all time.

One of the film’s characters,  Lieutenant Colonel Bill Kilgore (played by Robert Duvall), figures in scenes where he orders his men to surf near Sabang Beach, now called Charlie’s Point, amid gunfire and explosions.

When the film wrapped up shooting, the crew members gave one of their surfboards to the locals as a gesture of goodwill.

The locals learned to surf on their own, and further polished their skills when Japanese surfers conducted a clinic here in the 1980s.

“Baler is the birthplace of Philippine surfing,” declares Charles “Mac” Ritual, a resident of the town who works in the staff of the Aurora provincial tourism office. But of course, he also surfs.

From the terrace of our room in Costa Pacifica, the sight is truly inviting and quite different, even from the country’s other popular beaches. People who go to Sabang and its adjacent areas don’t really swim; they get their kicks by renting surfboards or bringing their own—trying to catch an adrenaline rush which, according to Baler natives like Mac, intensifies as surfers learn to maneuver and navigate the waves.

Costa Pacifica, which opened only last year on Quezon’s birthday, Aug. 19, has lately been fully booked on most weekends. Manager Randy Salvador says the place enjoyed wide media exposure when Kris Aquino featured it recently on her TV show.

Room occupancy, Costa Pacifica PR officer Pettina Cruz attests, has more than doubled since. Management is in the process of adding more to its current 106 rooms.

Costa Pacifica, designed by Ed Calma, attracts families who prefer the exclusivity of a high-end private resort while learning how to surf at its one-stop shop, Charlie Does—whose name is inspired by a line immortalized by Duvall in “Apocalypse Now”: “Charlie can’t surf.”

Guests get the privilege of a free tour around Baler, with a fully trained guide explaining the history and significance of each stop: Baler Church, where the last Spanish soldiers held out after American forces landed in Manila Bay; the respective family homes of Quezon and Aragon as kids; the isolated Dicasalarin Cove; Ermita Hill, which served as refuge to survivors of the great tsunami of 1735; Diguisit Falls, which supplied water to the entire town; and a number of picturesque views of the sea kissing the land.

Costa Pacifica’s main restaurant, dubbed The Beach House, serves varied international and local cuisine; breakfast is the most delectable—Baler longganisa and kesong puti with garlic and other garnishing as the main attractions.

On the last night of our three-day stay, we seek out Edwin Namoro, whom our guide Emerson Mortega says is one of Baler’s pioneer surfers. Turns out that Edwin is a kind of folk hero, a respected elder who operates his own surfing lodge about 50 meters from Costa Pacifica.

While drinking gin, he recalls the story that he has probably told countless times, but which sounds exciting when we hear it: he was only 12 when he first saw the surfboard left by the “Apocalypse Now” crew. Thirteen years later he joined a surfing tournament between Japan and the Philippines in La Union and emerged No. 4 out of 304 competitors—the first Filipino to have done so.

Now 47, he still surfs not to compete, but to chase that natural high that, he says, only a surfer could understand. He just got back from surfing in a nearby island, which he and his friends call “Paraiso,” because there you throw all your cares away.

“Imagine the thrill of learning how to balance yourself on the surfboard for the first time, multiply that 10 times or more as you stay longer in the water without falling. That’s the high we feel,” says Sharon, a woman who joins our conversation. She turns out to be a lawyer who, of course, is also a surfer.

Spending a few hours with Edwin and his friends is so engrossing that we end up treating him to a few beers.

Leaving Costa Pacifica before dawn, we secretly wish we could go back to learn to surf here sometime soon.