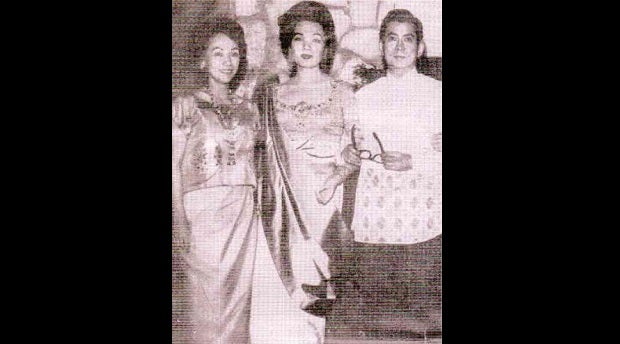 A tale of two Priscillas: my mother Prissy and Chona Recto Kasten

In the silence where God is, I ask, rest and listen.

I was asked recently whether I believe in God, and my emphatic answer was yes, because in my heart of hearts I have accepted that everything that exists in the universe, visible or not, is God. All religions accept that God is everywhere and, therefore, to my mind, everywhere is God.

I do believe that science and religion have already found a common ground to move hand-in-hand. In science, everything in the universe is called energy; in religion, it is called God.

If one accepts the premise that God is everywhere, why then is it difficult for people to accept that God is within each man?

Furthermore, God is in every cell, molecule, atom, proton and neuron of man’s body. This makes him totally God in substance; therefore, he should be called a winner, and not a sinner.

This may sound sacrilegious to some sectors, but they must consider what it does psychologically to a person. Imagine the benefits of believing and accepting that one is a winner, and not a sinner.

Acceptance of this belief empowers, and builds confidence, guiltlessness and enthusiasm to move forward with fortitude and zeal.

I do not deny that man is a sinner, but only to the extent of the original meaning of the word “sin.” You can Google the word, and you will find that it is an old archery term which means “missing the mark.”

We don’t always hit the bull’s-eye in archery or in life, but it surely doesn’t mean that we are bad or evil. It only connotes we should aim again and again until we finally hit the target.

In our youth, we were told that we were bound for hell when we misbehaved. I suggest that parents and teachers just correct children instead of calling them bad or labeling them with negative words. It would make a lot of difference in building their self-confidence, and would lead them to love themselves so they may love others when they mature.

I found it difficult to love myself in my youth because I firmly believed that I was a sinner. I was so into my religion. I went to Mass and communion for seven years every day, without fail. I finally gave up the routine, because it did not bring me happiness like I thought it should.

I had many questions about God and life, and the only answer I ever got was that God worked in mysterious ways.

I did not like the word “mystery.” It sounded more like an excuse. I needed rational explanations, and when I did not get them, I would search for more reasonable answers.

I then found myself in art. I started painting, writing poems and composing songs. I literally began to create the kind of life I wanted. I was making the movie of my life and I was the producer, director, writer and star.

I missed the mark many times, but that did not discourage me. I succeeded in putting up three one-man shows of my painting poems with the sponsorship of Manuel Rodriguez Sr., and had three poetry books published, not to mention an album of the songs I wrote, sung by Asia’s Queen of Song, Pilita Corrales. The world-famous Platters also recorded one of my compositions.

I now head a self-empowerment organization called the Temple of Prayer, Peace and Prosperity, which has adopted a prayer written by Ernest Holmes early in the last century.

A statement of belief

We believe in God, the Living Spirit Almighty. One, Indestructible, Absolute and Self-existing Cause. This One manifests Itself in and through all creation, but is not absorbed by Its creation.

The manifest Universe is the body of God.  It is the logical and necessary outcome of the infinite self-knowingness of God.

We believe in the incarnation of the Spirit in man, and that all men are incarnations of the One Spirit.

We believe in the eternality, the immortality and the continuity of the individual soul, forever and ever expanding.

We believe that the Kingdom of Heaven is within man, and that we experience this Kingdom to the degree that we become conscious of it.

We believe the ultimate goal of life to be a complete emancipation from all discord of every nature, and that this goal is sure to be attained by all.

We believe in the unity of all life and that the highest God and the innermost God is One God. We believe that God is personal to all who feel this indwelling presence.

We believe in the direct revelation of truth through the intuitive and spiritual nature of man, and that any man may become a revealer of truth who lives in close contact with the Indwelling God.

We believe that the Universal Spirit, which is God, operates through the Universal Mind, which is the Law of God, and that we are surrounded by this Creative Mind which receives the direct impression of our thoughts and acts upon it. We believe in the healing of the sick through the power of this Mind.

We believe in the control of conditions through the power of this Mind.

We believe in our own soul, our own spirit and our own destiny…for we understand that the life of man is God.

There will be many more concepts of God that will evolve, and I can see that the God of the future will:

1. Not require anyone to believe in God.

2. Be understood to be without gender, size and color, with no physical traits of an individual human being.

3. Talk to anyone, and be understood to be doing so.

4. Be understood as not being separate from anything.

5. Not be a singular super being but an ordinary process called life.

6. Be understood as unconditionally loving, non-judgmental and non-condemning.

7. Not ask to be served but be a servant to all life.

Happy Easter to all! The God within you has risen to new heights.

One of the most unforgettable experiences of my youth was meeting Don Claro M. Recto. I was in my teens when my father introduced me to the only man in the Philippines that he would describe as great.

My father was always short in praise, so when he praised anyone, I absorbed every word he spoke. I guess my father looked up to Don Claro like a second father, because he was a contemporary of my grandfather Pedro, who was also a senator in that era, but who moved on much earlier.

Recto was an intellectual giant. He was a poet, playwright and essayist of the first caliber. He was called a “lawyer of miracles” as a tribute to his many victories in the judicial court. He would really be aptly described as the finest mind of his generation—a brilliant politician and a great statesman.

Being introduced to him, to me, was like meeting Jose Rizal. Excited and face-to-face with him, all I could say was, “My father says, sir, that you are truly a genius,” and he smiled, almost chuckled and replied, “Yes, young man, but your father tells me that you are the genius.”

I almost choked in disbelief. If that was true and he was not putting me on, it would be the first time my father ever praised me for anything, and through a third person, no less. Of course, after that day, the eminent Recto could do no wrong, by me.

When he ran for President I campaigned for him although I was not yet of voting age. He called on the youth and implored, “Your first task is to participate seriously in the economic development of our country, and to pursue those professions for which there is a great need during an era of rapid industrialization. Only a nationalistic administration can inspire a new idealism in our youth, and with its valid economic program, make our youth respond to the challenging jobs and tasks, demanding the full use of their talents and energies.”

He did not win the election, for his appeal was limited to the intellectual elite, unlike our current President Aquino who shares Recto’s birthday, Feb. 8.

But this I deem they have in common, according to astrologers Goldschneider and Elffers: they both have developed psychic or projective abilities. They are able to form a concept in their minds of how to handle a situation, and bring it to fruition not by physically creating it, but through the power of suggestion—that is, visualizing their wishes and somehow guiding others in that direction.

They also know how to read signs around them, accurately enough to know when it is the right time to raise a subject or make a physical move. P-Noy, I believe, will deliver the matuwid na daan government he promised.

The Rectos’ closeness to our family was further cemented by his daughter Chona, who was born in the same hospital two weeks after my mother.

My grandmother told me that Mrs. Recto occupied the room she had vacated, and that is how I found out how old Chona really was. She would never talk about her age. Chona became known under her married name, Chona Kasten.

Coincidentally, both were formally baptized Priscilla, but she was better known as Chona, and my mother, Prissy.

The serendipity did not end there. Both became fashion icons, occupying the Hall of Fame of Philippine fashion. They not only lived on the same street in Forbes Park, but were also two of National Artist for Fashion Design Ramon Valera’s favorite socialite models.

Speaking of the Ramon Valera, one day I visited him to order a dress to gift my mother on her birthday. I told him I could not possibly afford to pay him in one lump sum, and asked whether he would accept payment in several installments.

He laughed aloud and said, “Hijo, you know how much I love your mother, you can pay me any amount you can afford. It would be my pleasure to design a birthday dress for her.” I was speechless and extremely touched.

Chona and my mother frequently danced the rigodon in the same Malacañang balls and Kahirup celebrations. Also, they both have portraits by Fernando Amorsolo, and finally moved on within a year of each other.

Valera described them as women who “knew how to choose the things to go with their dresses; everything is just right with anything they wear. They do not have to be coached or advised by any couturier about what to wear, and with what accessories. They instinctively know what to pick out.

“They are meticulous about their clothes, from the cloth materials to the smallest stitch in the hemline. They own originals from famous fashion houses in Paris, Italy and the United States. Each one is equipped with a bank account that could easily launch a thousand gowns a year. Both are endowed with good looks and a trim figure.”