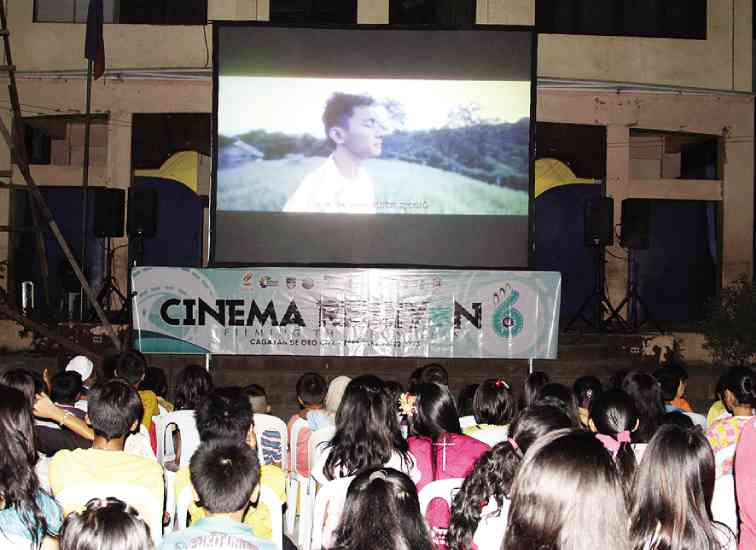 Regional filmmakers kidnapped by the Abu Sayyaf were released at the same time that the Cinema Rehiyon festival was taking place recently in Cagayan de Oro City, whose theme was “Filming the Frontiers.”

That the release came on the last day of the festival illustrated the dangers of filming in the frontiers outside of Manila, but also underscored in a backhanded sort of way the growing influence of nascent filmmaking in the provinces.

Cinema Rehiyon alumna Nadjoua Bansil gained her freedom, along with sister Linda Bansil, on Feb. 22 from the terrorist group Abu Sayyaf. They were abducted June 22 last year in Patikul, Sulu, while shooting a documentary.

“That’s great news for Cinema Rehiyon. She is part of the family,” said Mike Rapatan, head of the Committee on Cinema of the National Commission for Culture and the Arts (NCCA), which organized the regional film festival. “The friendships that you form here make you feel that you are part of, not just the film community, but a film family who all have the same aspiration to be able to contribute in nation building.”

On its sixth year, Cinema Rehiyon showed 14 full-length and 84 short films. Most of the works came from new and young artists.

Cinema Rehiyon is the flagship project of the NCCA for the Philippine Arts Festival.

Mindanao cinema, said Rapatan, has been growing in dynamism. Arnel Mardoquio’s latest full-length movie, “Riddles of My Homecoming,” is a silent film. “Jazz in Love” by Baby Ruth Villarama is a documentary. Shorts lined up were  “Sepulturero” by Jimmy Abayon from Compostela Valley,  “Pattah Ko,” by Kikko Kalabud from Jolo, Sulu, and  “Be,” by Ronald Tamfalan from Sarangani.

Xeph Suarez, a young filmmaker from Zamboanga, said that Mindanao films are very diverse and many of its filmmakers narrate stories that are not commonly told in mainstream cinema.

“Usually when Mindanao is featured on national television, they talk about terrorism,” he said in Filipino. “But there are other good stories aside from that coming from other parts of our region.”

Suarez had two entries in the festival: “Con Enfermedad y Buen Salud,” which he submitted to the Mindanao Film Festival last year, and “Iyo si Malik.”

Veteran filmmakers Peque Gallaga, Lore Reyes and Maryo J. de los Reyes were highlighted the Visayas section of the festival through their films from the Film Development Council of the Philippines’ Sineng Pambansa. Gallaga and Reyes collaborated on “Sonata,” a movie set in Bacolod, while De los Reyes directed “Bamboo Flowers,” a movie set in Bohol and shot there before the earthquake last October.

“(Cinema Rehiyon) is very fruitful in the sense that it helps a lot of would-be filmmakers and we are discovering the different regions,” De los Reyes said. “Making a regional film inspires you and gives you the chance to rediscover the region that you came from.”

Rapatan noted that Cinema Rehiyon had grown since 2009. He said that it used to hold screenings in the small Manuel Conde Theater at the Cultural Center of the Philippines with only about 20 people watching.

“It’s a good sign, it shows that there are more activities in the region,” Rapatan said. “It started as an idea from ‘Ani ng Sining’ (Harvest of the Arts festival of the NCCA during February, the National Arts Month). I gave the structure and Teddy Co did the ground work, and it became what it is right now.”

Co is the vice head of the Cinema Committee and has been  scouting films for Cinema Rehiyon. Last year, he was the curator of the festival’s Luzon section.

Festival director Hobart Savior said that Mindanao has been very prolific and the quality of its films has improved.

Keith Deligero, one of the active filmmakers in the Visayas region and the director of full-length film “Iskalawags,” said that the film scene in the Visayas has also experienced growth.

He added that filmmakers in the region, particularly Cebu, are getting more exposure through festivals and events celebrating regional filmmaking. But Cebu film artists have yet to forge a common identity.

“I can’t think of a perfect adjective to describe the film scene in Cebu because there’s no common genre or statement,” Deligero said in Filipino. “It is somehow diverse and they are using the Visayan language, but I have only seen a few films that are really ‘Bisaya.’”

In Luzon, the most active film community outside of Manila is Pampanga. Nine Pampango movies were shown in Cinema Rehiyon, as well as two movies that were originally shown in the 2013 Cinemanila International Film Festival: Petersen Vargas’ “Coup de Grace” and Carlo Catu’s “Matwang Dalaga.”

The Bicol region is showing signs of growth.

“The film scene in Bicol is flourishing and we are trying to build a community of filmmakers right now,” Yapan said.