‘Imports’ from London, and play of the year | Inquirer Lifestyle ❮ ❯ 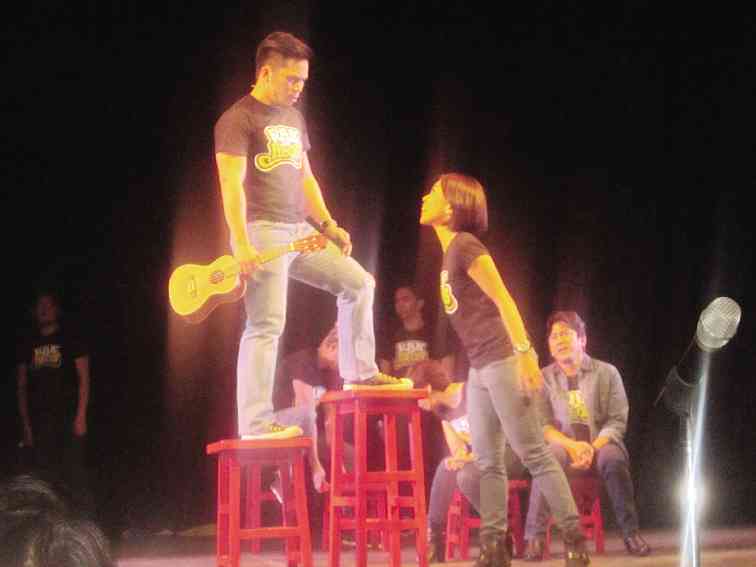 ‘Imports’ from London, and play of the year

The team that was responsible for the hit musical play “Care Divas”—writer Liza Magtoto and director Maribel Legarda—has done it again with “Rak of Aegis” (Philippine Educational Theater Association, at the Peta Theater Center, Quezon City).

Inspired by the music of the pop-rock band Aegis, the plot focused on a low-income community flooded as a result of a new, well-off subdivision. Protagonist Aileen (Aicelle Santos/Joan Bugcat) seeks to help her family and community by becoming a popular You-Tube singer.

Being a Peta play, there were social overtones and environmental concerns. The conflicts seemed a bit contrived, but the overall effect was joyful and feel-good.

The stellar cast was led by Isay Alvarez and Robert Seña. Pepe Herrera as Tolits, one of the boy friends of Aileen, and Nor Domingo as the community developer, stood out because of their comic flair. Herrera knew how to modulate his voice effectively while Domingo did an uproarious macho-gay, song-and-dance number capped by exposing his bra-hugging breast!

But the real star of the show was the “pool of water” set, complete with a boat, designed by Mio Infante.

The sound of lovely, soothing music was heard recently at an unlikely place: the open-air Atrium of the Philippine General Hospital (PGH) on Taft Avenue, Manila. It was the Philippine Philharmonic Orchestra (PPO) under the baton of Olivier Ochanine bringing the healing power of music to cancer patients (and other patients) of the government hospital.

Patients, doctors, nurses, caregivers, visitors and the just plain curious filled the corridors and two floors. Ovation followed ovation at the end of each number. There were Broadway favorites and light classics but the most applauded piece was OPM: the Eraserhead Suite, as arranged for orchestra by Ryan Cayabyab.

The concert was a project of Sining Sigla, an advocacy group headed by director-actor Nick Lizaso.

As usual, Ochanine’s good looks made the ladies swoon. “Ang guapo naman (how handsome),” a woman doctor near me exclaimed involuntarily.

“Ang Nawawalang Kapatid” by Floy Quintos and Ceejay Javier, a musical adaptation of the Indian epic, “the Mahabharata” (Dulaang UP at the Wilfrido Ma. Guerrero Theater) was an in-your-face, overwhelming production. Dexter M. Santos directed with a brio as intoxicating and relentless as the music of Javier, which in keeping with the theme had only a few lyrical moments.

The youthful cast and ensemble of Dulaang UP were frighteningly talented, singing (shouting), emoting (shouting), fighting, doing gymnastics, and dancing up a storm. It was all sound and fury signifying something: the emptiness of defeat, the illusion of victory, and the futility of war.

The ballet scene was enlivened by provocative shows from Ballet Philippines (BP) and Ballet Manila (BM). BP came out with its “Art of Dance,” with matinee shows featuring classical favorites for the family and “adults only” evening performances highlighting modern, sensual numbers.

BM showcased its latest “Ballet and Ballads” series, with top singers West End Mamas & Papas from London led by comebacking soprano Gia Macuja, one of the stars of West End’s “The Lion King.”

The show was an exhilarating brew, contemporary and classical ballet numbers dovetailing with the singing ability of the “imports” from London. Prima ballerina Lisa Macuja in great form after her Swan Song series.

The Mamas and the Papas have attention-calling voices and acting ability, and the women are all Filipinos married to Britons: Gia Macuja and violinist Robert Atchinson, Cez Campos and Nick Bonner, and Maya Barredo and Gerard Duffy.

It was quite a treat hearing the Brits singing in flawless, slightly accented Tagalog during the OPM numbers.

Play of the Year

As the verbally violent matriarch, Baby Barredo gave what will surely be the crowning achievement of her long acting career in Repertory Philippines’ “August: Osage Country” by Tracy Letts (Greenbelt I, OnStage, directed by Chris Millado). And Pinky Amador, as the troubled eldest daughter (actually all the characters—except for the native American girl played by Angeli Bayani—were “troubled”) matched Barredo scene for scene.

“August: Osage Country” is the Rep play of the year. Too early to tell, but it may well be the Play of the Year.