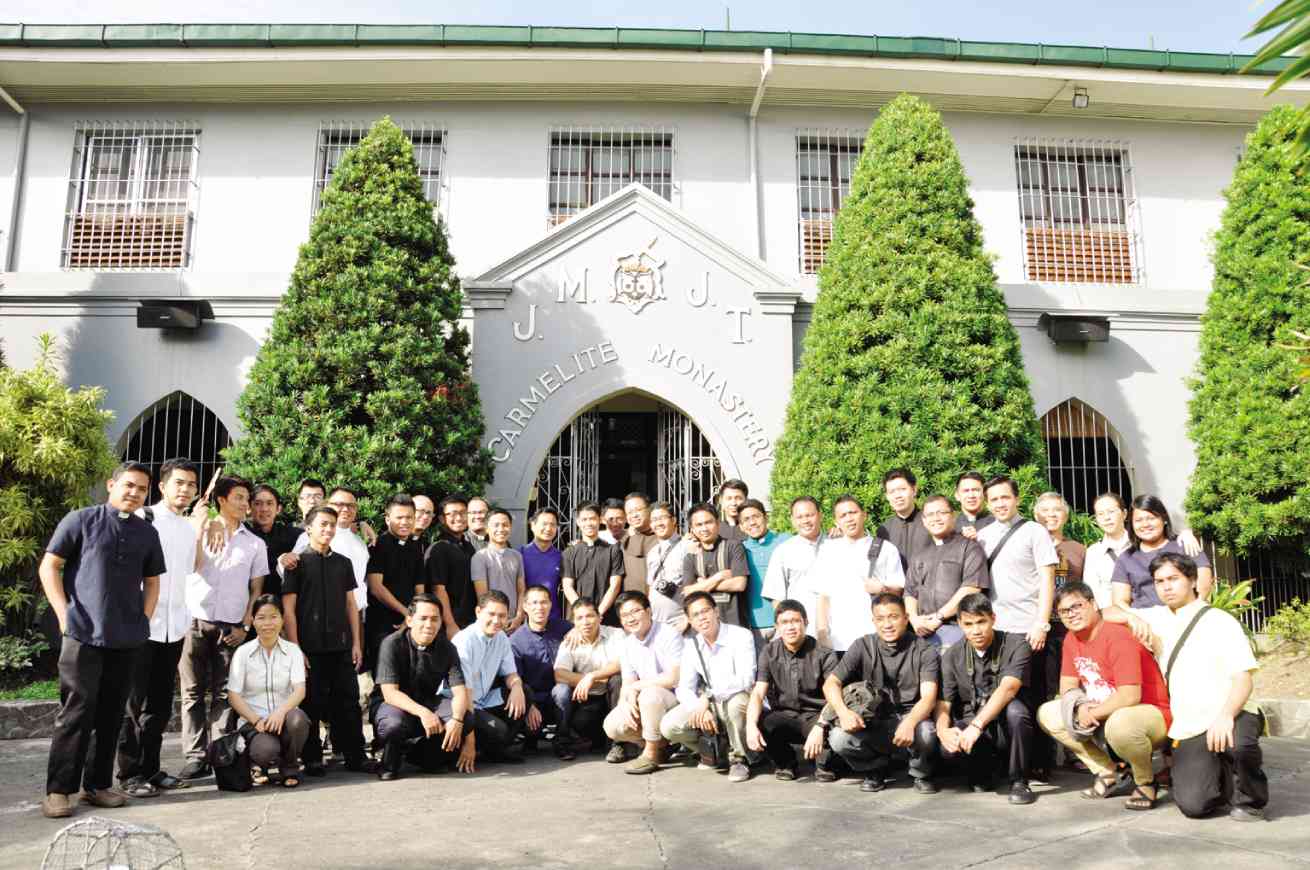 STUDENTS and professor of History 7

For our purposes, our tour was made based on “archeological,” that is, academic and scientific, purposes.

The subject description of History 7, which this writer teaches at the Faculty of Sacred Theology of the University of Santo Tomas, is Christian Archeology.  To be tackled in the course are structures and  “bits and pieces” considered as archeological that belong to the pristine Christian era, the period spanning the 2nd Century AD up to the time of Constantine in the 4th century. The topic does not include Palestine because by scholarly delineation that belongs to Biblical Archeology, which is another course.

In order to make the study more interesting and attuned to concrete experience, I decided that the subject matter cover a much wider field—the cultural heritage of the Church—which,  with the establishment of the Pontifical Commission for Church Cultural Heritage, is now considered by the Church as a contemporary concern.

In fact, the training of seminarians in conservation of the cultural patrimony of the Church highly admonished during the years of their scholastic formation in the Vatican document, Pastor Bonus (art. 103).

For this year, we brought our seminarians and theology students to Cebu. Regalado Jose, UST archivist and former commissioner on heritage of the National Commission for Culture and the Arts, warned the seminarians that it would be a “tour-ture,” meaning that the tour would be information-heavy.

Since it was near the airport, and since it embodied the beginnings of Christianity in the Philippines, first in the itinerary was a visit to Magellan’s monument (though some refer to it as Lapu-Lapu’s victory shrine).

The group also toured select places directly related to the study of Church heritage: the Church of Our Lady of the Rule; the new Shrine of San Pedro Calungsod in the compound of the Archbishop’s palace; the Basilica of the Santo Niño de Cebu, including its museum; Cebu Metropolitan Cathedral; the churches of Carcar, Argao (with its museum), Dalaguete, Boljoon, Oslob, walled ruins of Daan Lungsod of Oslob, Liloan and the Carmelite monastery chapel of Cebu.

The group of Fr. Brian Brigoli, a former student in History 7, published in 2009  the “Balaanong Bahandi: Sacred Treasures of the Archdiocese of Cebu.” It gives a very extensive overview of all the churches, ecclesiastical museums and other interesting church heritage sites of Cebu. With its dramatic and luminous colored photography, the book is a visual feast.

Due to limited time and resources, we were not able to visit even a quarter of all the churches in Cebu. But the seminarians and theology students said they gained a new way of looking into their  gift of faith and a wider perspective on Philippine church cultural heritage.

Seminarians Jaymark Agmata, Francis Bore, Andrew Cortez, Mark Ferrer, and Angeles Gidayawan said they were impressed by the Basilica del Sto. Niño de Cebu. “This site alone offers not only early remains but also a culture that is obviously a product of a long history of devotion to the Sto. Niño The faith that was once formed is now handed on to the next generation.”

“I learned so much from the visit to the different ecclesiastical museums,” said Kimrey Pintor. “They display  the ingenuity of our ancestors. They showcase Cebuanos and Filipinos in general not only as devoted Christians but also as skilled, talented and creative people.”

“Our archeological tour in Cebu is a good avenue in trying to learn the history of Christianity in the Philippines and how it flourished from the 16th century onward,” said Marjun Almario. “The churches and places we visited speak of the richness of Christianity in this land. They are, indeed, real treasures of the Philippine Church. To personally see and touch them was a wonderful experience. It strengthened my faith because their existence is the manifestation of how God has guided our Christian history of this land.

“More than the old structures is  the faith of the people whose great concern now is how to rebuild the house of worship that was devastated by the recent destructive earthquake. The faith of these people is I think the real treasure that should be safeguarded and cared for.”

“There are some things which conservators can change (but) others need to be left alone,”  the group composed of  Whendhel Agad, Joemar Marifosque, Aldin Balquin, Johnny Esmilla, Mark Philip Goroza noted. “The primary question (of intervention) is whether to preserve the original structure or not. In the case of the church in Dalaguete, the wooden ceiling was painted with varnish but the retablo was not changed. In both cases, the original is preserved.”

“These edifices and buildings are structures of the past yet they speak eloquently of who we are as a people,” wrote seminarians Arthur Adricula Jr., Baltazar Acebedo Jr., Jericho Callanga, Loyd Philip Divinagracia, Ervin Ray Garcia, Ranie Laruan. “These structures are monuments of the Christian spirit wanting to express its communion with the Creator.”

A highlight of the tour was meeting Archbishop Jose Palma, himself an alumnus of the UST Ecclesiastical Faculties. “I pray that your visit will be another opportunity for you to appreciate the blessings of the Lord showered on Cebu where faith is considered truly a God’s gift, and where despite the earthquake and typhoon, we still   proclaim that God is good.”

Monsignor Palma was of course making references to the earthquake that hit Cebu last October as well as Supertyphoon “Yolanda” that swept the Visayas the following month. “We can rise from the rubble of the earthquake,” he said. “As we have been saying: No typhoon can blow away our faith and no flood can drown it.”

Of course, a heritage tour of Cebu would not be complete without partaking of the gastronomical patrimony of the island. With relish, the group feasted on Cebu’s specialties such as the popular lechon Cebu, the chicharon, the torta, the hot chocolate, the mangoes, the sinugba and the puso.

Much has been learned and experienced together from the tour. But perhaps the best lesson is  a renewed realization of the vocation the seminarians have been  summoned to. After all, archeology and heritage are not only about the past, but also of the present and of the future.

Fr. Isidro Abaño, OP, is the director of the UST Museum of Arts and Sciences and regent of the UST Faculty of Civil Law.