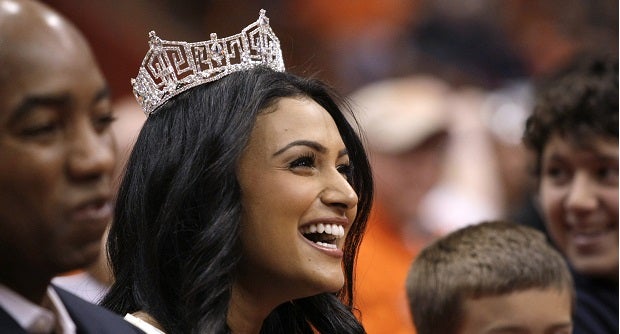 In this Saturday, Feb. 15, 2014, file photo, Miss America 2014 Nina Davuluri attends the NCAA college basketball game between Syracuse and North Carolina State in Syracuse, N.Y. A Pennsylvania high school student is in hot water for asking Davuluri to prom during a question and answer session at school. AP

YORK, Pennsylvania – Miss America is asking a Pennsylvania school district to reconsider the punishment of a high school senior who asked her to be his prom date during the question-and-answer portion of an assembly.

Davuluri said her travel schedule will prevent her from attending the dance with Farves.

School officials knew Farves intended to ask her to prom and warned him not to do it. Fellow students cheered afterward, but Farves was suspended for misbehaving.

He apologized for disrupting Thursday’s event. Davuluri was there to talk about the importance of science, technology, engineering and math studies.