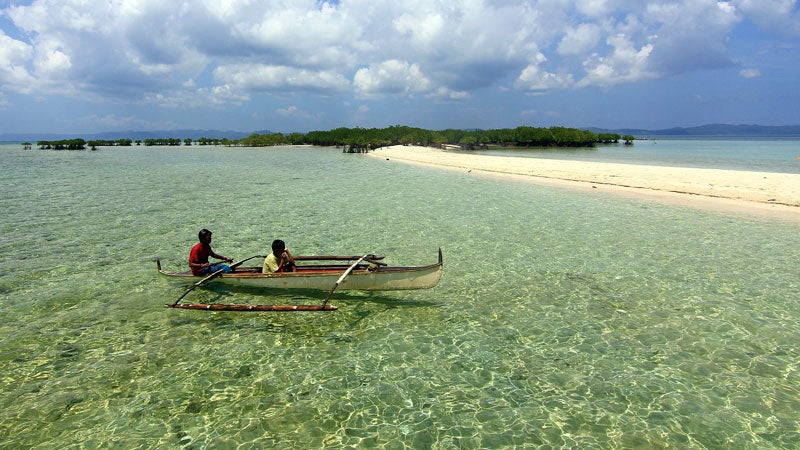 CRYSTAL WATERS OF MASBATE. An outrigger glides on the clear waters just off a sandbar in Masbate City. MARK ALVIC ESPLANA/INQUIRER SOUTHERN LUZON

How to enjoy Buntod

The Buntod day tour is available at P1,400 per person, and includes the boat fare, port fees, guided tour and meals for the entire day.

Those who do not wish to pay for the meal-inclusive tour may opt to rent boats from Masbate City to Buntod islet, at rates ranging from P500 for one to four persons, to P800 for a group of five to 14 people.

For both guided tours and those who go to Buntod on their own, snorkeling with a reef guide is P100 per hour while an underwater camera can be rented for P200. Only certified open-sea scuba divers can avail themselves of the scuba diving equipment, which can be had starting at P200 per hour, said Romeo Soria Jr., president of Samahan ng Mangingisda ng Puro-Sinalikway (Samapusi).

Guests can stay overnight in the cabana for free, although they must bring their own bedding.

Soria said there were plans to reduce the price of the tour package to make it available to more tourists in the coming years. Samapusi and the city government are also in the process of developing the package further to maximize visitors’ enjoyment, he added.

Naga City in Camarines Sur province or Legazpi City in Albay province can be the jump-off points for Luzon residents coming in by bus or plane. From Naga, one can take a 94.5-kilometer van ride to Legazpi. Vans offer a quicker land trip but buses are also available.

From Legazpi, take a van to Pilar, Sorsogon province, a 39.5-km journey that will take you directly to Pilar Port where you can buy tickets for either the fast-craft ferry or the roll-on, roll-off (Ro-Ro) ships.

Fast craft (P308 for economy and P396 for business class) take at least three hours to cross to Masbate, while Ro-Ro ships (P180-P230) take four. Both vessels depart only in the morning, from 1 a.m. to 11 a.m.  Both also dock at the Masbate City Port.

Fast craft and Ro-Ro ships are safer than the smaller motorized boats that also offer transportation from Pilar to Masbate.

From Masbate City Port, a 5.1-km land trip from the city center via tricycle will take you to Rendezvous Resort and Hotel public port where you can take the 15-minute boat ride to Buntod Reef Marine Sanctuary.