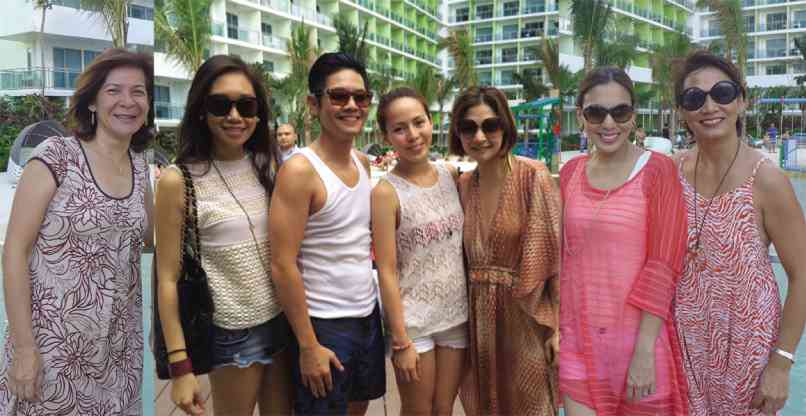 The happening took place at Century Properties’ sprawling, beach-theme development, The Azure Urban Resort Residences. With pristine white sand, a sensational wave pool, and kiddie water playground, guests were transported to a tropical paradise right in the middle of the city, dahlings.

DJs Manolet Dario and Rico Arce provided the rocking soundtrack to the bash, which began après lunch and ended way past sunset.

Drinks came courtesy of Privé; the excellently prepared food was by Andi’s eye-catching mom Rose. There were also yummy bites from Potato Corner, as well as pizza and pasta from Greenwich—of which Andi owns a franchise.

It was a change of pace from the usual swinging parties that GP has at the clubs he co-owns including 71 Gramercy and Privé. “I wanted to do something more wholesome for Andi’s birthday this year,” he said, “something during the day surrounded by family and our close friends. This is just perfect. She deserves nothing less than a memorable and unique birthday bash and I think we pulled it off.”

How to get rid of haggard look

Hunks and beauties gathered recently for the launch of Pond’s Men, a new line of facial cleansers and moisturizers.

The event was held at Whitespace, which was transformed into The Pond’s Men Manor complete with modern-day knights, booze and pool tables.

“Pond’s Men takes out that haggard look which usually happens when I’m in long shoots,” said Lim. “I like how it energizes me even after a long day at work.”

Blanco treated all the guests, including my palangga JR Isaac, Robbie Becroft, Mars Miranda and Felix Roco, to a splendid set of all-original hits, ending with “Your Universe.”

It’s good to know that Pond’s has also turned its attention to men and their own skin needs.

Renowned hair and makeup maven Jing Monis did his own way of launching endorsers of his salon through the event “Pretty Young Thing,” held recently at Vue Bar of The Bellevue Manila in Alabang.

The party was hosted by The Bellevue Hotels and Resorts (BH&R) team led by its chairperson Johnny Chan and marketing and communications corporate director Ryan Chan.

Adding spectacle to the gathering, palangga, were musical performances by Abby Asistio and Mica Javier.

Monis capped the party with a video and brief discussion of his plans. He thanked everyone for supporting his salon.