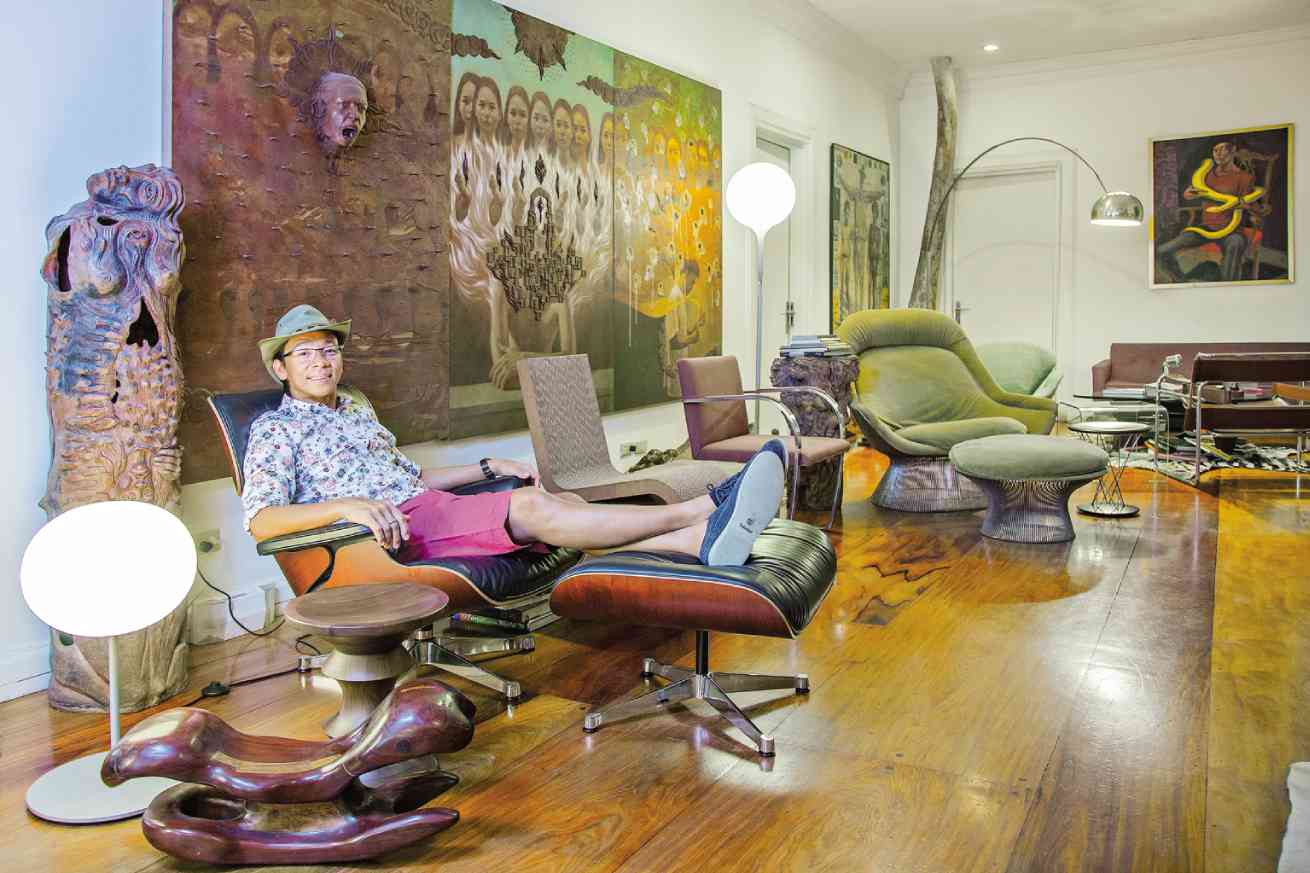 ATIENZA sits on a Charles Eames chair and ottoman, a gift from wife Felicia. In the background is mixed media triptych “Inspirasyon, Pagkaupos, Pagsusuka” by Alfredo Esquillo. PHOTOS BY PJ ENRIQUEZ

Kim Atienza: At home with art and design

The house of TV celebrity and triathlete Kim Atienza is a veritable art gallery: sculptures, murals and artworks compete for attention with the vintage furniture.

It takes a certain chutzpah to pull off this funky and eclectic style. And it all works because Kim and his wife, stockbroker-turned-educator Felicia Hung, are art collectors and design lovers.

Both enjoy sporty and intellectual pursuits as well. Atienza’s interests have ranged from astronomy to crystals, meteorites, scooters and plants. Felicia supports antipoverty programs and the protection of the Philippine eagle; she also appreciates good wine and attends conferences on continuing education.

Both love exotic animals and art.

Living in Malate, Atienza had taken to the bohemian lifestyle of the Manila district. Back then, he would hang out at Penguin, the watering hole for artists and writers. When the artists became his buddies, he would buy their small works, mostly black-and-whites.

Hailing from Bacolod, Charlie Co was a Penguin habitué, and his paintings combined folk art and political statements.

Atienza also befriended the late Santiago Bose, who was like the “rock star of Cordillera artists” and whose tribal-inspired mixed-media works reflected his views on neocolonialism and the gap between the rich and the poor.

One day, Atienza raided the house of Borlongan to select works from the artist’s different periods. The pure abstractions, rendered during the artist’s student days, now pile up in the Atienza living room. They were a far cry from Borlongan’s representational works today for which he’s more known.

Atienza was also attracted to Esquillo’s surrealistic images imbued with strange and angry symbolism. He’s a proud owner as well of Javier’s early works that were marked by bizarre and fragmented juxtapositions of human callousness and stoicism.

“I learned from these artists that art is about life, and life is not always beautiful,” he explains. “Hence, not all art is beautiful. The beauty is sometimes found in things that are ugly. Art has to be truthful.”

Asked if his children were frightened by the dark works, he replies, “They were born to it. They’ve become so accustomed to the images and they were also trained early to appreciate art. All three of them can paint.”

Atienza recalls that in the late ’90s, he was riding around Makati City in his vintage Vespa and went to a restaurant. Spotting Felicia, he knew that something was bound to happen.

“I had read about her,” he says. “She was one of those women to watch.”

He invited her to ride around Makati City on his Vespa. “Twenty minutes into the conversation, we were in love.”

The next day, Felicia left for London to work. Soon they were carrying on a long-distance romance. Upon her return in 2001 for a Merrill Lynch negotiation, they were married.

In the first five years of marriage, they would set aside a portion of their earnings to buy art from upcoming artists.

In 2006, as the family was growing, the Atienzas acquired the residence of the late couturier Jose Salazar. Although they retained the shell and the garden, some walls were knocked down to make it more spacious.

In redecorating the space, they used their well-honed eye for art. Every room has a collection of paintings and vintage furniture pieces that become pegs for the decoration.

The emphasis in the exuberant living room are the spirited colors and bold shapes of  mid-century furniture and the high-contrast tones and striking patterns in the paintings.

When Felicia gifted Kim with a Charles Eames chair and stool, he placed it in the most prominent part of the living room. He could sit on it and enjoy looking at Esquillo’s triptych “Inspirasyon, Pagkaupos, Pagsusuka.” He explains that the work is about the various stages of creation: enthusiasm, burnout and nausea. “When the artist has done too much and he’s had it, he pukes,” Atienza says.

Today, Kim’s art collecting is  no longer focused on the dark side of humanity. Louie Cordero, known for his surreal statements on social history, made a painting of a couple levitating with a heart in space as wedding gift.

As another present, Felicia gave Kim an abstraction of Asian temples by Arturo Luz.

Part of Atienza’s attraction to art was the thrill of chasing a “difficult” artist. For instance, through Kenneth Esguerra, now Ayala Museum director, Atienza met the late sculptor Jerusalino Araos, who was known to be a snob. Still, Atienza managed to have breakfast with the sculptor after the TV emcee’s morning show at ABS-CBN. Araos was delighted with his company that he gave Atienza’s son a  rocking horse sculpture as baptismal gift.

One day, Araos went to Atienza’s house to trade his sculptures and old Land Rover tires  for the celebrity’s new tires.

In the living room, the jagged Cacti sculptures of Julie Lluch and Araos’ sculpted crocodile and human torso blend with the angsty figures of the social-theme dark paintings.

Lluch had given Atienza several of her pieces, among them a bust of the late Salazar. More than 20 years ago, Salazar commissioned his bust. Thinking that he looked too fat, Salazar rejected the piece and he and Lluch had a falling out. The bust remained in her factory until she learned that the Atienzas had bought his property.

When Atienza became a born-again Christian, he had to unload some of the disturbing artworks. Unframed, most of the paintings lean against the wall so that he could rotate the displays. The colors and patterns of the paintings seem to harmonize with the texture and grain of the hardwood tables,  narra flooring and the furniture finishes.

“I’ve toned down,” Atienza says. “Money is sacred. You have to use it correctly. But the money didn’t go to waste because the artworks have become investments.”

Yet, he believes that art is not commodity. He is not selling the works because they will become heirlooms for the next generation.

“I once thought fulfillment in art was deep until I turned to God,” he says. “I realized the real fulfillment is not in collecting but in giving.”