Wanted: Beauty queen with a heart that beats for the environment | Inquirer Lifestyle ❮ ❯ 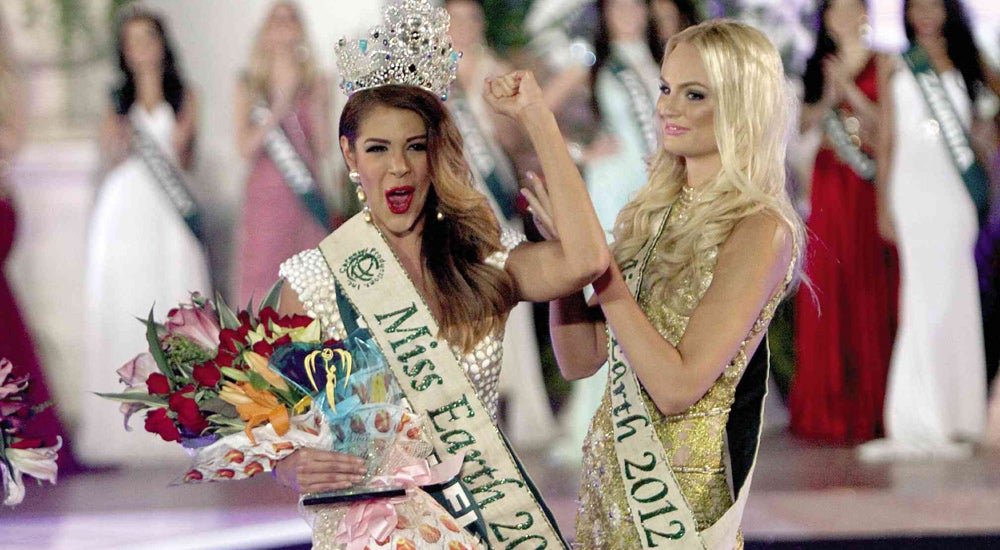 Alyz Henrich of Venezuela celebrates as she is crowned Miss Earth 2013 by Tereza Fajksová, Miss Earth 2012, in a photo taken last year during the beauty pageant’s final night. On Tuesday, 49 delegates to this year’s Miss Philippines-Earth pageant presented themselves to members of the media. RICHARD A. REYES

Wanted: Beauty queen with a heart that beats for the environment

MANILA, Philippines—Greeting spectators “Happy Earth Day!” under the scorching heat of the summer sun, 49 delegates to this year’s Miss Philippines-Earth pageant presented themselves to members of the media at the poolside of the Solaire Resort and Casino in Parañaque City before noon on Tuesday.

Unfazed by the intense mid-day heat, a manifestation of global warming which these ladies aim to combat through advocacy, the representatives from different parts of the country and overseas Filipino communities paraded in their multi-colored, two-piece bathing suits, smiling at every camera lens trained in their direction.

The 14th edition of the annual national beauty pageant attracted a bevy of formidable aspirants, prompting organizers to declare that judges will have a hard time choosing the winner, who will be proclaimed at the coronation ceremonies to be held at the SM Mall of Asia Arena on May 11, at 7 p.m.

“It’s so hard to pick a Top 16. There are years when it was easy to choose, this isn’t one of those years,” Lorraine Schuck, executive vice president of organizer Carousel Productions, told the Philippine Daily Inquirer at the sidelines of the press presentation.

“We are seeing a new breed of young ladies. The judges’ job won’t be easy,” added Schuck, who was also an internationally recognized beauty queen.

Fellow beauty queen Peachy Veneracion, vice president and project director of Carousel, noted an improvement not only in the height and beauty of the aspirants that they have been getting every year.

“The candidates are more aware of the environment because of social media and the Internet, the pageant’s advocacy is really getting to the younger generation,” she explained.

Both Veneracion and Schuck said the pageant would seek an extraordinary woman with credentials going beyond having a beautiful face and an enviable figure.

“We are looking for someone who loves the environment and can become a role model to little kids, to make them aware of taking care of the environment,” shared Veneracion.

She added: “All of the catastrophes happening in the world right now are the result of how we treated Mother Earth. Our winners have helped make people become aware of this. They now know how to dispose of their garbage properly, how to address global warming, and even consider getting energy-efficient refrigerators with inverter technology.”

Shuck put it simply: “The next Miss Philippines-Earth should have a heart for the environment, who will pursue the campaign even after her reign ends.”

The winner will represent the country in the global tilt Miss Earth, the Philippine-based international contest considered as one of the most prestigious competitions by big pageant organizers around the world, including Venezuelan Osmel Souza, national director of the beauty factory of Latin America.

Last year’s Philippine representative, Angelee Claudett delos Reyes, told the Inquirer that she would like to relinquish her title to someone who “is not just beautiful, who not only has a beautiful physique, not just intelligent, but has a good heart.”

She explained: “All of them are beautiful, sexy and intelligent. But it takes a good heart to take care of the environment.”

A very busy year awaits the next Miss Philippines-Earth, according to Delos Reyes, who finished in the Top 8 of the 2013 Miss Earth pageant.

“It’s a lot of hard work in high heels, but a lot of fun, too. She will be busy every day and has to remain beautiful even if she lacks sleep. It’s a true test of grace under pressure, so she has to love what she’s doing,” she told the Inquirer.

Among this year’s delegates are returning aspirants Monique Teruelle Manuel of Dinalupihan, Bataan, and Diane Querrer of Tanauan City, Batangas. Mary Ann Ross Misa and Maria Bianca Paz, runners up of the rival national tilt Miss World Philippines, are also in the fray.

The Philippine Daily Inquirer and Inquirer Libre are official media partners of the 2014 Miss Philippines-Earth pageant.