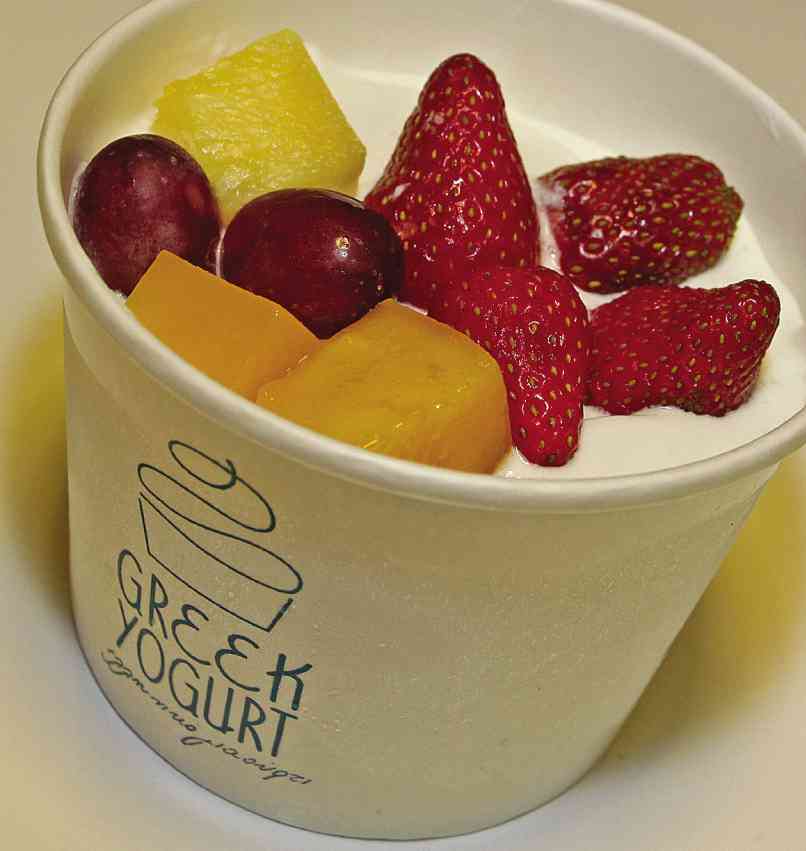 A first in a mall: Authentic Greek yogurt–made fresh in front of diners

Gregory Galanakis says he couldn’t find real, freshly made, Greek-style yogurt for the past 30 years that he’s been doing business in the Philippines, which he considers his home next to his motherland Greece.

He works in the shipping industry that demands shuttling to Manila six to seven times a year, and staying at least 20 days on each visit. Galanakis wanted a taste of Greece here.

A diehard yogurt eater, Galanakis tried several locally available yogurts in the market—but only got frustrated.

“Sorry to say, it’s no yogurt to me,” says Galanakis, who eats yogurt as part of his daily nutrition. He claims that, in Greece, he takes his yogurt at exactly 7 p.m. just before dinnertime.

In Manila he couldn’t get hold of natural, handmade and fresh yogurt the way it’s prepared in Greece and which suited his taste. Greek yogurt is made of pure cow’s milk with a mild tart

flavor, typically sweetened with honey and sprinkled with fruits or nuts.

Galanakis says Greeks consume around four to six ounces of yogurt a day for its health benefits. In Greek hospitals, it’s mandatory for patients to have yogurt every day. It’s prescribed by doctors no matter the patient’s sickness,

Yogurt is said to be a good source of calcium, enriched with vitamins A, D, E and B9, plus iron and probiotics. It also reduces high blood pressure and osteoporosis.

Galanakis felt he had to introduce Filipinos to such a healthy Greek product. So, after a year of studying the market, he opened the first Greek Yogurt store at Century City Mall in Makati City.

Galanakis brought in downsized versions of the typical humongous yogurt production line, including stainless-steel tanks and cylinders interconnected with metal pipes that go from one tank to another. From filling station to fermentation and pasteurization, these highly automated equipment were imported from Thessaloniki, Greece.

The process of making yogurt is done before dine-in customers from behind a glass panel.

“We want to showcase how yogurt is made fresh and properly done for customers,” Galanakis says.

He also brought in Greek engineers and food technicians to oversee the production and train the local staff, who are all garbed in lab gowns.

The equipment can process 300 liters of milk, and it takes about eight hours to produce yogurt. The fresh milk is supplied every other day from Karlen’s in Angeles, Pampanga, (also the supplier of Santi’s Deli).

“The yogurt is made by fermenting milk with specific microorganisms, the probiotics, which must be plenty and alive in the final product and stay alive throughout the yogurt’s life,” says Galanakis. “I know people are used to being served with the so-called yogurt out there, which is powder mixed with water at the final stage in the machine, then frozen and served. It’s not live yogurt. What we have here is the real thing.”

“I know Greek yogurt is not yet popular here, but I am a person who always tries hard and I am confident that we will manage to make yogurt popular in the Philippines,” he adds.

The store offers plain yogurt, as well as yogurt topped with local fruit favorites like mango, strawberry and pineapple.

For a more unique taste typical of Greece, a scoop of yogurt can be flavored with “Spoon Sweets” jam or preserves like rose petals, quince, sweet cherry, strawberry, sour cherry, and blueberry.

The honey-sweetened concoction creates a nice, thick, smooth and creamy sensation in the mouth.