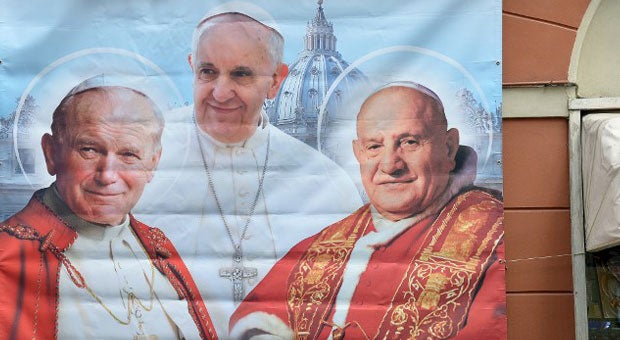 First at Vatican in 60 years

ROME—Pope John Paul II might have beatified more than a thousand martyrs and holy men and canonized almost 500 during his papacy but his canonization, along with that of Pope John XXIII on Sunday, will be only the first of a Pope in 60 years.

Critics of the joint canonization said the process of creating saints, long and tedious under Vatican rules, should not have been fast-tracked. But Vatican officials, including the postulators, or chief proponents, of the cause for canonization of the two Popes, defended the decision to have them declared saints.

Fr. Giovangiuseppe Califano, the postulator for John XXIII, said that Angelo Roncalli, as John XXIII was known before he became Pope, lived a holy life.

The postulator for Pope John Paul II’s cause, Msgr. Slawomir Oder, argued that the Polish Karol Wojtyla was a man of heroic virtue.

Before Pius X, the only Pope to be canonized was another Pius, the Dominican Pius V, who was Pope in 1566-1572.

Pius V, who implemented the reforms of the Council of Trent and rallied Christian Europe against the Ottoman Turks in the Battle of Lepanto, was beatified in 1672 and canonized in 1712.

Because of the long lapse of time, the joint canonization of John XXIII and John Paul II is seen as making up for lost time.

John Paul II himself beatified Ruiz and his fellow martyrs in Manila, the first beatification outside Rome in history.

When the most prolific saint-maker of popes, as well as John XXIII, who convoked the historic Second Vatican Council in 1962, are proclaimed saints on Sunday, they will become only among five Popes to be canonized in almost a millennium.

Of the 81, 48 were regarded as successors of St. Peter and they were all martyred, considered a sure sign of divine election.

In fact, the first Pope to be canonized in the second millennium before Pius V was Celestine V, a hermit who abdicated in 1294 and became known to the new century when his case was compared with that of Pope Benedict XVI, who resigned last year due to old age.

Celestine V was declared a saint in 1313, some 250 years before the creation of the Congregation of Rites that formulated the modern selection process of blesseds and saints.

The systematization of the canonization process means any candidate for sainthood will pass through the wringer. The process could take ages.

So strict was the process that in 1963, during the Second Vatican Council, Cardinal Leo Joseph Suenens of Belgium, a leader of the progressive faction, asked that the process be expedited to provide Catholics with “contemporary examples” of sanctity, rather than canonize those of previous centuries who could hardly be relevant for the faithful in the modern age.

Since he was a friend of John XXIII, Suenens, in the opinion of many, was pointing to the Pope as a “contemporary example” of holiness.

In fact, in the immediate aftermath of John XXIII’s death in 1963, there was a movement to canonize him by acclamation of the Second Vatican Council.

Although that didn’t happen, Paul VI opened the beatification process of his predecessor in 1965, and John XXIII—called “the good Pope”—was declared Venerable in 1999 and beatified by John Paul II in 2000.

A miracle is needed for a beatified person to be declared a saint, but Pope Francis waived the requirement in the case of John XXIII.

In a way, John XXIII was a beneficiary of the movement in the extraordinary ecumenical council he had convoked of fast-tracking the process of creating saints to provide modern men and women with examples of holiness.

There were also popular appeals for John Paul II to be declared a saint immediately after his death in 2005.

“Santo Subito! Santo Subito!” (Make him a saint immediately!)” roared the crowd gathered for his requiem Mass on St. Peter’s Square on April 8, 2005.

But the saint-making process was observed by his successor and good friend, Benedict XVI, hailed as the greatest theologian among Popes in the last two centuries.

In 2011, the Congregation of Rites attributed the miraculous curing of a boy with cancer to the late Pope after the patient had visited his tomb, so that Pope Benedict beatified his immediate predecessor.

Beatification, explained Father Villarroel, permits limited veneration of a person who had been martyred for the faith or had lived a very holy life.

In contrast, a martyr or a holy person declared a “beato” (blessed) must have a miracle attributed to him to qualify for canonization.

In 2013, a Vatican commission of doctors said the sudden recovery of a woman from terminal brain aneurysm immediately after John Paul II’s beatification in 2011 had “no medical explanation,” and the case became the second miracle needed for John Paul II to qualify for canonization.

Pope Francis immediately approved the bull of canonization and declared both John XXIII and John Paul II would be jointly raised to the honors of the altar.

In the Vatican, officials defended the decision to canonize against detractors, who said a second miracle was needed for John XXIII and who criticized him for calling the Second Vatican Council, which some felt was too liberal and too uncritical of modernity.

Other critics said John Paul II should not be canonized because he pushed back the reforms of the council and shabbily handled the child abuse cases that engulfed the Church toward the last years of his papacy.

Fr. Califano, the postulator for John XXIII, said that as a 15-year-old seminarian, Angelo Roncalli was already making resolutions that were intended to help him become a saint.

He said John’s papacy was characterized by a deep humility and he was both a shepherd and a father.

Roncalli, he said, opened new horizons by convening the Second Vatican Council and was a capable communicator who, by using simple every day expressions, succeeded in entering into the hearts of people.

Califano explained how the words “obedience and peace” were not just Roncalli’s episcopal motto but were at the root of his sainthood, characterizing his life at the service of the Church.

The postulator for John Paul II’s cause, Msgr. Oder, spoke of how the friends of Karol Wojtyla described him as a “future saint” because of his prayer habits and his reflections on the value of life.

Oder said John Paul II’s profound mysticism encouraged him to personally live out the mystery of God in his own life.

“Man of God,” Oder said, is the word that characterizes a saint and this applies to Wojtyla.

“He was a man who found the source of his life in God . Prayer for Karol Wojtyla was his air, his water and his daily bread,” he said.

Pope John XXIII launched Vatican II and then some