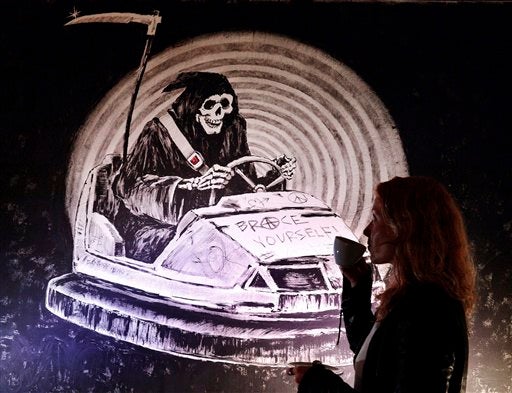 A restored wall graffiti artwork by famed street artist Banksy, is put on display to the public, Thursday April 24, 2014, in London. The artworks are taken from street walls, restored and presented for sale, valued at up to 1 million pounds (US $1.68 million). AP

‘Recovered’ Banksy works on display ahead of sale

LONDON  — Elusive street artist Banksy says he has nothing to do with an auction of several of his works taken from walls and valued at up to 1 million pounds ($1.68 million).

A statement on Banksy’s website Thursday said the “Stealing Banksy?” sale “has been organized without the involvement or consent of the artist.”

Banksy, who has never disclosed his full identity, began his career spray-painting buildings in Bristol, England and has become one of the world’s best-known artists.

The fate of his works has grown more contentious as their value has risen. Banksy’s satirical stencils swap hands for high six-figure sums; in February, his “Kissing Coppers” sold at a Miami auction for $575,000.

Seven works, including a giant rat and a girl with a red balloon, are being sold by Sincura Group, which says it prides itself on “obtaining the unobtainable.” Sincura was criticized last year for handling the sale of a Bansky mural whose removal from the wall of a north London store dismayed many locals.

The company insists it removes Banksy murals only when “approached by building owners and asked to remove artwork illegally painted on their sites.”

Sincura says the pieces will be exhibited at a London hotel until Sunday to explore “the social, legal and moral issues surrounding the sale of street art.” They will then be sold by online auction and sealed bid.

The works include an image of two children playing with a “No Ball Games” sign which was cut off of a shop wall in London last year. Sincura, which has valued the work at 1 million pounds, says proceeds from its sale will go to unspecified local charities.

That is unlikely to silence the company’s critics — though Banksy’s own denunciation of the sale ended on an ironic note.

“This show has got nothing to do with me and I think it’s disgusting people are allowed to go around displaying art on walls without getting permission,” he wrote.