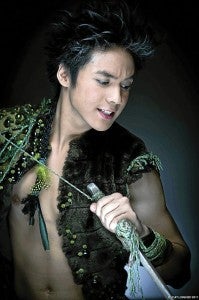 The Asian premier of a new musical version of “Peter Pan” will be staged by Repertory Philippines and Stages Production Specialists starting September 29.

Based on J.M. Barrie’s book, “Peter Pan: A Musical Adventure” will feature Sam Concepcion in the title role and Michael Williams as Captain Hook.

The story revolves around the boy who refuses to grow up, his visit to the home of the Darling siblings Wendy, Michael and John; and how he takes them to Never Land. There they have adventures with Tinkerbell the fairy, the Lost Boys, Indian sqaw Tiger Lily and her braves, mermaids, and Captain Hook’s pirates.

The musical’s book is by Willis Hall; music and lyrics are by award-winning duo George Stiles and Anthony Drewe (“Honk!” and the Disney-Cameron Mackintosh “Mary Poppins”).

Co-directors Jaime Del Mundo and Menchu Lauchengco-Yulo have assembled a design team to bring the show to life.

The production will be using Flying by Foy flying systems. The company is based in the US and its technicians will come to Manila to train the cast and crew on how to use and operate its systems.

Set designer Gino Gonzales knew from the get go that flying would be involved. Since he’s designed past productions that have involved flying, such as Ballet Philippines’ “Darna,” his first consideration was that he couldn’t design pieces that were too high.

“Also, the set has to be many different locations,” he says. “From the nursery in the Darling family’s home in London to many different places for Never Land’s many inhabitants.”

“Everything has to happen in one space,” he says. Given these parameters, Gonzales has created a “box made of shutters” for the all the action to happen in. He’s also “adjusted” the very long length of the Meralco Theater’s stage by adding legs (theater term for curtains or set pieces at the sides of a stage) to focus the action towards the center. 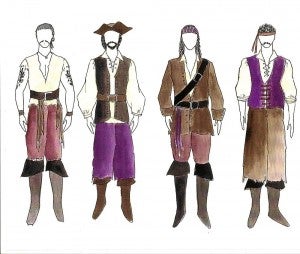 “When I studied the musical’s script, I noted  there were very many transitions from one scene to another. The way the music is written makes all the scene shifts very short. So this kind of set design allows for suggestive props and scenic elements to convey the different locations. Color will be conveyed through the costumes. All the scene changes will also be done in front of the audience. Part of the fun of watching this show is to allow your imagination to supplement what you see onstage.”

Populating Gonzales’ set are the actors who will be dressed in costumes by Raven Ong. Ong was recruited by Yulo earlier this year when he did the costumes for Rep’s “Shakespeare in Hollywood.”

“Both directors were very specific with the look and approach that they want for the costumes,” he says. “They gave me their directorial concept, ideas and adjectives for the feel that they want to achieve. It’s important to absorb and have the same vision as theirs. I then balance off their considerations with the way how I want to attack it as the designer.”

“That’s the challenge, how to re-create a classic. Something that you attempt to break but still needs to be acceptable to the audience. People are familiar with the story, especially the cartoon version, so the costume designs cannot be too unfamiliar either.”

Ong has created color-coded costumes for the characters “to make it easier for the audience to recognize characters.” Musical direction is by Jojo Malferrari; he will also conduct the live music for all performances. Choreography is by Deana Aquino and lighting design is by John Batalla.