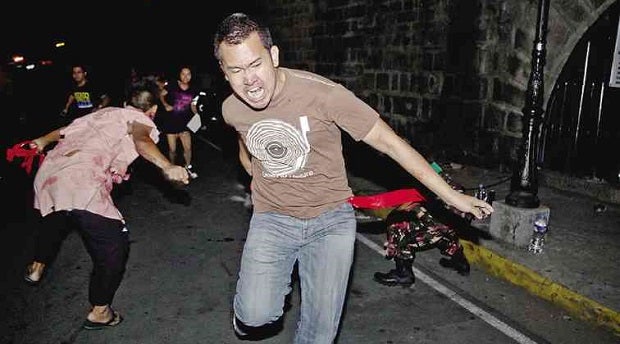 A RUNNER narrowly escapes a zombie

The streets of Intramuros were abuzz that night. Hundreds of people were trying to figure out where to go. It didn’t help that none in our group was familiar with the place. Add to that, the map we had was only a sketch of the entire walled city sans the street names or landmarks.

Suddenly, there was chaos. A horde of zombies jumped out of nowhere and chased us as we ran for our lives.

We ran a quarter of a kilometer, crisscrossing streets in our attempt to dodge the zombies’ bloody hands.

It was quite an intense start for Runtertainment Inc.’s “Outbreak Missions: Operation Stronghold.”

A story-based, real-life zombie adventure, “Outbreak Missions: Operation Stronghold” takes off from last year’s events in Filinvest. Upon Dr. Alfonso Adarna’s arrival in Intramuros to complete the zombie cure, he is held captive by the Brotherhood, a fanatical group with a sinister plan. Members of the rebel alliance successfully rescues Adarna but the doctor goes missing on their way out. It is now the participants’ task to locate the cure and decide whether to give it to Adarna or the Brotherhood.

Apart from finding the possible zombie cure, participants must also have at least one of three life flags intact for them to be considered as survivors of the zombie apocalypse.

Unlike previous “Outbreak” events in which the save-yourself mentality prevailed, “Outbreak Missions” encouraged teamwork. A station had one team member sacrificing one of his life flags for his team’s safe passage.

Teams are composed of 10 individuals, who possibly don’t know each other prior to the event. Since only four in our barkada decided to take on the zombie challenge, we were joined by the Olgado family and two random buddies we met right before we were released to the event area.

Initially, we thought that having kids in our group would be a burden. Surprisingly, siblings Aiyana and Anthony Olgado, 10 and 8 years old, respectively, proved otherwise—they were the most fearless in our group. They dodged zombies almost with ease. At times, mom Rowena would call out on Anthony not to make harsh decisions, making the experience more real not just for the kids but for us grownups as well.

Their father, Capt. Anthony Olgado of the Manila Police District, said that, in fact, the kids were the ones very eager to join the event.

“I was in charge of deploying security personnel for the event. I told the kids about it and they really wanted to participate,” Olgado said. “They’re so into zombie-theme games and movies.”

With a police officer and his family and a group of friends in the team, it seemed like we had for ourselves a local version of AMC’s “The Walking Dead.” (Though we still haven’t mustered the courage to finish the first season of the top-rating zombie TV series.)

Like in the series, decisions should be made wisely. At an intersection, our group chose to trek the dimly lit street over the well-lighted one, in the hope that the latter is a trap to lure us to the zombies.

A number of groups watched us, probably thinking that the zombies were waiting for us. Toward the end of the street, there was not a sight of zombies, but rather of panting participants who chose the well-lighted path, where the ghastly creatures chased them.

After joining two previous “Outbreak” events, we thought we were already immune to the feeling of being chased by zombies, but alas, we were wrong. At Fort Santiago, where zombies abound, we managed to snatch only one of four ingredients of the cure for the team.

The kids, however, were able to get three. (Shame on us, really.)

Unlike in past events, it was noticeable that the number of zombies has significantly diminished. Nonetheless, the fright experienced by participants is one for the books.

With the cure in our possession, we chose to give it to the rebel alliance, headed by Adarna’s wife Vera, to once and for all end the zombie plague. However, the Brotherhood was also able to obtain the cure as some groups decided to give it to them to control the undead.

As humanity’s fate hangs in the balance, we now patiently wait for the next chapter of the “Outbreak saga.” We do hope, though, that in the next installment, the event will start promptly. Or else, it might be too late to save humanity from the undead.